A Lone Star roundup of downballot races and more

Most of the political oxygen is being sucked up by the governor, lieutenant governor, and Senate primaries on both sides of the aisle, so with the deadline fast approaching -- as in Monday -- for Texans who are not yet registered to vote in March, an update on what's happening elsewhere in the left-right tug of war is overdue. 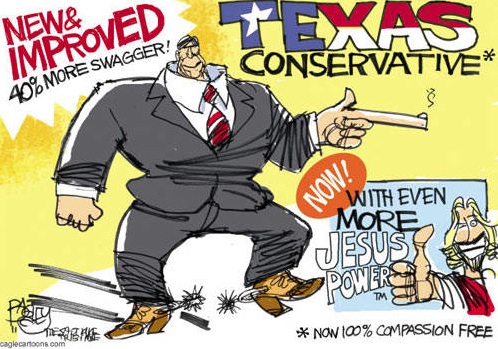 -- Before we move down the ballot, let's note that Dan Patrick has the endorsement of fringe-iest of the right-wing fringe mega-church pastors, John Hagee.  And say no more about that, because, really... what else can be said?

-- In the Republican primary for comptroller, Glenn Hegar says it's all about his money, and Debra Medina says no, it isn't.  Meanwhile, Harvey Hilderbran is saying he can do things even Bob Bullock could not do: bend the IRS to his will.  I suppose in the hypothetical comic-book matchup, Superman can beat up The Incredible Hulk, but only because the big green dude lets his anger get the best of him too often.

(If I have to explain that analogy, then it isn't as funny as I would hope.)

-- It's not all bad for Texas Democrats; the TXGOP are experiencing their usual difficulties counting their money.  Socratic Gadfly has the links from the Rockwall Herald Banner...

The Texas Democratic Party (TDP) has called for a criminal investigation into alleged illegal election activity at the Rockwall County Clerk’s office, according to a statement released by the organization Wednesday.

In addition, a letter requesting a “cease and desist from unlawful political fundraising activities” was also issued by Chad Dunn, general counsel for the TDP.

A statement from the TDP on Wednesday claims the Facebook page of Rockwall County Clerk Shelli Miller advertised the sale of tickets for  Saturday’s Rockwall County GOP Reagan Day 2014 event and that these tickets could be purchased in Miller’s office at the Rockwall County Courthouse.

Attorney General Greg Abbott is scheduled to be the keynote speaker at the event, and due to the involvement of the Abbot campaign in the Reagan Day event, the TDP has asked for an investigation into the alleged illegal activities to be opened.

“It is inexcusable to use taxpayer funded facilities for political fundraising,” TDP Executive Director Will Hailer said in the statement. “The Rockwall County GOP must immediately cease their unlawful activities. This is political corruption, plain and simple.

“A thorough investigation is warranted in this case and it is incumbent on the Attorney General’s office to put election year politics aside and move forward by appointing a special investigator.”

The Dallas County Republican Party failed to report more than $60,000 of transactions to the Federal Election Commission, according to a draft of an audit approved by the agency Thursday.

A transfer of $31,000 to a “non-federal” bank account was also unreported by the party. Since the county party works with both federal and state candidates, each facing different rules, it must keep separate accounts to take advantage of the less stringent Texas campaign finance laws.

Back to Gadfly with the wrap.

(S)ince current state Attorney General Greg Abbott, now running for governor, is the guest speaker at the February event, doesn't he need to recuse himself or something? Maybe appoint a Democratic special investigator?

How do you miss a $24K credit card donation, anyway?

-- The Chron endorsed John ManBoyLove in the Republican primary for CD-36, to replace Steve Stockman.  They had to pick somebody, I suppose.

--  Paul Kennedy has the state of play in the GOP primary for Harris County district clerk.


Four years ago (Republican) Chris Daniel won the race for Harris County District Clerk over the incumbent (Democrat) Loren Jackson. Under Mr. Jackson's leadership the District Clerk's Office moved out of the Stone Age and into something that resembled our modern times. Alas, Mr. Jackson won election to an unexpired term in 2008 on the coattails of Barack Obama (perhaps you've heard of him) and was swept out in the next election.

Mr. Daniel has moved forward with the changes Mr. Jackson made -- but with a bit more of an eye on the publicity side. He cruises around town in his gas guzzling Hummer with campaign signs in the windows. Subtle is one characteristic no one would ever use to describe Mr. Daniel. [...]

(T)here are some in the Republican community who are upset with Mr. Daniel. Chief among them is the head wing nut in Harris County, State Senator Dan Patrick. Now I wish I could find a clip of Mr. Patrick painting himself blue for an Oilers' playoff game back in the 70's but since YouTube didn't exist back then those clips are rare to find.

The darling in Mr. Patrick's eye is his former employee, Court Koenning. Why exactly he's running for District Clerk isn't quite clear. There isn't exactly what I would call a groundswell of opposition to the way Mr. Daniel is running the office.

Even more curious is Mr. Koenning's website with endorsements from leading wing nuts in Harris County.

I am still trying to figure out what being a liberal, a conservative, a Marxist or a neo-fascist has to do with running the District Clerk's office. Your job as clerk is to make it as easy as possible for folks to file suits and for the courts to get the filings they need. Your job is to make the process of obtaining certified copies of filings as painless as possible. Your job is to send out jury summonses. That's about it.

This is a lament that could be applied to every single primary contest on the Republican side.  Sid Miller (ag commish candidate) weighs in on Phil Robertson and Duck Dynasty.  Barry Smitherman -- boy, have we mentioned him here a lot -- Tweets a picture of a hangman's noose beside the names of Republican US Senators who favored last year's gun legislation in the wake of the Sandy Hook massacre.  Jared Woodfill passes judgment on Annise Parker's wedding.  Around and around that carousel goes, and where it stops...

While this is certainly no endorsement of Chris Daniel, it should serve as a warning about the creation of made-for-election issues. I would love to be a fly on the wall so I could figure out what's really going on behind the scenes with this race. My guess is it's being used as a battleground for a fight between the far right wing of the GOP led by Dan Patrick and the more moderate wing led by whoever leads the mythical moderate wing of the Republican Party in Texas.

More nicely said than me, and still makes the same point: if everybody in the Republican party wants to be like Ted Cruz, then where do the sane conservatives go?

And here's everything else you missed this week, some of it having nothing at all to do with politics.

Kennedy is probably a good DWI lawyer but he hasn't got a clue about the dynamics of HCRP politics.

He seems to have considerably more than just a clue, Unk. How hard can it be, after all?