You can do a sufficient job of washing your hands in the time it will take you to read this week's Texas Progressive Alliance blog roundup.  And you should be doing both.  Perhaps not at the same time.

COVID-19 claims South by Southwest as its most significant Lone Star victim to date. 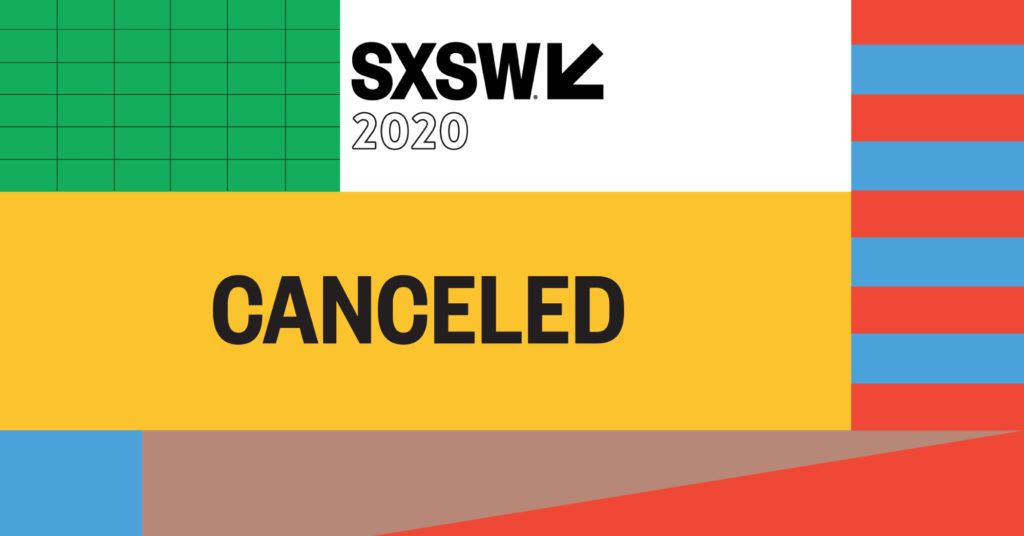 Austin's annual technology, music, and film festival has been canceled over fears of coronavirus, with the festivities just a week away.

The Dallas Morning News reported (Friday) afternoon that the Austin mayor Steve Adler said: “Based on the recommendation of our public health officer and director of public health, and after consultation with the city manager, I’ve gone ahead and declared a local disaster in the city, and associated with that, have issued an order that effectively cancels SXSW.”

Adler's state of emergency, and the festival’s corresponding statement, came despite the fact there were no confirmed cases of COVID-19 in Austin (as of Friday, March 6).

Out of concern for the many artists, waitstaff, and others whose livelihoods were dependent on the festival's thousands of attendees to help make ends meet, a campaign to #TipforTwo began.

All my Austin friends, here is your call to service. There’s also a #tipfortwo movement to help service workers, musicians and others affected by the cancellation. #sxsw #keepAustinfriendly https://t.co/gWF3hbkjgy
— Stephanie Elsea (@StephanieElsea) March 7, 2020

Ted Cruz placed himself under self-quarantine after he was informed that he interacted with a CPAC attendee who tested positive for the virus.

The pandemic is slamming nearly all sectors of the global economy, and Texas will suffer a pair of body blows as its fossil-fuel based companies take a hit from slumping demand just as the Saudi-Russian agreement to curb supply disintegrates.

While many drillers in Texas and other shale regions look vulnerable, as they’re overly indebted and already battered by rock-bottom natural gas prices, significant declines in U.S. production may take time. The largest American oil companies, Exxon Mobil Corp. and Chevron Corp., now control many shale wells and have the balance sheets to withstand lower prices. Some smaller drillers may go out of business, but many will have bought financial hedges against the drop in crude.

In the short run, Russia is in a good position to withstand an oil price slump. The budget breaks even at a price of $42 a barrel and the finance ministry has squirreled away billions in a rainy-day fund. Nonetheless, the coronavirus’s impact on the global economy is still unclear and with millions more barrels poised to flood the market, Wall Street analysts are warning oil could test recent lows of $26 a barrel.

With some post-election day news ... 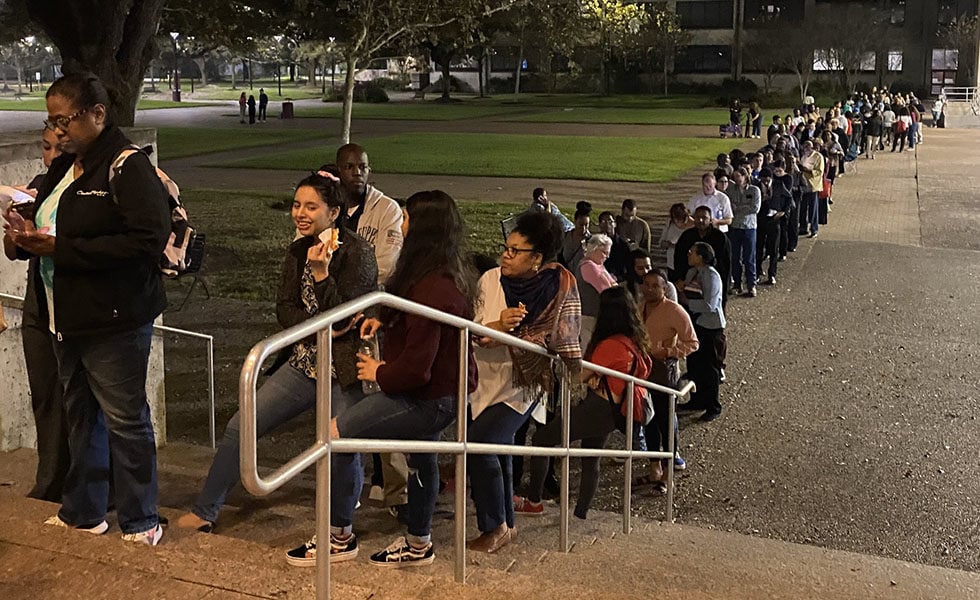 One of the biggest and most disturbing storylines to emerge on Super Tuesday wasn’t about any top-of-the-ticket race, but rather the shockingly long wait times as some Texas polling locations struggled to keep up with increased turnout.

Dallas County Election Administrator Toni Pippins-Poole is asking a district court to authorize a manual recount after her office discovered ballots from 44 tabulating machines were not included in the county’s election results, reported the Texas Tribune’s Alexa Ura. The staff discovered the error when it could not reconcile the number of voters who checked in to cast ballots and the number of ballots counted. It is unclear which precincts, and thus which races, could be affected.

One candidate who won without a runoff was former state Senator Wendy Davis, who garnered national attention in a bid for governor in 2014. She moved from Fort Worth to Austin to run in the 21st District and easily won the Democratic nomination to face freshman Republican incumbent Chip Roy.

Trump’s controversial former White House doctor, Ronny Jackson, advanced to a runoff in the Panhandle region's 13th District GOP primary, while Pete Sessions, a veteran Republican congressman who lost his metro Dallas seat in 2018, found more luck in Waco, where he too made a runoff.

However, the latest Bush family member to try to launch a political career, Pierce Bush, came up short in suburban Houston.

PDiddie at Brains and Eggs realized on Election Night that he should have been exposing the other fraudulent Latina in the Democratic primary opposite John Cornyn.

Ryan filed suit a week ago against 43 generic drug manufacturers, alleging they are fixing prices on "at least" 181 separate medications.

“These manufacturers routinely and systematically sought out their competitors in an effort to reach agreements to allocate market share and maintain or raise prices,” said County Attorney Ryan. “We intend to hold these pharmaceutical companies accountable for one of the most egregious and massive price-fixing conspiracies in the history of the United States.”

And both Progrexas and the Chron noted that being a male judge in the Democratic primary was hazardous to their re-election prospects.

Off the Kuff reported on the latest lawsuit filed by Texas Democrats, seeking to overturn the law against straight ticket voting in time for November.

Dos Centavos explored the story of the ghost of HD142.

SocraticGadfly said that as opposed to fearmongering by Greg Abbott and recent reporting by The Atlantic -- based on worse reporting by the Dallas Snooze -- Texas is not being Californicated.

Paradise in Hell is enjoying the fight between Dan Patrick and George P. Bush over the Alamo.

Durrell Douglas at Houston Justice documents how #ProjectOrange is helping inmates at the Harris County Jail exercise their right to vote.

Rick Casey of the Rivard Report reminds us that Texas was the first Southern state and the ninth in the nation to ratify the 19th Amendment, granting women the right to vote.

Rick Hasen at the Election Law Blog excerpts Roll Call to tell us that John Cornyn and Ted Cruz, alongside Lindsey Graham, are by far the largest beneficiaries of financial contributions from judicial nominees.  All three men sit on the Senate Judiciary Committee, which is tasked with approving federal judges submitted for appointment by the Trump Administration.


Before they put on their robes, dozens of federal judges appointed during the Trump and Obama administrations made significant campaign contributions to Senate Judiciary Committee members and their home-state senators -- the very people who could make or break their nominations.

And three Republican senators -- Ted Cruz and John Cornyn of Texas and Lindsey Graham of South Carolina -- got more money than the rest of the Judiciary Committee combined. Virtually all of those contributions came from judicial nominees they ultimately backed.

In the latest environmental developments ...

Houston has ten of the most toxic industrial polluters in the United States, according to a new report by the Environmental Integrity Project. A deadline in late August has been set for cleanup of a creosote-contaminated Union Pacific railyard in Houston.  The chemical's underground plume, a result of treating railroad ties for decades, was detected beneath more than 100 homes in the nearby Kashmere Gardens/Fifth Ward neighborhood.  There has also been a cancer cluster among residents.

Texas ICE officials are keeping migrants in jail with what appears to be illegal blanket parole denials, according to Felipe de la Hoz at The Intercept.

Immigration and Customs Enforcement officials in San Antonio have been systematically denying parole to large numbers of people who were detained after crossing into the United States hoping to apply for asylum. Instead of being allowed to join family or sponsors and work on their cases in the U.S., many migrants are being held without a chance of release while they wait for court dates.

According to documents reviewed by The Intercept and lawyers working in the area, ICE’s San Antonio field office has been refusing parole for any detainee subject to a new Trump administration policy known as the transit bar, which makes migrants ineligible for asylum if they did not ask for protection in countries they crossed on their way to the U.S. The bar applies to most non-Mexicans arriving at the southern border.

The Texas Central Railway is poised to begin construction, possibly by the end of the year.

David Hagy with Texas Central said the Texas High-Speed Rail, a 240-mile high-speed rail line meant to make a 90-minute commute from Houston to Dallas, is expected to complete its Economic Impact Statement and safety guidelines by this summer.

This station will be multifaceted, w/ retail, restaurants, offices, everything. It will become a gathering place for people, whether they ride the train or not. It will be this century’s version of the mall. -Holly Reed, Managing Director-External Affairshttps://t.co/CWXF9D9dxE
— Texas Central (@TexasCentral) March 6, 2020

Hagy said the Texas High-Speed Rail is expected to have $36 billion of positive economic impact on the city of Houston through 1,500 jobs needed for operation, faster economic connections between medical institutions, colleges and businesses between Dallas and Houston and tourism.

“You connect Houston and Dallas and you add in Bryan/College Station, Texas A&M, Blinn, Huntsville and Sam Houston State (University), you’re connecting about 42 Fortune 500 companies, about 83 Fortune 1,000 companies, over 30 academic institutions, meaning medical centers and universities, and over 350,000 graduate and undergraduate students not only fast, but reliably.”

And we'll wrap another Wrangle with some lighter items.

Organizers of Matagorda Bay Birdfest in Palacios are in high gear to make good on the promise that the fourth annual educational event connects people, birds, and nature.

Birdfest spans the weekend of Friday, March 27, through Sunday, March 29.

The small coastal town of Palacios on Matagorda Bay and its surrounding wetlands and estuaries offer a rich setting for experienced birders and adventurous beginners.

Nicholas Frank at the Rivard Report tells of a captivating rediscovered novel about WWII-era San Antonio, The Duchess of Angus.  The first excerpt from it is here, with more to come.