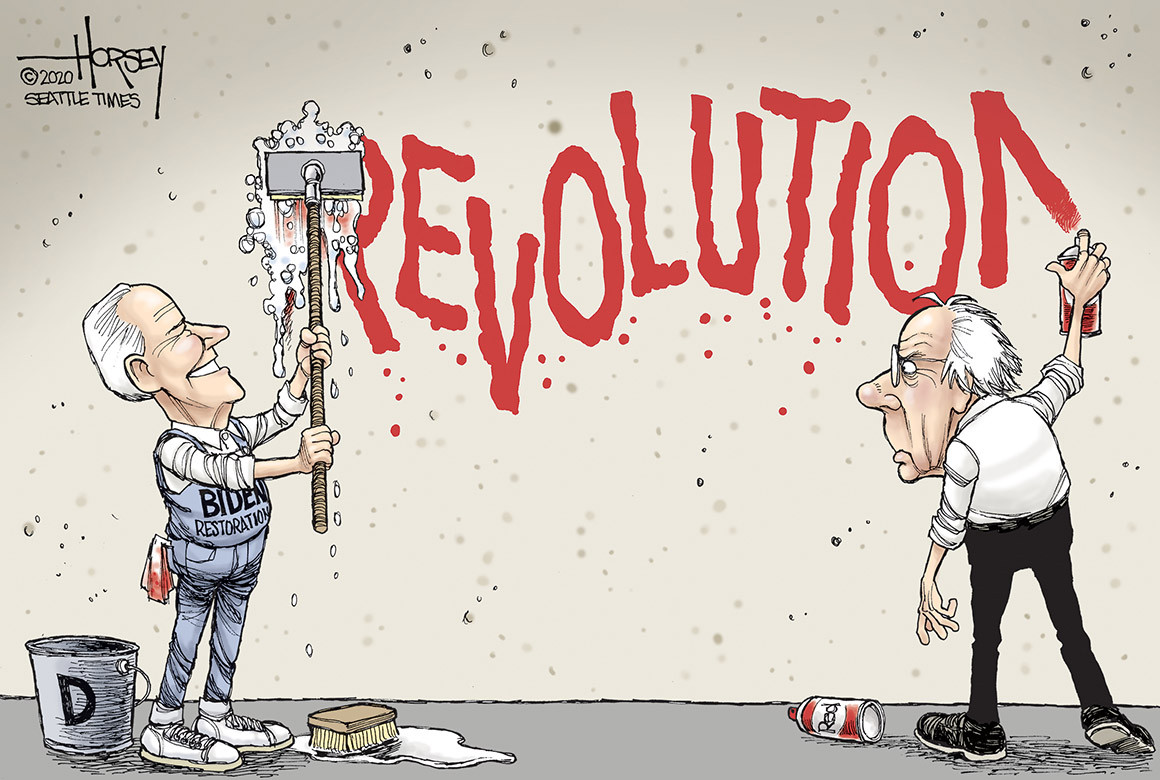 Voters in Florida, Arizona, and Illinois (made a choice yesterday) that goes beyond their preference for Joe Biden or Bernie Sanders. With Americans being urged to stay at home or risk infecting themselves and others with the coronavirus, they also have to decide whether they want to put their health on the line to cast a ballot.

Sarah Watts Wisniewski lives and votes in Illinois. She said that her husband cast his vote this morning, but she may not head out to the polls. “I’m not sure it’s worth the risk, since so many older people go vote, and I don’t want to expose them to anything unintentionally,” she said.

Multiple states have postponed primaries, most notably Ohio, where state officials called off the election last night because of health concerns. Others include Georgia and Louisiana, whose primaries weren’t slated to take place until late March or early April. But officials in the three states that chose to move forward with their elections say they expect everything will run smoothly.

“We’re dealing with it in a thoughtful way, but we’re not going to panic,” said Florida Gov. Ron DeSantis. “The fact of the matter is these things can be done in ways where you’re not going to have large crowds, because it’s just one vote.”

Not everyone agrees. Hundreds of polling places across the three states are shuttered, as many poll workers did not show up, citing health concerns. Election volunteers are typically older Americans, one of the most susceptible populations right now. Many polling locations were set up in nursing homes and assisted living areas, but those have been shut down, at least in Florida, causing state Democrats to demand a list of closures.

As no such list exists, many counties are trying to keep their constituents informed the best way they can, either by making their own local lists, or having people onsite to help direct people to their new polling locations. ...

Some citizens have self-quarantined, but will still show up to cast their ballots, like Katie Stitzer from Arizona. “We only have 18 confirmed cases statewide, and none in our county,” she said. “I’m not super excited about it since [Elizabeth] Warren is out, but I’m going to vote anyway, with my hand sanitizer.”

The results -- not to mention the outcome -- were predictable.

“A functioning democracy should not have this,” one person trying to vote said.

Voter in Florida reported mid-day that all polling places in her county were closed. She had choice to stand in room packed with hundreds of people, risk her health, or go home and not vote. https://t.co/WYzY7gxKu2 #FloridaPrimary #coronavirus pic.twitter.com/MYKqQZ84B2
— Kevin Gosztola (@kgosztola) March 18, 2020

While announcing that over a third of polling locations in Maricopa County, AZ will be closed, the Election Day Director says "I'm sorry, I can't do this." and walks off the podium. Notice his nervous demeanor. 🤦‍♀️🤦‍♀️🤦‍♀️
pic.twitter.com/X3AA995MaO
— FiorellaITSRIGGEDIsabel🌹🔥 (@Fiorella_im) March 14, 2020

Politicians of all stripes expressed frustration Tuesday after Ohio's primary was postponed until June by the state's elected officials amid concerns attendance at polling places would contribute to coronavirus pandemic.

The Ohio Democratic Party sued Tuesday afternoon over Secretary of State Frank LaRose's decision to set a new date, saying that power rests only with the Legislature. Messages were left seeking comment from LaRose, a Republican, and the state attorney general, who represents him.

The state's top health official, Dr. Amy Acton, cited the need to contain the pandemic in calling off the election hours before voters were supposed to cast ballots Tuesday morning.

Kudos to Ohio Governor Mike DeWine for SOMEHOW predicting that an election during a pandemic was a bad idea.

Shame on Arizona, Florida, and Illinois for putting people at risk and worsening a pandemic, while disenfranchising voters who are smartly staying isolated. https://t.co/Pcwz2yyAJ6
— Sunrise Movement 🌅 (@sunrisemvmt) March 17, 2020

Democratic state chairs in primaries still on the calendar understood there would be a price to pay that was beyond, you know, people's lives and health.

No exit polls because that would require violating social-distancing protocol, but it's a-okay to let millions of people go to the polls in a pandemnic because the DNC disregards the CDC's call to cancel events with 50+ and all medical advisory for people to shelter in place. https://t.co/kEbmuTJDF8
— The Bern Identity (@bern_identity) March 18, 2020

Because Landslide Joe was going to win anyway, right?  Might as well keep those MSDNC interns safe in the studio; they're not getting paid much more than an unemployed bartender anyway.

And it's not as if the exit polling has been all that good.

Please #DontBeASpreader of #coronavirus - Do, however, spread the #ExitPolls information far & wide until it can no longer be ignored. Our democracy is being stolen in full view & no one is saying a damned thing. https://t.co/E1i0UQgn2K pic.twitter.com/8luOlz5ZLZ
— 🌹 Daniel O'Meara 🌹 (@DanielSOMeara) March 17, 2020


As I understand it, the CIA has overthrown governments in countries whose elections demonstrate lower percentages than these.

So is there a plausible case to be made for this?

Once the news networks reported former Vice President Joe Biden was the winner of all three primaries, Biden appeared via livestream from his home in Wilmington, Delaware. “This is a moment, where we need our leaders to lead.”

“It’s also a moment where the choices and decisions we make as individuals are going to collectively impact on what happens, make a big difference in the severity of this outbreak and the ability of our medical hospital systems to handle it,” Biden added.

What he declared was rather hypocritical. Biden likely secured an insurmountable delegate lead over his opponent, Senator Bernie Sanders. But he also showed zero leadership, put his base of elderly voters, who have overwhelmingly supported him, at risk, and his campaign disregarded CDC guidance to a degree that likely resulted in dozens of people becoming infected with the coronavirus because they believed what they claimed about how “safe” it was to vote. 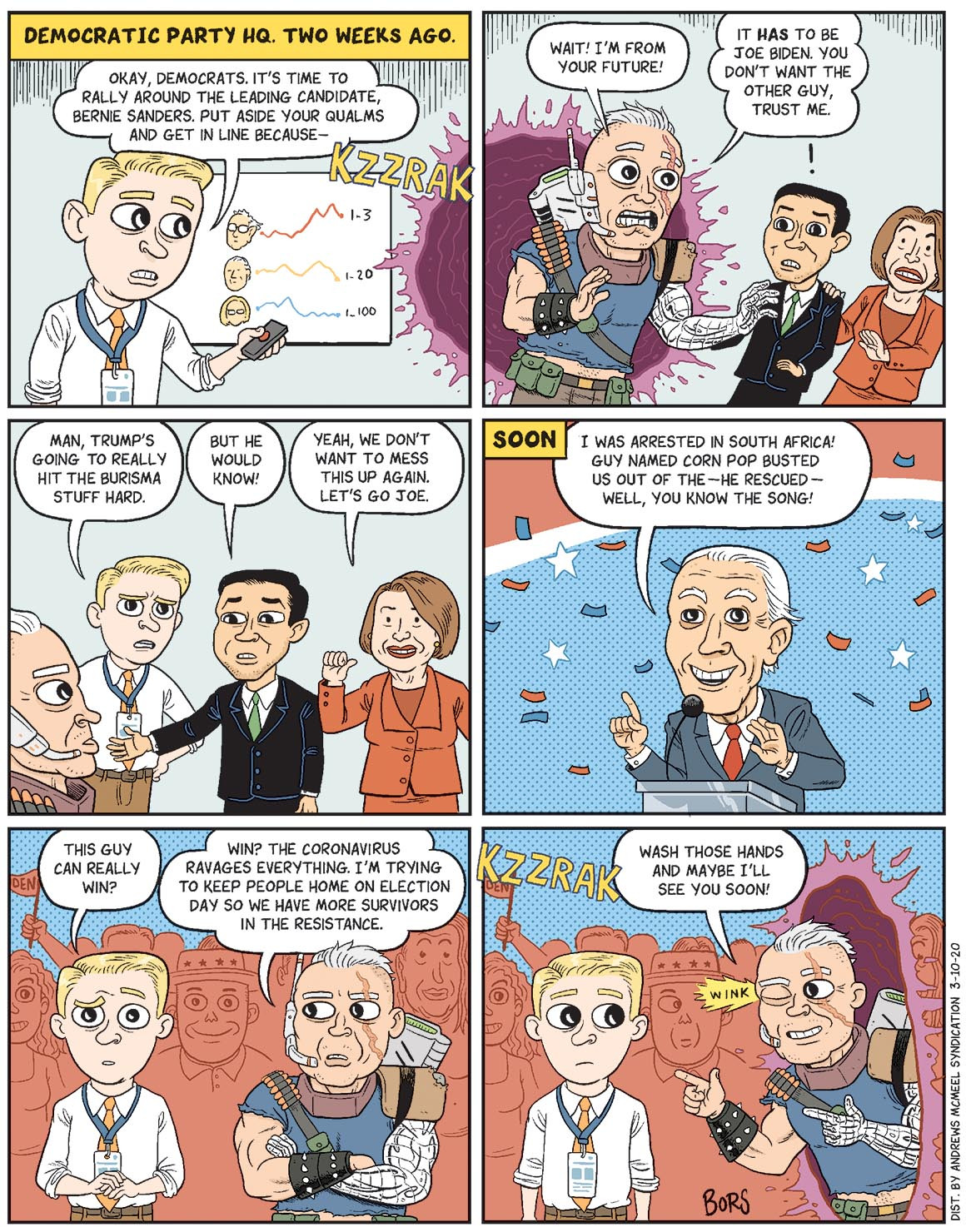 Alas, it does not seem that Bernie is going to make that case at this time.

Sanders may have skipped the traditional election night speech but he did hold a live-streamed event on Tuesday evening and rolled out a proposal for counteracting the potential looming recession from the coronavirus: $2,000 monthly cash payments to every household for the duration of the crisis.

The live-stream was, almost unintentionally, an encapsulation of where Sanders is in the race: a candidate pressing more for his ideas than himself -- and wedded deeply to the platform that running for president provides his agenda. Sanders urged that any fiscal countermeasures from Washington to the pandemic would not amount to “another money making opportunity for corporate America and for Wall Street.”

Still, some members of the Sanders team seem to be itching for a prolonged primary fight, even as few know what exactly he and his wife, Jane, plan to do next.

Sanders made one other announcement on Tuesday: that he had processed more than 10 million contributions in his 2020 campaign, adding up to more than $191 million.

That includes $2 million on Sunday, even as the nation was facing a financial standstill from the mass closures of businesses and “stay home” edicts from health officials.

In other words, Sanders is likely to have the money to keep running if he wants to.