Bernie strong as always.  Biden lost again, right from the get-go.  Warren got the fifth-most speaking time, not enough to call it a good night for her.  Buttigieg took incoming and withered (hey, he's the one claiming war duty).

Klobuchar consistently gets good marks from the talking heads, and they're universally perplexed as to why it's not translating into votes (it is, just not enough).  There are blindingly obvious reasons for this, which is why they are blind to them.

More on the top five from Jessa Crispin at The Guardian:

CNN aired this drawing by a young trans girl of Pete as a rat as an example of the uncontrollable violence of the detestable Bernie Bros. It had 22 likes prior to airing the segment. They are also up in arms about post of a cartoon turd https://t.co/eIuXPE4XRc pic.twitter.com/EB3po7jdM9
— BigQualityControl (@TSBigMoney) February 7, 2020


Here we are gathered together during the Year of the Rat, and I regret to report that Pete Buttigieg is ascending. I kept waiting for his fellow candidates to go after him for little things like, oh I don’t know, claiming victory over a caucus before all results were tallied? Minor despotic behaviors, that sort of thing? Instead, we heard mostly the same talking points coming from the same candidates who were almost all wearing the same outfits from the last debate. Is that Klobuchar dress plum or more of an eggplant? I’ve seen it so much by now you think I would have figured it out. (Is it just me, or does she spend most of her time on the debate stage explaining to people why they should like her more? Like someone who realizes she’s about to be broken up with suddenly listing out all their best assets?)


Steyer and Yang: At least the half-decent billionaire has stopped staring into the camera with each response, but his appeals for a middle path will go nowhere.  Yang spoke least, and the Gang is pissed again.  Both guys are going to get tired of pissing money away sooner than later, I suspect, and both should endorse Bernie when they reach that point.

So I will just be Tom Steyer yelling from the margins of the stage PULL IT TOGETHER for the rest of this campaign. While some of the Democrats have gotten better at addressing the lived experience of people in the country, most are still speaking in broad ways that don’t connect.


James Carville said this too, though he was praising BootEdgeEdge and damning Bernie when he said it.  Carville is nucking futs but the Caucasian Washington establishment drools over him.  There are, to be sure, elements of 'not getting it' that ring like a fire alarm.

Whenever abortion is discussed on the stage, it’s always in terms of “protecting Roe v Wade,” and not the massive crisis of accessibility that is going on in most states, with clinics closing, prices rising, and distances traveled for care increasing. It’s easy to talk about “rehabilitation” being the solution to the opioid crisis, but no one talks about how ineffective, expensive, and dangerous treatment facilities are in this country.

It’s hard to talk in specifics when you’re given 75 seconds to address structural problems, but the distance between political speech and actual reform never seems to stop growing. It was the exasperated, exhausted outliers at the ends, Yang and Steyer, who spoke the most directly -- Yang channeled Marianne Williamson there for a second, talking about the “disease” of American society that Trump is but a symptom of -- but they are just biding their time, hoping if they stay in long enough they can force a cabinet position somewhere. The inevitable debate confrontation with Trump is coming, and only Bernie Sanders and the single-digit losers seem ready for the fight.

Bloomberg:  He's still not losing, so when he finally shows up in Las Vegas he should catch a lot of well-deserved shit.

As for the pundits, Cillizza hit more often than he missed this go-round, except for his take on Sneaky Pete.  This was spot on, and if you noticed at the start, the sound was messed up too.

* Lighting: Was it only me who fixated on the fact that the candidates' faces were well-lit but their hands were basically in the dark? Just a weird thing -- particularly for those candidates -- Bernie, I'm looking at you -- who gestured a lot with their (unlit) hands. 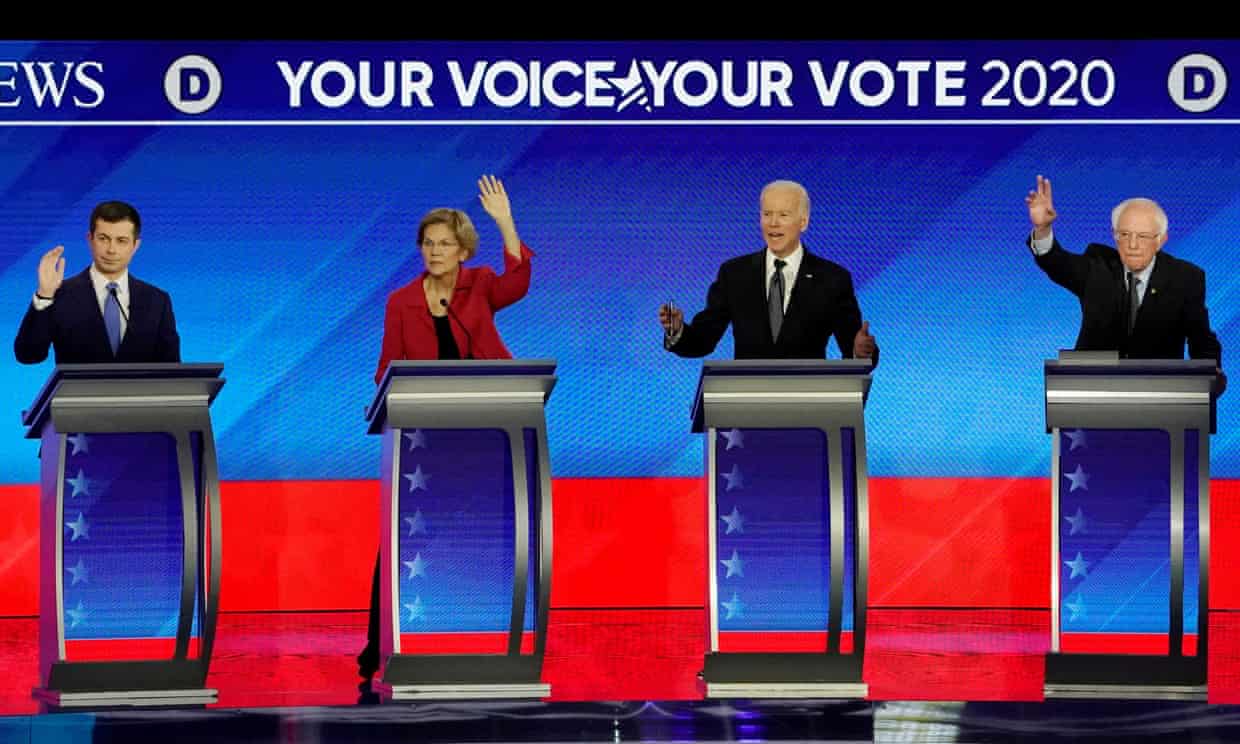 Van Jones, another guy who tends to piss me off too often, did so again last night.

During a post-debate analysis, Jones reacted to a moment in the New Hampshire debate where all the candidates except one, Sen. Amy Klobuchar, put up their hands when asked if they were worried about a “socialist” (i.e., Sanders) at the top of the 2020 Democratic ticket.

“Joe Lockhart and I did the three count. Three Mississippis, before Klobuchar put her hand up,” host Chris Cuomo noted. “[Sanders] has been redefining the word. Can it be redefined in a way that works in America?”

“I don’t know if he can,” Jones said, before explaining that his take that the term is more problematic than Sanders’ actual agenda. “For his young supporters, they call themselves socialists, but they really just seem to have, like, grandparent envy. In other words, their grandparents pretty much get to see a doctor for free. And want the same thing. Grandparents went to college for $4 a semester. And they want to do the same thing. Why call yourselves socialist? You basically just say: ‘Grandma and grandpa, I want what you had.’ The idea that is some socialist revolution or whatever. This is not the socialist revolution we heard about in the ’60s and ’70s. And I think the label does harm when the policies are pretty reasonable.”


It's a generational difference for sure, and Jones' POV -- elitist and stale -- is coming from the grands'.  Chris Matthews, Exhibit A.


Chris Matthews ON AIR claiming that if “the reds won” he’d be executed in Central Park and Bernie Sanders would be cheering it on.


All evidence suggests that the yoots outnumber Boomers, especially those with this mindset, and they were the ones who got the job done in 2018.  Will they save their generation -- and the world -- from incrementalism and turn out in 2020?  I expect so from anecdotal observation, but I need confirmation.  I can at least predict that they will do a lot better than the (older) Latinx bloc, which apparently is still sitting around with its arms crossed waiting to be catered to.

What Twitter had to say: An extremely valuable round-up (for me).