Weekly 2020 Update: They Drop Out in Threes

And so long (for now at least), Kamala.


Somewhere in the bowels of the archives here (I really should have started tagging posts years ago) is one that contains a prediction that Senator Harris would be there at the end, wherever the end happens to be.  She was a contendah briefly, after all, and I wasn't the only one who thought she had more than enough potential.  But identity politics can only carry you so far this cycle, and she never had firm positions on policy, vacillating from day to day, M4A being the most obvious example.

Yes, Tulsi Gabbard crushed her early on, but in truth Kamala was unable to adequately defend an abysmal prosecutor's record in the #BlackLivesMatter era.  And yes, she is held to a different standard than Crime Bill Joe Biden.  But that's on his support base of older African Americans, and not her progressive detractors.

When she started falling in the polls in California -- which was moved up on the schedule specifically to facilitate her nomination -- that was everybody's clue that she was toast (IMO).  And then OK Bloomer plunges in, and almost instantly polls ahead of her.


So before she were to suffer an embarrassing defeat in her home state primary, revealing weakness that some ambitious California Democrat might take advantage of should she run for re-election to the US Senate in 2022, she chose the wiser course.  And she has a great deal of political viability remaining next year as a potential vice-presidential nominee or attorney general-designate for the eventual Democratic standard-bearer.

There's lots of bitching and moaning about #PrimariesSoWhite, and that's absolutely a huge problem for the Donks, but they aren't capable of doing anything about it four years from now, never mind in 60 days.  Complain to your DNC member (last time I looked, not many of them were white men).

While my first impression is that many of her supporters are headed to Elizabeth Warren, this Morning Consult poll suggests that Biden and Bernie and Liz all pick up a percentage point, which doesn't alter things to any significant degree. 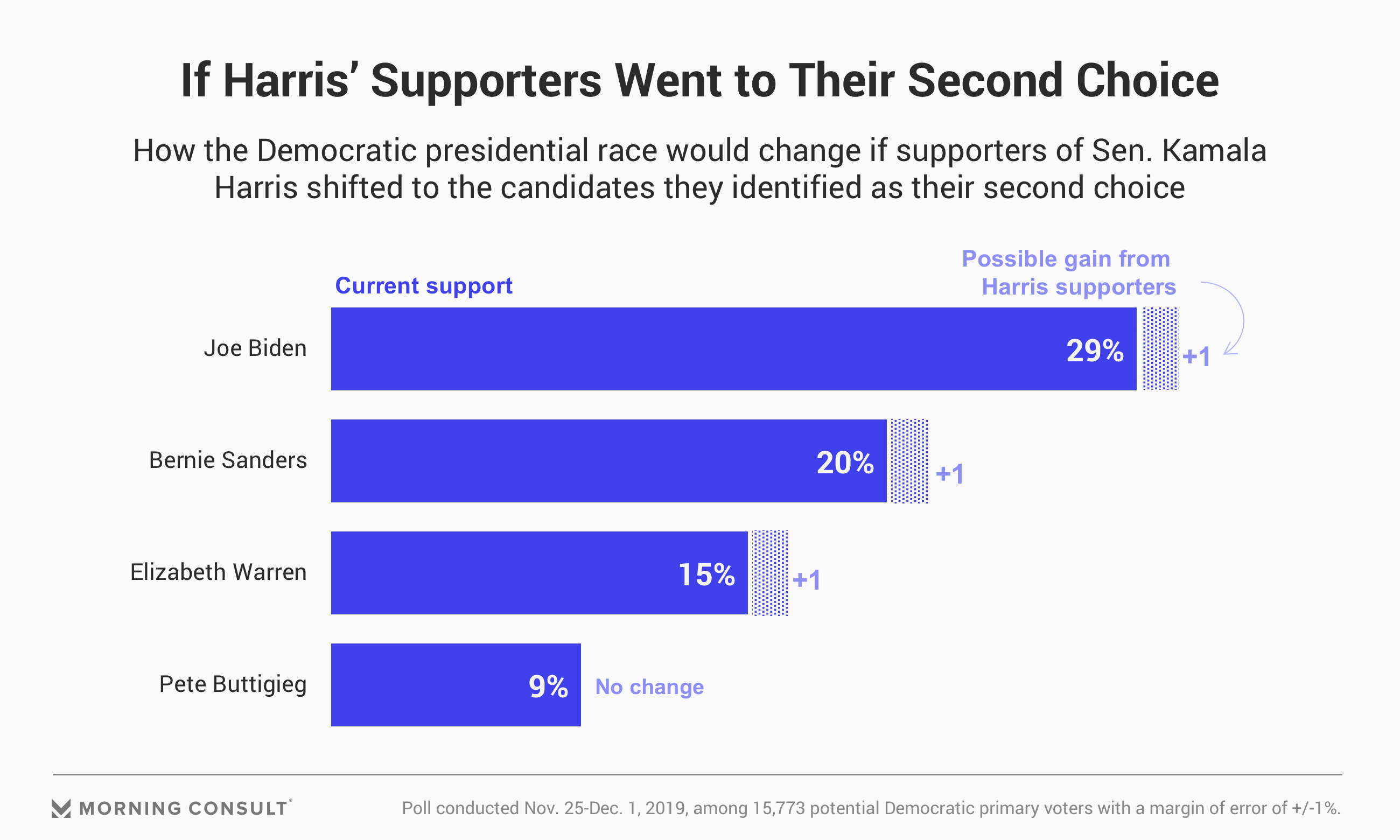 Let's move on to the remaining horses in the race.

-- Is this worse than sniffing other women's hair, rubbing their shoulders, or groping young girls?  I don't think so, but only because it's his wife.


Joe Biden just bit his wife’s finger on stage at a campaign event.

What on earth is even happening? pic.twitter.com/XzgNNFFHYA
— Benny (@bennyjohnson) November 30, 2019


On the other hand, this is really weird.


JOE BIDEN: "I got hairy legs that turn blonde in the sun. The kids used to come up and reach in the pool & rub my leg down so it was straight & watch the hair come back up again. So I learned about roaches...”

“I love kids jumping on my lap."


Snopes rates it factual.  He said it in 2017, at the same time he related the story about Cornpop.  And it's already been meme'd, long form.


Creepy Joe Biden story has come to life in this video and can’t be unseeing. “And by the way I sit on a stand, I got hot, I got hairy legs that turn, that, that, that, turn blond in the sun,” Creepy Joe Biden 2019 Campaign Trail pic.twitter.com/ST3jiGuVN0
— boomerwasmyfathersname (@AppelAngie) December 3, 2019

-- What is happening with Elizabeth Warren? Chris Cillizza says it's because she got attacked in the debates for Medicare for All, and face-planted when she couldn't justify her support.  I think he's got it partly right, anyway.

Warren proved that she's a poor debater and that she prefers a public option to Medicare For All. THAT's why her poll numbers are flagging. https://t.co/xJ6Er7jwEg
— Scap 🌹 left turn at Albuquerque (@scapelliti) December 3, 2019


Yet if all you watch is corporate media -- and yes, NPR, funded by Big Oil, is corporate -- then you're getting an entirely different message about Warren and M4A.


A lot of the Democratic voters I've talked to "like Elizabeth Warren. They just think she's poisoned herself with Medicare for all," and so they've gone for Pete Buttigieg, @nytdavidbrooks says. pic.twitter.com/atubBQ4CeK
— PBS NewsHour (@NewsHour) November 30, 2019

“I think it’s that Medicare for All is poison,” said a senior aide to another 2020 Democrat. “It is fucking poison. You touch it, you turn to dust.”


I'm sure it couldn't be a talking point from those consultants hired to trash Medicare for All.  It never ceases to amaze when a former Republican runs off the reservation.


The idea that supporting Medicare for All has hurt Warren among Democratic primary voters is some of the worse punditry. First, Sanders supports MFA and hasn’t slipped in polls. Second, Dem voters overwhelmingly support MFA. Come on folks.
— Matthew Dowd (@matthewjdowd) November 30, 2019

You would never know from the TV pundits that 81% of Democrats support Medicare for All & 77% support a wealth tax. If you believe our nominee should reflect the views of voters, isn’t it obvious that all Dem candidates should be for M4A & a wealth tax? https://t.co/c3UeeRoaOp
— Ro Khanna (@RoKhanna) November 30, 2019


Warren has long been a surrogate for Sanders in the punching bag department.  The Talking Heads ignore him and focus on her because they don't see his candidacy as having any chance.  To that end, Liz has served Bernie's cause quite well.  As the primary continues to distill to two moderates -- Biden and Buttigieg -- and two progressives, the focus will be sharply on the differences between the factions as well as within them.  If you're a fan of early predictions, say that Mayo Pete takes Iowa with Bernie and Liz splitting the rest.  The story will be who finishes third.  Then comes New Hampshire, which at this early juncture is a face-off between next-door neighbors Warren and Sanders.  Nevada, a pure tossup, will give somebody a boost of momentum.  But whoever hasn't won a state by then, heading into South Carolina where Biden is heavily favored, will be facing the loudest calls to stand down.

It may not be clear until after Super Tuesday in early March, when the winners of California and Texas and other diverse delegate-rich states are known, but there are likely to be just two left standing by then: one corporate centrist and one progressive.  For at least two years now, I've thought it would be Biden and Bernie.  I still think that.

-- Why is Bloomberg betting big on Texas?  (The article does not answer the question.)

Bloomberg’s self-funded presidential campaign, launched just over a week ago, has already spent at least $6.2 million on ads in Texas, including at least $2.25 million in the Houston area alone, according to an analysis by the research firm Advertising Analytics. The campaign has so far spent more only in California, and the Houston market ranks third in the nation, behind New York and Los Angeles. Dallas ranks just after Houston, at nearly $2 million. Bloomberg spent $671,000 on ads in San Antonio, the analysis shows.


Bloomberg already has double the earned media in a month than Andrew Yang has for the duration of his campaign.  They're not talking about his scandals, and they're not talking about his long history as a devout, if moderate, Republican.  And how does he qualify for the debates if he isn't taking any individual contributions?  Will the DNC change the rules for him if suddenly turns into a contender?

Okay then; who's ready for some snark?


"I realize that some of the things I’ve done as mayor and said on the campaign trail aren’t going to play as well with this constituency, although, to be fair, I’ve only just realized that they’re a constituency." https://t.co/956xIT6XY2
— The Onion (@TheOnion) December 2, 2019

Kamala Harris Supporter Insists Her Inspiring Message Of Something Or Other Will Always Live On https://t.co/kSz17K2dDq pic.twitter.com/ODgt8d6bcu
— The Onion (@TheOnion) December 3, 2019