The Texas Progressive Alliance reminds you that TODAY is the last day to register to vote in the March 6 primary.  Here's the blog post and news round-up from last week ... 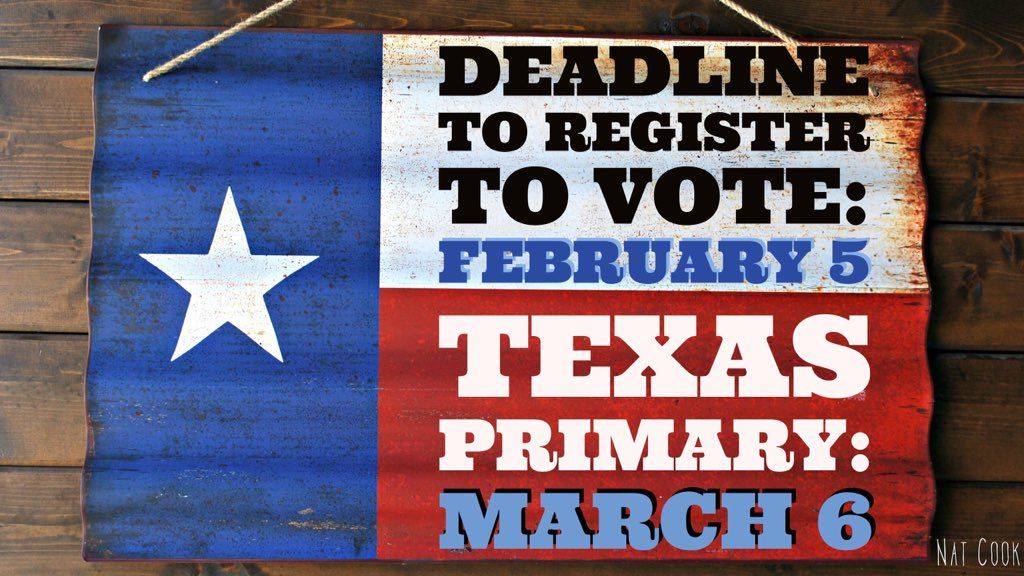 The Houston Chronicle reports that 175,000 voters in Harris County have been marked "in suspense", many due to having their homes destroyed by Harvey.  The good news?  They can still vote.  From Democratic activist Jerry Wald, via Facebook ...

To clear up misinformation regarding Harris County residents displaced by Hurricane Harvey being taken off the voter rolls:

Voters on the Harris County Voter Registrar's "Suspense List" are ELIGIBLE TO VOTE. If your voting status is in suspense, you will need to update your address information by filling out a "Statement of Residence" form at the polling location when you go to vote.

Harris County Tax Assessor-Collector Ann Harris-Bennett wants every eligible voter in Harris County to be able to exercise their right to vote. She is here to help take the suspense and myths out of the voter registration process. She's proud to say that Voter Registrar Division have registered more voters, and trained more volunteer deputy voter registrars than any other in the history of this office.

Please help get this message out to others by sharing this email with your family, friends, and neighbors. Contact the tax office at voters@hctx.net or 713-274-8387 so they can help!


Socratic Gadfly says that Beto O'Rourke appears to be a ConservaDem or something halfway close.

This evening in Clear Lake, CD-36 candidate Dayna Steele has a fundraiser hosted by two friends from her 'Rock Goddess' days: Melissa Etheridge and David Crosby.

John Coby at Bay Area Houston re-enters the fray with a handful of snarky campaign finance report postings.  They follow the same tired cliche' that the establishment believes is canon: whoever raises the most money wins, or should win, or should at least be considered the front-runner (irrespective of their political stances on any issue), and the ones who raise the least money should drop out.  This is no way to run a democracy, but far too many Democrats just don't get it.

In a stunningly appropriate metaphor, Congressional Republicans traveling to a weekend retreat to discuss the impact Trump will have on their 2018 prospects were on a train that hit a garbage truck, killing the poorest (the sanitation workers) but leaving the politicians only a little shaken.

The Dallas Observer has news of the grand opening of the first cannabis oil dispensary in the state.

The AP, via the Beaumont Enterprise, is following the case of four Texas youth prison guards who were arrested after they choked a 19-year-old unconscious and badly beat another.  In the past year, at least nine officers of the Texas Juvenile Justice Department have been arrested on abuse or misconduct charges, and another was convicted of having sex with a youth in custody.  The still-unfolding crisis has so far prompted Governor Greg Abbott to replace the agency's top officials and launch yet another investigation.

The Texas Standard wants to know how gerrymandering might be solved, and has news on a group of mathematicians who gathered in Austin over the weekend to work on the problem.

There is a public hearing tonight for Houston-area residents (specifically, it's being held at Woodward Elementary in Cypress at 6 p.m.) regarding the Texas high speed rail line, according to HPM.

jobsanger sees Trump's deregulation as a war on workers.

Free Press Houston notices that the attorneys representing roadside megastore retailer Buc-ees are an aggressive and litigious bunch when it comes to "protecting" their logo.

And Harry Hamid celebrates a blogaversary with David Bowie and Marlene Dietrich on the ramparts.
Posted by PDiddie at Monday, February 05, 2018