Your smearing of Laura Moser last evening may have just pushed her into the runoff. 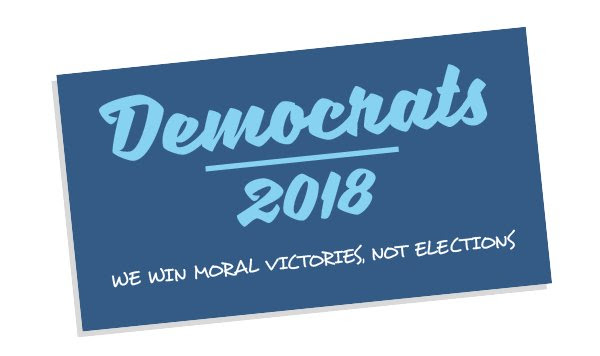 For those still not operating in the Twitterverse, the #TX07 hashtag trended briefly nationwide as reactions to this (first, I believe) from the TexTrib's Abby Livingston:


The DCCC is going nuclear on a Democratic Congressional candidate in Texas. In three cycles of covering these races, I ain't seen anything like this. Story to come soon. https://t.co/UxXgn5nsT5 #TX07
— Abby Livingston (@TexasTribAbby) February 22, 2018

The Democratic Congressional Campaign Committee posted negative research on Moser, a Houston journalist vying among six other Democrats in the March 6 primary to unseat Republican U.S. Rep. John Culberson. Democrats locally and nationally have worried that Moser is too liberal to carry a race that has emerged in recent months as one of the most competitive races in the country.

The DCCC posting, which features the kind of research that is often reserved for Republicans, notes that Moser only recently moved back to her hometown of Houston and that much of her campaign fundraising money has gone to her husband's political consulting firm. It also calls her a "Washington insider."

But DCCC spokeswoman Meredith Kelly went even further in a statement to The Texas Tribune.

"Voters in Houston have organized for over a year to hold Rep. Culberson accountable and win this Clinton district," Kelly said.

Then, referring to a 2014 Washingtonian magazine piece in which Moser wrote that she would rather have a tooth pulled without anesthesia than move to Paris, Texas, Kelly added:"Unfortunately, Laura Moser’s outright disgust for life in Texas disqualifies her as a general election candidate, and would rob voters of their opportunity to flip Texas’ 7th in November.”


And it was on like Donkey Kong from there.  Go read a sampling of top Tweets here.  The geek fighting kept going for a few hours after dinnertime.  Samples:


The slime-buckets at the DCCC are on the warpath against progressive candidates everywhere in the country. You think I'm exaggerating? Look what they're doing to destroy Laura Moser in Houston's #TX07 right in the middle of early voting:
— Howie Klein (@downwithtyranny) February 23, 2018

I’m confused why the @dccc likes me enough to call on a regular basis asking for money but doesn’t trust me enough to cast my #TX07 ballot, trust me, I’m looking for a Democratic progressive, and found one in @lcmoser, this move makes me think less of the dccc, back off.
— Greg Fleischaker (@GregFleischaker) February 23, 2018

@DCCC, how is this okay? You have NO business telling people how to vote! I have no dog in this fight and don't care who the folks in #TX07 support, but you're wrong a lot so just let voters decide. In this article, you sound like tyrants, not Democrats. https://t.co/ihappAmazP
— Victoria L. Nadel (@2dSentence) February 23, 2018

@dccc Your intrusion into the #TX07 is awful. What you are doing to Laura Moser and the people of that region of Texas is awful. I'm a lifelong Democratic voter and I am disgusted by this. I will not donate a penny to the DCCC and I will dissuade my friends from donating as well.
— Miles Howard (@MilesPerHoward) February 23, 2018

"Her grandfather arrived in Houston in 1942 as a refugee from Nazi Germany" #TX07 😠 DCCC is OUT OF BOUNDS https://t.co/NKd4igimYI
— The Third Summers Brother🍕 (@hugetinymistake) February 23, 2018

By openly trying to destroy a well-known candidate in their primary field in #TX07 , the @DCCC is saying very clearly to all of her supporters, “none of you are welcome in the Democratic Party.” 🙄 bravo.
— patrick dillard (@pcdillard) February 23, 2018

Keep your hands of off the #TX07 race, you centrist hacks. Telling Democratic voters which Democrat they should support in a primary is not democratic. #Truth
— Mike M (@MicMej231997) February 23, 2018

@dccc needs to get out of the way. If they don’t like progressive then that’s their dam problem. The Revolution is here whether you like it or not... @lcmoser #MoserMob #TX07 https://t.co/FcPC2mcRpd
— Bryan Madrigal (@b_mad_) February 23, 2018


That's probably enough for you to get the gist.  Scroll down in my own Tweetfeed, top right column, for some of my responses.

I have my doubts as to whether a lack of desire to live in Paris, TX can be extrapolated to the entire state, just for openers in rebutting the DCCC's projecting "outright disgust" onto Moser's reticence to live in one of her ancestors' homes.  I'm just supposin' here, but maybe somebody at the DCCC doesn't really know that Paris is a kind of a long way from the Seventh.  And if they think not wanting to live there is bad, then perhaps the good folks who are responsible for getting Blue Dogs elected to Congress might relocate -- just for a few months -- to Vidor, or Jasper, or one of East Texas' other garden spots.

This move was telegraphed earlier in the day in Tilove's 'First Reading' blog at the Statesman by none other than the keynote speaker for the Harris County Democratic Party's big fundraising dinner (just last week).  It was quickly followed up by this account in The Intercept about Emily's List, endorser of union-busting law firm attorney Lizzie Pannill Fletcher, launching their own broadside against Moser.  The reveal:

“Alex T(riantaphyllis) has been open about being the chosen candidate of the [Democratic Congressional Campaign Committee],” said Daniel Cohen, president of Indivisible Houston, who is not endorsing any particular candidate. (The DCCC has not officially endorsed a candidate in the primary, though its support can come in less public ways.)


Moser is hosting actress and Democratic activist Alyssa Milano this weekend for what will now be a much larger and more engaged rally than it would have been just 24 hours ago.

So with Harris County turnout already surging and media attention to the CD-07 race going national, we're headed for a rip-roaring finish to the wildest Democratic Congressional primary I can recall.

I'll be onboard for the full ride.
Posted by PDiddie at Friday, February 23, 2018

Well, I believe your header & lede hit the proverbial nail on its proverbial head. This kerfuffle has certainly raised Ms. Moser's profile a notch or two. It'll be interesting to hear her take in the wake of it.

Ooh, look who else picked up the story! Lee Fang et al in The Intercept.