Hillary Clinton, 'round the bend

Let the healing begin scab be scratched open and bleed on the carpet a bit more. 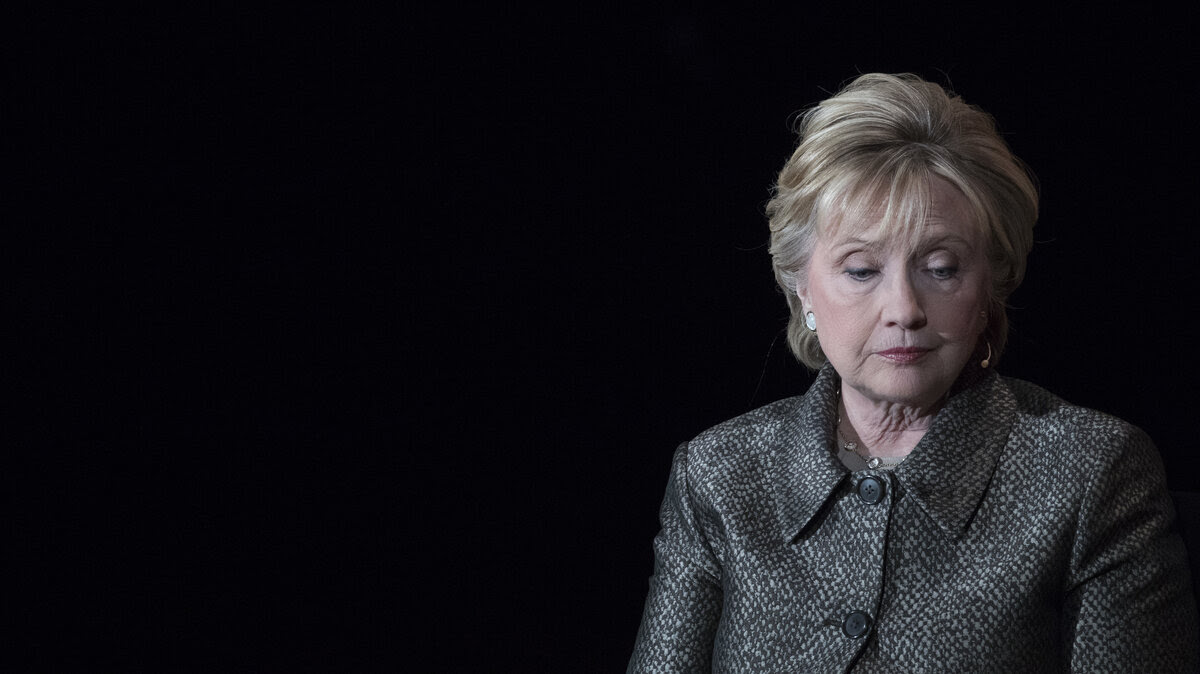 "I take responsibility for every decision I made, but that's not why I lost."

She lost, she told Recode's Kara Swisher and Walt Mossberg, because of unfair media coverage, an "unprecedented" campaign waged against her by a foreign adversary, James Comey's decision to re-open her email probe, criticism of her candidacy that she claimed bordered on misogyny, and a prevailing sentiment that she would be victorious, which hampered voter turnout.

And also the DNC, that POS -- something we can both agree on, although for a few reasons we might agree on ... and several we would not.

Clinton said that she did not inherit a strong data foundation from the Democratic party, which was "bankrupt" and near "insolvent."

I suppose if this was true, it then wouldn't be Debbie Wasserman Schultz's fault.  But it is not true, unless you would rather believe Breitbart, which posted fundraising numbers from the fall of 2015 and linked to a FEC page (you'll have to manipulate your request by year and org to compare the figues with Breitbart's claims).  There's this from 2013 and CNN and Fortune magazine, and that's the best evidence I can find that supports Clinton's assertion.  By contrast, this story from Politico last July completely contradicts Her.

Hillary Clinton’s joint fundraising committee with the Democratic National Committee raised $81.6 million over the last three months, and transferred $20.7 million of it to her campaign, according to a report filed Friday night with the Federal Election Commission.

The committee, Hillary Victory Fund, has been raising money aggressively since last year and it finished last month with $41.9 million in the bank. That’s more than double the balance maintained by the two joint fundraising committees started in late May by her presumptive GOP rival Donald Trump, who is facing a gaping financial disadvantage.

Perhaps she's accurate; the DNC may have been flat busted in late 2015, and she certainly did 'inject money' into it.  Don't all presidential candidates do that, though?  At the very least, presidential nominees augment the fundraising of the national organization.  I recall hearing lots of complaining about the DNC not helping state parties, and the article above notes her contribution to them, but there was a later Politico story reporting that both she and they did not follow through on that, and indeed sought to conceal that fact from the media.

(*ed. note: several updates have been made to the above graf.)

By contrast, she said, then-GOP candidate Donald Trump inherited a well-funded and extensively tested data operation that laid the foundation for his ultimately successful campaign to effectively weaponize data and internet content against Clinton.

"So Trump becomes the nominee and he is basically handed this tried and true, effective foundation," Clinton said.

The DNC was not bankrupt nor was it insolvent, or anything near it, at the time she became the Democratic nominee last summer.  That statement is demonstrably false.

With respect to data management infrastructure: recall that Clinton had her own (allegedly) sophisticated IT team and tool, named Ada.  So if what she said above was true ... why would Trump even need the Russians and their agents to spew out fake news on social media, conning gullible Americans into not voting for Her?

Big Data failed Clinton but not Trump?  Trump and the GOP -- specifically Steve Bannon and Cambridge Analytica, or maybe Robert Mercer -- were just smarter than Clinton and the DNC?  Okay, scratch that question.  But this one deserves an answer: does the evidence of the past six months of the Trump Administration in action enable you to believe this?

It did make Ted Cruz sick to his stomach once upon a time, for whatever that's worth.  Again, why do you need Russians when you have evil geniuses like Michal Kozinski?

A couple of things before we move on to the Russians hacking the election (sic).

"We did not engage in false content," Clinton said. "We weren't in the same category as the other side." (There have been false stories from both political stances, according to analysis from BuzzFeed News.)

And she was "the victim of an assumption she would win".

Now then, let's get our passports stamped for Moscow, via the looking glass.

Then she asked, not-quite-rhetorically, “Who were they coordinating with or colluding with?”

Unlike previous Russian cyberattacks inside the U.S., “This was different. They went public,” she said. “The Russians, in my opinion -- and based on the intel and counterintel people I’ve talked to -- they could not have known how best to weaponize that information unless they had been guided.”

“Guided by Americans,” Clinton answered. “And guided by people who had polling data and information.”

Okay then. At least we didn't get any postulates about voting machines being hacked.

After a brief tour of James Comey’s behavior during the election, Kara Swisher asked Clinton who she thought was guiding the Russians. “ I hope that we’ll get enough information to be able to answer that question,” Clinton responded at first.

“I am leaning Trump,” Clinton said.

“We’re going to, I hope, connect up a lot of the dots,” she said. “And it’s really important because when Comey did testify before being fired this last couple of weeks, he was asked, ‘Are the Russians still involved?’ And he goes, ‘Yes. They are.’ Why wouldn’t they be? It worked for them. It is important for Americans, particularly people in tech and business, to understand Putin wants to bring us down and he is an old KGB agent.”

I'm sorry to say it, but both the Democrats and the Republicans nominated candidates who were far too emotionally unstable to serve as President of the United States.  I still believe the worst one won, but it's a real close call.

Of course, Clinton believes she beat Trump. And Bernie Sanders, too.

I'll still stand on James Comey being a blithering idiot, voter suppression in states like Wisconsin, and Clinton being the absolute worst candidate imaginable in a 'change' election cycle, and that was before her rumored health issues were unfortunately confirmed, and a host of other Al Gore-like small mistakes that added up to her pulling defeat from the jaws of victory.  Errors in polling, the coup de grâce, gave everybody a false sense of security that she would hang on.  I went back and forth about her prospects myself at the end of September, and again in early November.  But even Trump himself was musing about 'taking a nice, long vacation' after Election Day.

That was in August, though.  Conspiracists alight!
Posted by PDiddie at Thursday, June 01, 2017

You were too kind.

Yes, that's always been my downfall; I'm just too fucking nice to everybody.

Ahh, I'm pretty sure that's not totally true. Want me to ask Ted? ;) Or, better yet, Noah? Or Trey, either sober or drunk?

Of course, I meant too nice compared to my steaming hot take.