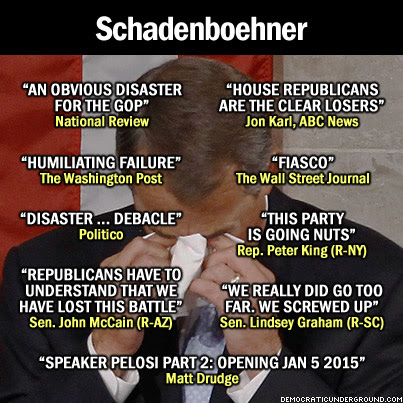 Your linkage for the above:

"An obvious disaster for the GOP"

"House Republicans are the clear losers"

"This party is going nuts"

"Republicans have to understand that we have lost this battle"

"We really did go too far. We screwed up"

More surrender roundup here if you need it, want it, like it, have to have it.  A few more developments from late last night worth mentioning....

No Texas Republican votes to reopen US government or avoid default

Then there's the actual satire.

Cruz: "The Dream of keeping poor people from seeing a doctor must never die"

His eyes welling up with tears, Sen. Cruz said, “I embarked on this crusade with a simple goal: to keep affordable health care out of the reach of ordinary, hard-working Americans. And while this battle was lost, that dream—that precious, cherished dream—will live on.”

Reflecting on the government shutdown and near-default that almost touched off a global financial apocalypse, Sen. Cruz said, “We’ll give it another try in a few weeks.”

“Unfortunately, once again, the wrong side won,” he said.

Over in the House of Representatives, Speaker John Boehner (R-Ohio) congratulated his colleagues on the deal to resolve the shutdown, telling reporters, “This proves that when we work together, we can come up with a totally unsatisfactory solution to a completely unnecessary crisis.”


With fail this epic, it's hilarious (or maybe just pathetic) to find there are Teabaggers this morning -- sober, I must presume -- who still think they are winners.  And still support the Speaker, even as they voted 'no' in perfect lockstep last night.

I have to say that this madness among conservatives leaves me astounded.  They're already talking about shutting it down again in a few months.

Is it possible that the Democrats could screw up such a gold-plated gift?  I suppose so, but on the morning after this capitulation by the seditionists in the House of Representatives, it certainly smells like their goose is cooked.  Burned to a crisp, even.

I'd rather see them snapped back to reality in a little over year, and not much sooner than that.
Posted by PDiddie at Thursday, October 17, 2013

OTOH, this deal was NOT totally "clean." (Unless you like take-out from the Catfood Commission.) http://socraticgadfly.blogspot.com/2013/10/debt-deal-revitalizes-catfood.html