The New York Daily News for the win. 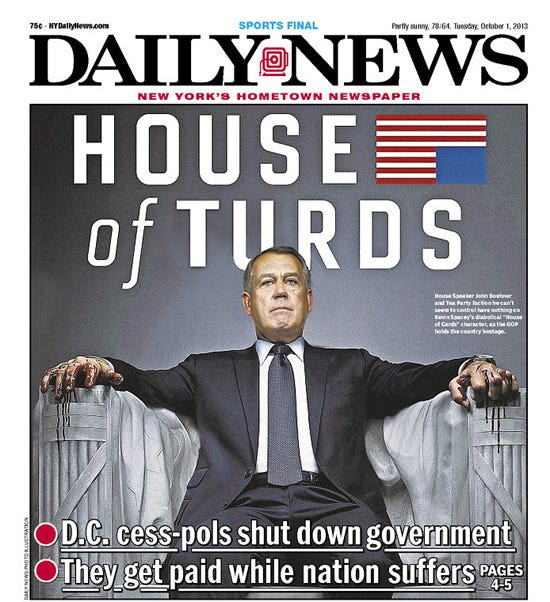 As soon as the markets start dropping, Jamie Dimon will call Boehner and tell him to cut the crap. But I don't expect that to happen before the end of the week.  In the meantime, the cost is harsh for some (and it's not a political one, either).

Federal employees who are considered essential will continue working. Those deemed non-essential -- more than 800,000 -- will be furloughed, unsure when they'll be able to work or get paid again. Most furloughed federal workers are supposed to be out of their offices within four hours of the start of business Tuesday.

The shutdown could cost the still-struggling U.S. economy about $1 billion a week in pay lost by furloughed federal workers. And that's only the tip of the iceberg.

While many agencies have reserve funds and contingency plans that would give them some short-term leeway, the economic loss would snowball as the shutdown continued.

The total economic impact is likely to be at least 10 times greater than the simple calculation of lost wages of federal workers, said Brian Kessler, economist with Moody's Analytics. His firm estimates that a three- to four-week shutdown would cost the economy about $55 billion.


Eight hundred thousand people is roughly the size of San Francisco (which by itself provides incentive in the TeaBagger mind).  Locally, NASA is all but closed today. But the troops, Medicare and Social Security recipients, and yes, members of the House and Senate still get their paychecks.

And Obamacare is gearing up right on schedule.  It's obviously more popular than Ted Cruz says.

So the next time the Democrats have the House of Representatives and a Republican is in the White House (maybe never again in my lifetime for the latter), let's see the House shut down the government over going to war.  Or rolling back the Bush tax cuts.  Hell, since this is a dream, a tax increase on the wealthiest 1%.

Makes sense in this world turned upside down, doesn't it?
Posted by PDiddie at Tuesday, October 01, 2013