The messiest democracy ever

Last night's debate among six of the contenders for Houston mayor was, in a word, brutal. Two of the most excruciating hours of the city of Houston's existence (including yours, mine, and ours). And that is not hyperbole.

My experience of last night's mayoral debate was to a) tune to Channel 8, and b) follow the Tweet stream of the hashtag #HouNews, switching over to #HouVote when that became the category of preference. I also began making notes as the questions began, but abandoned that within the first ten minutes and just let it all wash over me.

For the uninitiated: Following Twitter is analagous to drinking water out of a firehouse... except sometimes the hose turns into Niagara Falls, and you're at the bottom with the rocks and the broken pieces of barrel and dead fish.   It is difficult to endure the unemployed comedians, actual snark artists, and misspelled rants in order to find the occasional kernel of cogent observation during a live event at which you are not present.  It's all but impossible to process when six candidates, four questioners, and one moderator are talking in order while sixteen observers -- some of your friends, some acquaintances, some random strangers, and a couple of fringe freaks from the opposite side of the political spectrum as you -- are all talking on your digital screen, all at once.  But that's why I'm here: to make the sense of the nonsensical.

Except in this case, I can't.  And that's not Twitter's fault.

I began this election cycle as a fierce advocate for those candidates who won't get another chance to put themselves before the voters and present their ideas in a public forum (that more than fifty Houstonians will get off their couches and participate in).  After last night, it is obvious that in addition to the three or four candidates who could not be bothered to show up for the debate, there were some who simply should not have been allowed to enter the building.

And one of them was most certainly Eric Dick, the candidate currently leading the Houston Chronicle's online preference poll.

I'm not going to spare you any more agony.  You have to experience it for yourself.  Queue up the debate on video when the League of Women Voters or KUHT posts it in the coming days, then search Twitter for the hashtag #houvote and scroll down (backwards in time) to around 7 p.m on October 8, and then watch and read in chronological order, like I did, until the two hours is up... or you can't take any more.  Or you can just read this.

Houston Mayor Annise Parker defended her initiatives and deflected a bevy of criticisms from her challengers on the state of the city's roads, finances and public transportation on Tuesday night in the first and only televised debate of this year's mayoral contest.

Parker, vying for a third term, joined her top challenger Ben Hall and four lesser known and funded competitors for the two-hour forum-style debate aired on KUHT (Channel 8) and hosted by the League of Women Voters. Candidates answered dozens of questions about topics including crime, transportation, economic development and quality of life.

Candidates Eric Dick, Don Cook and Michael Fitzsimmons managed to "land some points" on some important issues that may chip away at Parker's substantial lead, said University of Houston political scientist Brandon Rottinghaus, but she is still the likely victor this fall.

Early voting in the Nov. 5 election begins in less than two weeks.

"Several of them I think took her to task on questions about Metro and fixing the streets, and I think that's something that Houstonians broadly could probably empathize with," Rottinghaus said. "But with that said, none of these criticisms really rose to the level of being a truly damaging issue for her."


My scorecard likewise had Parker winning because she made no mistakes (except for her seemingly ever-present contemptuous body language), and Keryl Douglas for being the most prepared among the challengers.  It's already the Year of the Woman, fellas.  Get your shit together.

Update: Besides those photos at the Chron, this one with the mayor, her chief strategist Sue Davis, and campaign manager Stuart Rosenberg celebrating her win with fried chicken from Frenchy's is something of an instant classic. 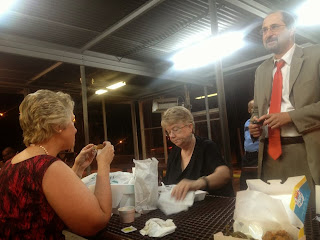 I doubt that a faceoff between Hall and Parker would have been -- make that "will be", since it's going to happen -- much more tolerable than last night's event.  Hall spending all his time blasting Parker while advocating ridiculous crap like Batcaves under the city filled with drinking water; Parker nonchalantly defending herself as casually as she swats flies while sitting on the porch.  See?  My blog post for that is already written.

For the future, let's consider a series of these in a format where three candidates are drawn at random, or even with the two leading candidates and one other, to "debate" for thirty minutes and then rotate in the others over two hours, or one hour over multiple evenings.  Maybe that would produce a more coherent policy discussion.

You just have to hold out some hope for something better than this.
Posted by PDiddie at Wednesday, October 09, 2013

I think the "fringe freaks from the opposite side of the political spectrum" are choking on Dick. They have little to be proud of.

Perry - thank you for your very accurate and fair assessment of last night's debate. I concur with the majority of your conclusions and appreciate your efforts in letting folk know the straight skinny. Much appreciated.......NOW...FOLKS! Let's get serious about this. The HOuston CHronicle is running a poll asking who won the Mayoral debate last night and as of now Eric Dick is a run a way winner.
Take the time and go to this link and cast an intelligent vote. I don't care who you vote for, just vote intelligently and let's not be a laughingstock.

The real news in this "poll", Unk, isn't that Eric Dick is leading -- we all know that half the people clicking his name didn't watch the debate and aren't eligible to vote in the mayor's race anyway because they don't live in Houston -- but that 15 people cast a vote for a "winner" WHO DID NOT SHOW UP FOR THE DEBATE.

Chreyl Drab was nowhere near that stage last night.