The Texas freshman senator and his senior aides are unleashing a barrage of attacks on their fellow Republicans for refusing to support their plan to choke off Obamacare as a condition for funding the government. Cruz’s chief of staff is lambasting fellow conservatives like Oklahoma’s Tom Coburn for serving in the “surrender caucus.” His top political strategist has compared Mitch McConnell to Barack Obama. And the senator himself has said many Republicans are “scared” to wage this fight.


Too conservative, reactionary, and obnoxious for Tom Coburn. There just isn't enough popcorn in all of Orville Redenbacher's warehouses for summer entertainment this bloody. 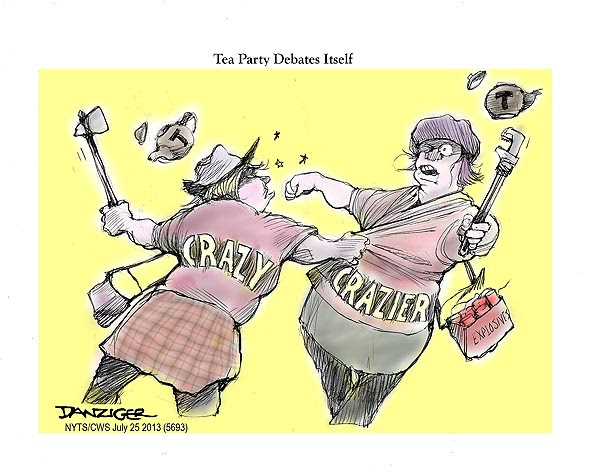 The essence of the clash is this: Cruz can’t comprehend why his GOP colleagues don’t welcome the fight, while more senior Republicans think the junior Texan simply doesn’t understand — or care — about the dire political consequences for their party of a government shutdown. Plus, Cruz’s critics think the plan to repeal Obamacare is destined to fail.

But worries about a shutdown are falling on deaf ears.

“There is a powerful, defeatist approach among Republicans in Washington,” Cruz told conservative radio host Dana Loesch earlier this week. “I think they’re beaten down and they’re convinced that we can’t give a fight, and they’re terrified.”


This is the stuff legends are made of. Most of those legendary figures, if history serves, came to ignominious ends (here I'm thinking of Cruz's idols Joe McCarthy and Benito Mussolini).

Cruz’s uncompromising style has won him legions of fans on the right — a fight that started earlier this year when he battled Chuck Hagel’s nomination as defense secretary, continued when he helped block House-Senate budget negotiations because of concerns over a debt ceiling hike, and intensified when he fought with Rubio and GOP senators over a bipartisan immigration bill.

A former top Senate GOP leadership aide, who asked for anonymity, said Cruz’s latest battle “isn’t about principle and it isn’t about party.”

“It’s about promoting Ted Cruz’s presidential ambitions, and he and his team are making clear that retaining the House or winning back a Senate GOP majority are all secondary to that goal,” the source said. “It’s a shortsighted and selfish political strategy but one that fellow Republicans are unfortunately having to get used to.”

“The Republican infighting is hurting our brand,” said one Senate Republican aide, who fretted that Cruz’s divisive tack would alienate voters and hurt GOP efforts to retake the Senate.


2016 is a free shot for Carnival Cruz; his eye is actually on the 2020 prize. I think he's really enjoying tearing down the GOP, to be rebuilt in his own image. Not even he thinks he can get that done in a year or two.

But this is also a #TCOT geek fight.

Privately, a number of senior GOP aides are miffed at what they see as personal jabs launched on Twitter by senior Cruz aides, including the senator’s chief of staff, Chip Roy, a former aide to John Cornyn, a Texas senator who took his name off the Lee letter last week. Those aides were unapologetic Tuesday for their public criticisms.

Roy sarcastically quipped on Twitter that it is “shocking” that Sen. John McCain (R-Ariz.) opposes the hardball Obamacare funding tactics given that McCain is “someone talking to [Sen. Chuck] Schumer 5x a day and the White House daily.”

Coburn told The Washington Examiner, “The worst thing is being dishonest with your base about what you can accomplish, ginning everybody up and then creating disappointment."

“Since when is a promise to fight disastrous policy ‘dishonest?’” Roy tweeted in response: “No, the worst thing is giving up & leaving your base believing there is no need to be a Republican any longer.”


Deeper inside that baseball at the link, if that sort of thing floats your boat. This sure is a lot more fun than listening to Big Jolly whine about Jared Woodfill and the Harris County GOP, isn't it?

Clue to Dave: Woodfill is the least of the Republican party's problems.

Update: More on "Poop" Cruz from the Great Orange Satan. And here's a helpful bubble map of all the conservative infighting.

Update II: You'll notice I made no mention in this post to the other major battle front in this war.
Posted by PDiddie at Wednesday, July 31, 2013

I find it somewhat astounding, to say the least...... that even in Texas.... these pols want to go to their constituents and say..... "you know what?.... you don't need... to have health care.... especially not health care you might be able to afford." Let's do away with that.