All talk but no action 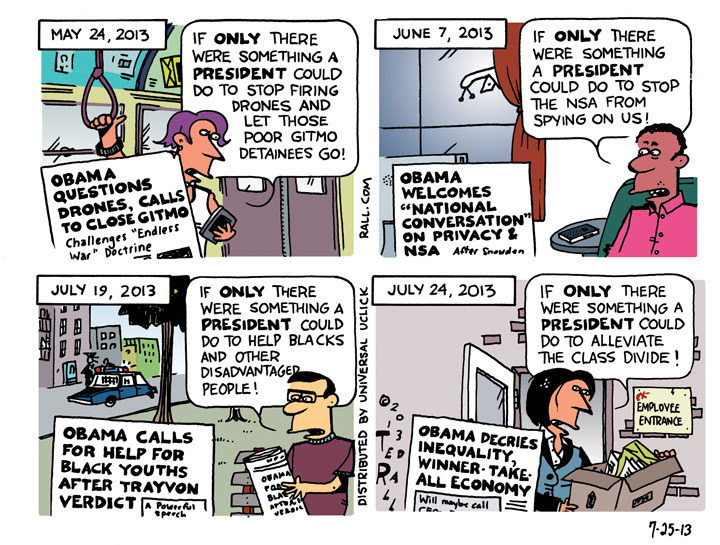 Blaming Congressional obstruction does not explain why universal single-payer healthcare was never on the table in 2009. And it does not adequately excuse the reason that the public option came off the table very early on in the negotiations of the Affordable Care Act. That's when I first realized we had a problem.

The President of the United States could have fought for these things while he had Democratic majorities in the Congress. He did not. If there were recalcitrant Democrats afraid to vote for true healthcare reform -- and not just healthcare insurance reform -- a president who wanted to see it passed would have twisted some arms, spent some political capital.

The President of the United States could have, by his own campaign promise, closed the detention center at Guantanamo by executive order years ago. He could still do so today. Or tomorrow. But those and other progressive initiatives did not happen, and in the 2010 mid-term elections the Democrats took a "shellacking".

The fact is that Barack Obama does not even wield the bully pulpit all that well any longer, and it's because he would rather give speeches than fight for something. Truth to tell, I first publicly observed his lack of strength during the debates with John McCain in 2008. He simply would not punch back when McCain slammed him. The man just doesn't have it in him.

No fight. Not, at least, for anything that the 1% or the authoritarian state doesn't want. Larry Summers for Fed chairman?! Really?!

I suppose someone will call Ted Rall a traitor or a high school dropout  because he criticized the president before too long. The fact that Obama's words are so often empty makes me feel less concerned about this.

More from Paul Krugman and Eye on Williamson.

You may recall that some of us have been saying for at least 6 or 7 years that the man had neither the experience nor the temperament to hold the presidency. Are you ready to admit we are right yet?

That's how long I have been saying it (do the math; it's right there in the post). Are you ready to admit I was right?

I publicly supported and voted for Jill Stein in 2012; you can verify that in the archives here as well.

A better question that Republicans should be asking themselves is the same one Democrats were asking in 2000 and 2004: "How can we be losing to this guy?"