A master's degree in Creation Science

When it comes to the Texas Education Agency, you CAN make this shit up (and, sadly, it will be accurate):

The "Institute for Creation Research". Their library and archives consist of one book.

The state’s commissioner of higher education, Raymund A. Paredes, said late Monday that he was aware of the institute’s opposition to evolution but was withholding judgment until the Texas Higher Education Coordinating Board meets Jan. 24 to rule on the recommendation, made last Friday, by the board’s certification advisory council.

Henry Morris III, the chief executive of the Institute for Creation Research, said Tuesday that the proposed curriculum, taught in California, used faculty and textbooks “from all the top schools” along with, he said, the “value added” of challenges to standard teachings of evolution.

“Where the difference is, we provide both sides of the story,” Mr. Morris said. On its Web site, the institute declares, “All things in the universe were created and made by God in the six literal days of the creation week” and says it “equips believers with evidences of the Bible’s accuracy and authority through scientific research, educational programs, and media presentations, all conducted within a thoroughly biblical framework.”

It also says “the harmful consequences of evolutionary thinking on families and society (abortion, promiscuity, drug abuse, homosexuality and many others) are evident all around us.”

"Both sides of the story". Aha. Fair and balanced. Note that the critical thinking comes in when they survey the evidence "all around us". Wait, it gets better:

Asked how the institute could educate students to teach science, Dr. Paredes, who holds a doctorate in American civilization from the University of Texas and served 10 years as vice chancellor for academic development at the University of California, said, “I don’t know. I’m not a scientist.”

He said he had no ready explanation for the panel’s recommendation. “I asked about the decision,” Dr. Paredes said Monday in a phone interview from Austin. “I got a three-inch-thick folder an hour ago. We’re going to give it a full review.” But, he said, “If it’s approved, we’ll make sure it’s of high quality.”

Approval would allow the institute, which moved to Dallas this year from near San Diego, to offer the online graduate program almost immediately while seeking accreditation from national academic authorities like the Southern Association of Schools and Colleges within two years.

This comes, as you may recall, on the heels of this:

The action comes weeks after the Texas Education Agency’s director of science, Christine Castillo Comer, lost her job after superiors accused her of displaying bias against creationism and failing to be “neutral” over the teaching of evolution. ...

Last month, in a sign that Texas was being drawn deeper into creationism controversy, Ms. Comer, 57, was put under pressure to resign as science director after forwarding an e-mail message about a talk by a creationism critic, Barbara Forrest, a professor at Southeastern Louisiana State University.

Lizzette Reynolds, a deputy commissioner who called for Ms. Comer’s dismissal, later told The Austin American-Statesman she was surprised she resigned. Ms. Reynolds did not respond to a message left at her office.

The Texas Education commissioner, Robert Scott, told The Dallas Morning News that Ms. Comer was not forced out over the message, adding, “You can be in favor of science without bashing people’s faith.” He did not return phone calls to his office.

Ms. Comer said the commissioner should show her where she was bashing anyone’s faith. “He just doesn’t get it,” she said.

Res ipsa loquitur. And rather than add any editorial comment to the news above, let me simply say that I believe it's time Texas had a post-baccalaureate degree program in Pastafarianism. Who's with me? 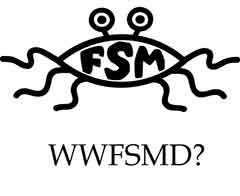