It ain't over, though, until it gets to the 5th Circuit -- or the Supremes, and there's really no reason to celebrate.  First, today's developments and then the analysis.

Attorney General Greg Abbott has filed an appeal to Monday’s ruling striking down a key provision of Texas’s new abortion law, according to a new court filing in the case.

U.S. District Judge Lee Yeakel ruled Monday that a provision to require abortion providers to have admitting privileges at nearby hospitals is unconstitutional.

Yeakel also partially blocked new restrictions on pregnancy-ending drugs, saying they “may not be enforced against any physician who determines, in appropriate medical judgment, to perform a medication-abortion using the off-label protocol for the preservation of the life or health of the mother.” New regulations for abortion-inducing drugs are set to kick in at midnight, except in cases when women have medical conditions that can make surgical abortion “extremely difficult or impossible,” according to the ruling.

Abbott filed the appeal about an hour after the ruling was made public Monday afternoon.

That he had it all ready to go tells you everything.

"The court upheld part of the law and enjoined part of the law," Abbott spokesman Lauren Bean said in a statement. "The State has already appealed the court’s ruling. We appreciate the trial court’s attention in this matter. As everyone – including the trial court judge – has acknowledged, this is a matter that will ultimately be resolved by the appellate courts or the U.S. Supreme Court."

Thanks, Captain Obvious Bean.  Now to the judge, GW Bush appointee Yeakel.  The excerpt below is from the second link at the top.

An equally important section of Yeakel’s opinion, however, offers less welcome news for women seeking abortions. In brief, the Food and Drug Administration approved a particular method of terminating a pregnancy via medication in 2000. Since then, doctors developed an alternative method that is endorsed by the American College of Obstetricians and Gynecologists (ACOG), but has not yet been approved by the FDA. This alternative method requires lower doses than the FDA-approved method, and it also enables the woman to make fewer visits to the doctor’s office. Notably, because one of the drugs used in medical abortions “triggers almost immediate bleeding and cramping,” the alternative method allows women to administer the drugs at home — rather than have to undergo the uncomfort caused by the drugs in an unfamiliar clinical setting.

Texas’ law permits doctors to prescribe the reduced doses used by the alternative method, but Yeakel reads the Texas law to “not allow the physician to follow the administration or route portions of the off-label protocol.” Among other things, this forces women into a cold clinical setting while they are enduring the effects of the abortion drugs.

Judge Yeakel, however, finds nothing constitutionally wrong with Texas forcing women to endure such unnecessary hardship in order to obtain an abortion. Quoting the Supreme Court’s decision in Planned Parenthood v. Casey, Yeakel holds that “the incidental effect of making it more difficult or more expensive to procure an abortion cannot be enough to invalidate” the Texas law. When “reasonable alternative procedure[s]” are available, a state’s decision to ban one particular procedure is not unconstitutional, even if that is the least painful, least time-consuming or least demeaning procedure available to the woman. “Individuals do not have a constitutional right to a preferred medical option, so long as a safe, medically accepted, and actual alternative exists.”

So the upshot of Yeakel’s opinion is that Texas cannot ban abortion. Nor can they create entire swaths of their state where abortions are nearly impossible to obtain. But they can effectively punish women by making them endure unnecessary pain, hardship or invasiveness before they can exercise their right to choose. Should Yeakel’s decision stand, it is practically an invitation for lawmakers to impose needless pain on women seeking abortions.

This law is traveling a path to the SCOTUS, where they may strike down some of the freedoms granted in Roe v. Wade forty years ago.  That's what conservatives have been praying for all along.

But there's a long way to go before this legislation meets its fate and makes its history.  In the meantime, Texas voters -- along with those in the other states who suffer under Republican state governance -- can get started turning back the tide by voting out these goddamned Austin Republican misogynists in 2014.

(T)he Democrats must also begin to overcome GOP dominance of the state legislatures. 2020 is the crucial date. If the Democrats fail to retake a substantial number of these state chambers by then, the Republicans will be able to continue the 2011 gerrymandering in 2021. We can likely expect far more state conservative legislation against voting rights, reproductive rights, unions and more. Given the Tea Party's influence within the GOP and its many billionaire backers, gridlock could also continue in Congress — even if the Democrats win every presidential election or the Senate for years to come. 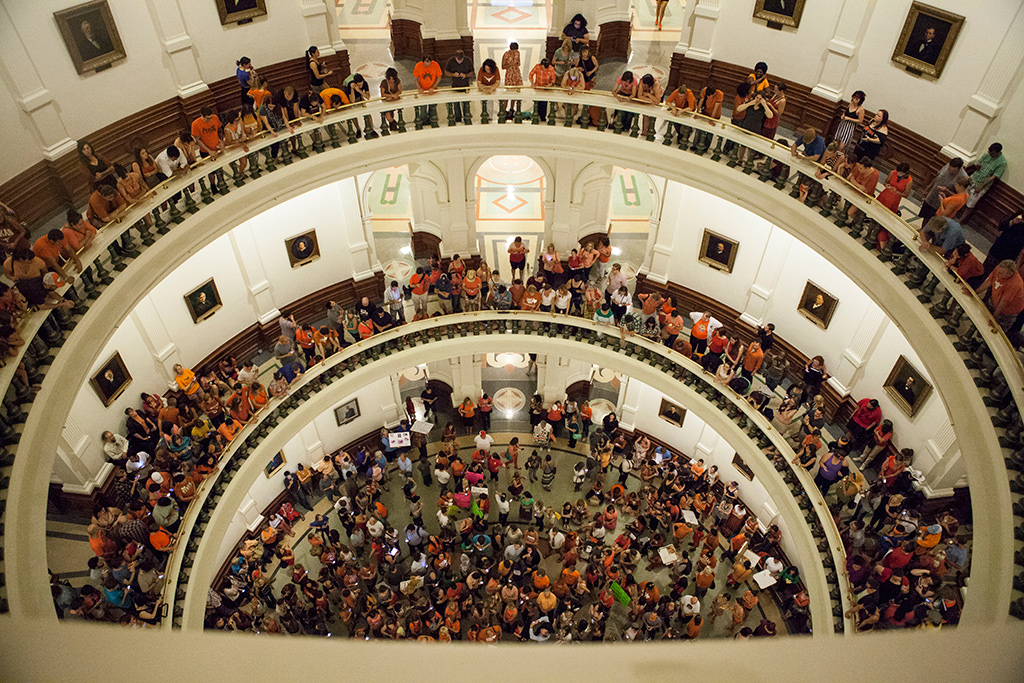 And it's going take a lot more people than this to get it done.

Update: Dahlia Lithwick, the country's pre-eminent Supreme Court observer IMO, points out that the ruling gives a victory to pro-choicers and a even minor one to pro-lifers, but settles nothing.  And disregard completely the spin of political consultants like these -- and the media that consults them, and the word-parsing that precedes and follows -- which is emanating like gas from a swamp.

In its 20-page ruling, the appeals court panel acknowledged that the provision "may increase the cost of accessing an abortion provider and decrease the number of physicians available to perform abortions." However, the panel said that the U.S. Supreme Court has held that having "the incidental effect of making it more difficult or more expensive to procure an abortion cannot be enough to invalidate" a law that serves a valid purpose, "one not designed to strike at the right itself."