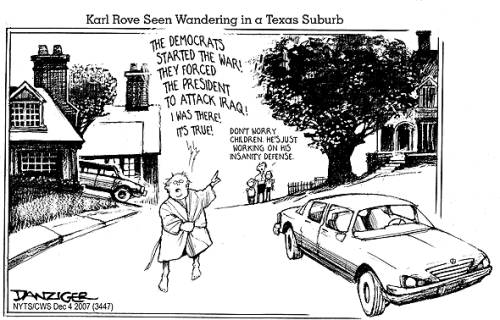 When The Architect of a misadventure in Iraq deep into the trillions of dollars with still no end in sight calls anyone a "big spender", maybe it's time for the attendees to put on the waders. They put on their kneepads instead:

"Every time ... I see Karl, I bow just a little bit and call him 'his excellency,' " said Dewhurst.

"Karl was neither the man behind the curtain in as many things as he got credit for, nor is he to blame for all the things in the last couple of years he's been blamed for. He's a hard-working, smart political strategist. I would imagine he's so busy rewriting history these days that he may not have time to make any history with new candidates."

-- Democratic consultant Kelly Fero, getting it right for once