The Texas Progressive Alliance marks some of our Republican leaders' more egregious conduct in this week's roundup of the best blog posts, Tweets, and news from around and about our Great State.


Texas’ inn for refugees is full, Gov. Greg Abbott says, declining to admit any more. He cites illegal immigration, exhaustion of the resources of the state and its nonprofits -- not lack of vetting of refugees, as he did in 2015. #txlege #immigration https://t.co/7Len3LGCFf
— Bob Garrett (@RobertTGarrett) January 10, 2020


Our lazy-eyed indicted attorney general is busy getting government off our backs.


Planned Parenthood will likely be excluded from state employees’ annual drive to raise money for charity, the result of a new state law that prohibits governments from doing business with abortion providers or their affiliates. https://t.co/yhceMqRsRS
— Texas Tribune (@TexasTribune) January 10, 2020


From the Strange Bedfellows Department, Karl Rove shares the same concerns (with Dennis Bonnen) of Donald Trump that Barack Obama has of Joe Biden's campaign.


But Trump has bigger crawfish to boil than Rove; he doesn't want to be eclipsed by his junior partners in Austin.  Failing (for now) in starting WWIII with Iran, he's going on the attack against our air and water, via the EPA.


Texas is home to one of the largest uranium deposits in the country—but mining those deposits poses severe pollution risks. Any new mines would be subject to a longstanding environmental safeguard.


So we need to elect some environmental guardians in 2020.  Steve Taylor of the Rio Grande Guardian covered the Democrat running for Railroad Commissioner who visited the Rio Grande Valley this past weekend.

Asked about her top campaign issues, Castañeda spoke mostly about the need to eliminate the flaring of natural gas in Texas oilfields.

“We have had laws on the books for 100 years that prevent the waste of our natural gas, which, currently, the oil companies are lighting on fire. The oil is produced along with natural gas and they flare the natural gas rather than take it to market,” Castañeda said.

“If we turned that natural gas into electricity, it would be enough to power the city of Houston. There is so much waste going on. ... My opponent will not enforce that (100-year old) law because the oil companies find it too costly to follow the law. I will enforce the law.”


In Democratic presidential candidate developments, New York billionaire Michael Bloomberg spent last weekend on a bus tour of Texas.  He met with supporters in San Antonio and Austin, kicking off on Saturday in Dallas, where he campaigned with television's Judge Judy.  The Houston Chronicle reported former mayor Pete Buttigieg made a three-day trip to the Lone Star State last week; he hosted two Dallas fundraisers and a private meeting with local Democrats at Paul Quinn College.  And Joe Biden will attend an event this week in Dallas, along with a fundraiser hosted by former mayor Mike Rawlings.

But some Democrats don't think this is enough.

"We had a moment where it felt like Texas was important to everybody, and then it slid to the back burner," said Harris County Democratic Party Chairwoman Lillie Schechter, reflecting a sentiment several other Texas Democrats shared with The Texas Tribune.

The fear is that a few weeks of television advertising and a few pit stops in the state as candidates blitz the rest of the South are not sustaining investments toward making Texas a battleground state and making progress down-ballot, like winning the state House of Representatives.


PDiddie at Brains and Eggs posted a two-part weekly Dem prez update focused on tomorrow's debate and the re-ordering of the leaders due to Bernie's surge and Biden, Warren, and Buttigieg's foundering, as well as the usual snark.  There will be an update on Tuesday about the debate and the latest on the Warren/Sanders 'she said/he said' bullshit.

There was a Texas Senate candidate forum in Houston over the weekend, and the candidates blasted both Greg Abbott and John Cornyn. 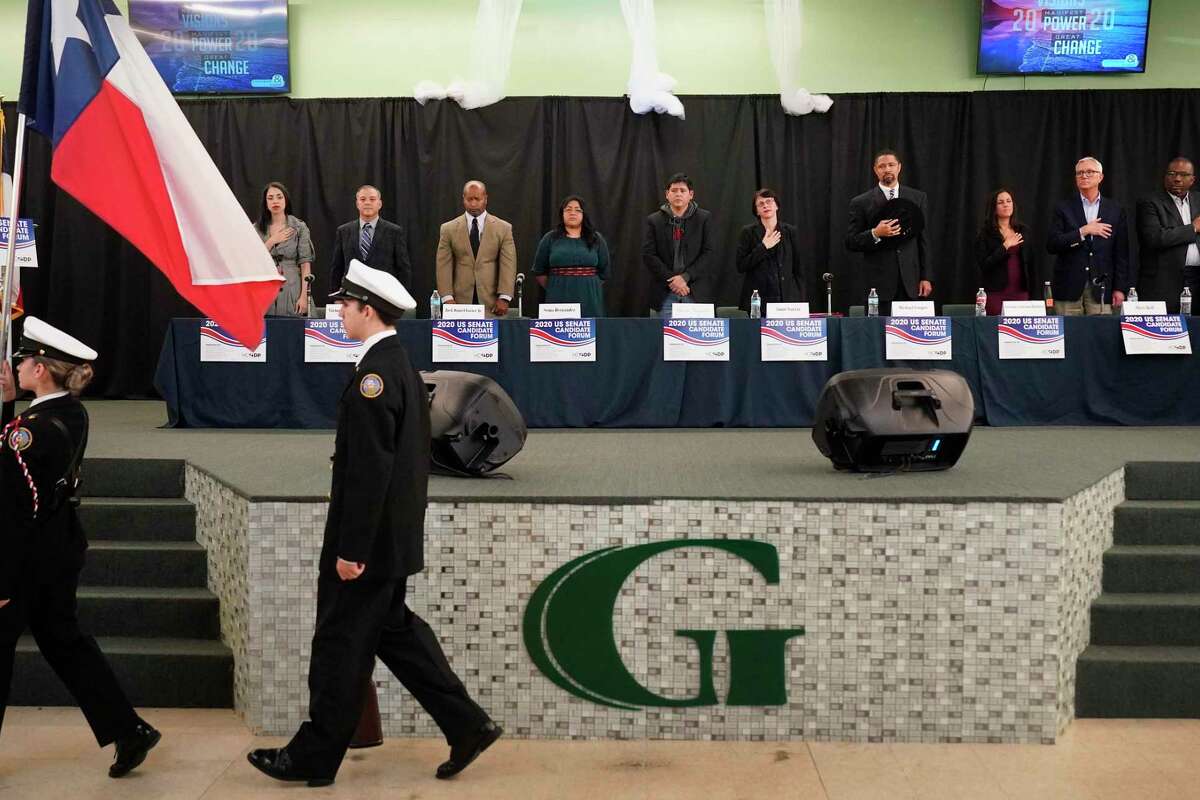 Grassroots activist Sema Hernandez of Pasadena, who finished second to then-U.S. Rep. Beto O’Rourke in the 2018 Democratic primary for U.S. Senate, said Abbott’s refusal to accept additional refugees was particularly unseemly because so many of those refugees were, she said, a direct result of U.S. military and economic policies.

“This is the damage we have inflicted in over four decades, 40 years, of neoliberal policies,” Hernandez said.

.@SenatorLucio's time in office is up, and the #RGV is ready for progressive leadership that represents the needs of the people! #txlege https://t.co/N42gsysIVh
— Progress Texas (@ProgressTX) January 10, 2020

Our Crib Sheets have been updated with the Green Party’s candidate slate. They now include the 347 Republicans, 328 Democrats, 90 Libertarians, 14 Greens and 44 independents who have filed for the state’s federal, statewide and legislative offices on the ballot in 2020. Any candidate who did not file by the December 9 deadline may still seek to become a certified write-in candidate. Otherwise, the fields for 2020 are set.


Transitioning from electoral politics to some of the social and legislative matters that impact our beloved Deep-In-The-Hearta ...


"While other states are putting millions of dollars toward similar efforts, Texas leaders have set aside no money to facilitate the count." A really important story by @alexazura https://t.co/cclRA4elO4
— Juan Pablo Garnham (@jpgarnham) January 10, 2020


Grits for Breakfast has doubts about a proposed judicial appointment system.  Amber Briggle at Love to the Max documents how to pass an equality ordinance.


This picture, found in a health textbook, depicted a woman with a briefcase. It did not sit well with far-right board members, who demanded the picture be replaced with another showing a woman putting a cake in an oven. pic.twitter.com/PbwISHKRvn
— Texas Freedom Network (@TFN) January 12, 2020


SocraticGadfly looked at the New York Times' 1619 Project, trying to claim that year, not 1776, is the keystone to US history, and says BOTH it AND its major opponents are all wet.

Rogelio Sáenz at the Rivard Report notes that children of color are already the majority in many US states.  The Bloggess presents her TED talk.  And some just wanted to blog about weed.

But a legislative accident paved the way for an experiment in marijuana decriminalization in the state.https://t.co/nDFbXG3Qdx
— Texas Observer (@TexasObserver) January 12, 2020


As Fort Worth gets ready for their Stock Show and Rodeo, Bud Kennedy at the FWST brags that the attendees will find a revitalized Cowtown, aimed at the '21st century cowboy'.

Every time an oil and gas boom gets underway, it’s followed by a boom in another industry: sex work.