With a host of developments surrounding the White House incumbent this past week -- the most recent being that Speaker Pelosi has at last decided to send the articles of impeachment to the Senate -- I'll forgo extended mention of the warring, lying, megalomanic for now. 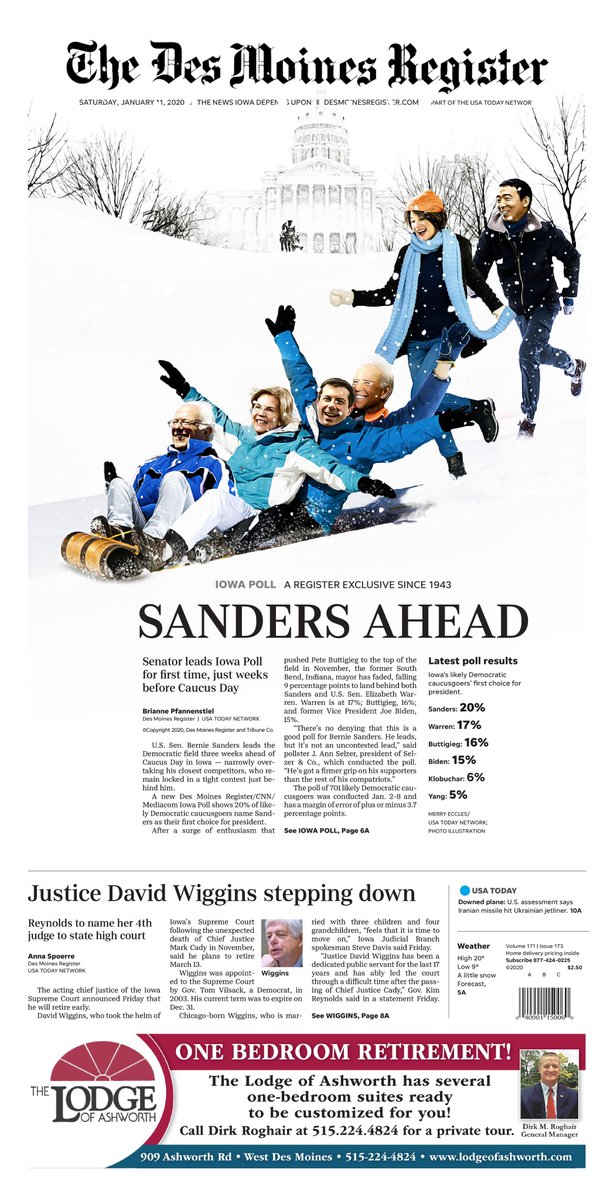 
U.S. Sen. @BernieSanders leads in the latest DMR/CNN/Mediacom Iowa Poll, and does so at about the best time for such a peak: https://t.co/Mvc9XIJVRL
— Nick Coltrain (@NColtrain) January 10, 2020

Bernie Sanders is surging in the 2020 Democratic presidential primary polls, and, as CNN analyst Harry Enten wrote Sunday, “It’s becoming more apparent” that the Vermont senator and former Vice President Joe Biden “are the candidates to beat.” Sanders, according to Enten, has an extra advantage: “Biden’s fundraising is not anywhere near as strong as Sanders’.” As a recent Politico story observed, Sanders’ campaign is “being taken seriously” among Democratic party insiders.

Sanders’ ascension is scaring acolytes of former President Barack Obama, but according to a new story from the Daily Beast, they can’t figure out a way to stop him.

“As Sanders gained new flashes of traction in recent weeks,” the Daily Beast reports, “the former president’s lack of official guidance to halt his momentum, and the scattering of his inner circle to rival campaigns, have hampered any meaningful #NeverBernie movement.”

BREAKING: Sanders wins another important endorsement. Why is it important? Because Sunrise has its own fundraising apparatus, and they are highly organized on the ground. https://t.co/K9FzDWEg4D
— 𝕁𝕒𝕔𝕠𝕓 𝔽𝕝𝕠𝕨𝕖𝕣𝕤 🕊🌹🌱🏳️‍🌈 (@jacobflowers) January 9, 2020

“I think it’s Bernie Sanders becoming more believed in as a real force, and we have to start taking him more seriously,” Gundlach said. “If people get more worried about Bernie Sanders and they start to price in his spending programs, then you could really start to see trouble in both [long-term Treasury] bonds and stocks, which could really be on a rough ride.”

“Bernie is extremely genuine. He’s consistent. He’s powerful, not because of who he is as one person, but because of the way he invigorates people and excites them, and brings together this movement.” -@emrata pic.twitter.com/ZTD8jjHHCI
— Bernie Sanders (@BernieSanders) January 9, 2020


In response to Larry David's complaint the previous night on Colbert, regarding a Bernie Sanders victory in November ...


So there's all of that, a splendid week for Tio Bernard.

Uncle Joe?  Not so much.


Try to keep in mind that facts are not attacks.

Sanders is a longtime antiwar advocate who voted not to authorize the use of force in Iraq. He’s staked out distinct positions on foreign policy, including America’s relationship with Israel and its role in the Middle East. Biden represents the establishment wing of the party’s views. He chaired the Senate Foreign Relations Committee for years, voted for the Iraq War, and is running on a platform of a return to normalcy.

“Joe Biden voted and helped lead the effort for the war in Iraq, the most dangerous foreign policy blunder in the modern history of this country,” Sanders said in an interview with CNN’s Anderson Cooper Monday night.

Sanders co-introduced a bill late last week to block funding for any military action in Iran and put out a video saying he’s “not sorry” for his long history of opposing US wars.

An Iowa voter told Biden Friday that he‘s with him “90%” but is concerned about Biden having supported the Iraq War.

In response, Biden suggested, yet again, that he opposed the war from the very “moment” it started.

A young man tells Joe Biden that his father lost his health insurance plan and the cost doubled, even though Obama promised insurances will be cheaper. He asks if Joe was lying or if he didn't understand Obamacare when he supported it.


We're working pretty hard on it. The message seems to be slowly sinking in, though it would be grand if I could get my Boomer Black friends to read this blog.

Now it's not as if the criticism of Bernie has been muted.  The Neera Tandens and Joy Reids and Mimi Rocahs are having brunch this weekend to plot a new strategy.  Nervous Nellies among blue progressives are crying for a unity ticket, presumably to avoid a disputed national convention.  Those to the left of Bernie are making the more cogent arguments, as usual.  <<-- The two links in this sentence are the best in this post, IMHO.  But about 90% of you who try to read them are going to have your heads explode before you can finish them.  Give it a go anyway.

Here's a collection of topics relevant to the election generally.

-- So Facebook Cleared Things Up for 2020: Politicians Can Totally Lie to Users

Please #DeleteYourFacebook.  Especially if you are a member of the Resistance terrified by Russian hacking (sic), still blaming Jill Stein for 2016, or just generally suffering from an undiagnosed case of cranial-rectal inversion.

If you think you would be unable to communicate with high skool pals or family or associated whatnot, try to remember what you did BFB: email listservs.

-- In a captivating interview with Matt Taibbi of Rolling Stone, Dennis Kucinich addresses his legacy as a Democrat before his time.


"... John Edwards and Hillary Clinton in 2007 were caught in a hot-mic moment complaining that Kucinich was 'not serious.' His actual problem was that he was serious." https://t.co/BIWlESRzzz via @RollingStone
— Generic Old White Guy (@PDiddie) January 9, 2020


I muse about this very same premise, as well as the Texas version of the 2000s Kucinich, David Van Os.  I would imagine that DVO would prefer to be compared to Bernie Sanders ... except for lacking any electoral success.

-- In a smattering of Libertarian developments, we have the former head of the FDIC, Sheila Bair (note the misspelling in Tom Sullivan's take) concern-trolling Democrats for her vote.  Mentioned at the very end there is the biggest news of the week for the Libs.

Born into a politically connected family, Chafee succeeded his father, John Chafee, as U.S. Senator in 1999 and established himself as a Liberal Republican, emphasizing support for gun control and environmental protections.  He was the only Senate Republican to vote against the authorization for the Iraq War in 2002, but supported the Patriot Act the previous year.  In the 2004 presidential election, he wrote-in former President George H.W. Bush.  Chafee was voted out of office in the Democratic wave election of 2006.  The next year he publicly endorsed the presidential campaign of future president Barack Obama and officially left the Republican Party.  He was elected Governor of Rhode Island as an Independent in 2010 but did not seek re-election.  He endorsed the re-election of President Obama in 2012 and joined the Democratic Party in 2013.  He sought the Democratic Party’s 2016 presidential nomination and participated in a widely criticized Democratic debate in which he called for the adoption of the metric system. Due to a lack of support, he withdrew before the primaries and endorsed Hillary Clinton for president.


More about McAfee at the very end of this post.  VS was referenced at the bottom of the Update two weeks ago.  Walsh was a Republican primary opponent to Trump earlier in 2019 but dropped out.  Weld and De La Fuente have already filed in various states as GOP primary challengers.


I am the strongest candidate to take on Gerald Ford and the Republicans. I’ll explain why in a speech tomorrow at noon. Tune in on your record players to station 30330.
— Joe Biden (Fake) (@JoeBdien) January 6, 2020