So much has happened since last Friday.  Bernie and Elizabeth have patched things up ... 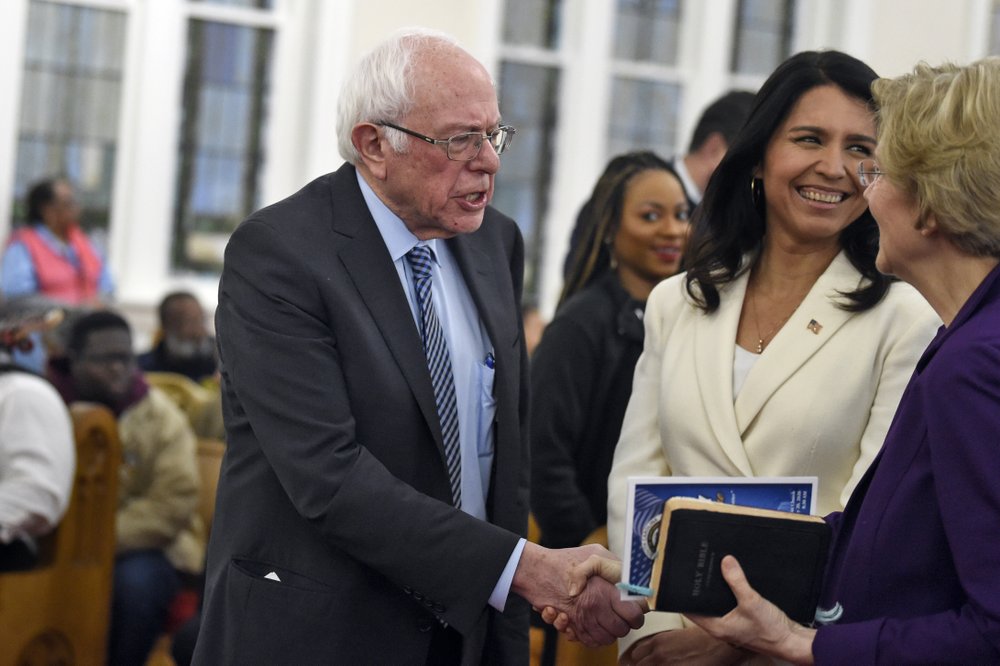 ... Sanders and Warren seem to now be working together to repair the disunity the media, trolls, and anti-progressives are trying to sow between them. Both are refusing to talk any more about the controversy, and instructing their staffers to do the same ...

And so, at least for that moment in South Carolina, did Biden and Bernie.

Former Vice President Joe Biden also offered a handshake and a smile to Sanders, two days after he called on Sanders' campaign to retract what he called a "distorted" video clip questioning his commitment to protect Social Security. It's reasonable to conclude that the exchange of pleasantries was simply for the cameras, but it also paused the leeching of bad blood long enough to ascertain who benefited -- and who didn't -- as regards the polling post-debate, post-fight, post-reconciliation.  And once again, despite the best efforts of the women on The View and Karen Finney on CNN and David Brooks of the New York Times and Rick Wilson on MSNBC ... Bernie is winning.

"Sanders has made gains nearly across the board, clearly pulling away from Warren among liberals" https://t.co/2LcSKhgbDu
— David Catanese (@davecatanese) January 22, 2020

Posting this in case our 5 to 9 point lead is reported in headlines as a “4-way statistical tie.” pic.twitter.com/XfnvE7ATDZ
— Heather Gautney (@HeatherGautney) January 18, 2020

DES MOINES — Senator Bernie Sanders has opened up a lead in Iowa just over a week before the Democratic caucuses, consolidating support from liberals and benefiting from divisions among more moderate presidential candidates who are clustered behind him, according to a New York Times/Siena College poll of likely caucusgoers.

Mr. Sanders has gained six points since the last Times-Siena survey, in late October, and is now capturing 25 percent of the vote in Iowa. Pete Buttigieg, the former mayor of South Bend, Ind., and former Vice President Joseph R. Biden Jr. have remained stagnant since the fall, with Mr. Buttigieg capturing 18 percent and Mr. Biden 17 percent.

The rise of Mr. Sanders has come at the expense of his fellow progressive, Senator Elizabeth Warren: she dropped from 22 percent in the October poll, enough to lead the field, to 15 percent in this survey. Senator Amy Klobuchar, who is garnering 8 percent, is the only other candidate approaching double digits.

Biden entered the race saying the 2020 general contest would be a struggle for the soul of America. First, though, he will have to win a struggle for the soul of his own party. Sanders is surging and is now in a near-tie with Biden both nationally and in Iowa, setting the stage for a mano a mano struggle between the two that could crystallize the electability vs. ideology question for Democrats as never before.

A false premise there at the end, IMO.  Just another example of the corporate media's manufacturing consent against Sanders.  This could be considered an improvement over the #BernieBlackout, but it continues to require a concentrated effort on social and alternative media to counter the ridiculous smears and outright lies that have replaced the silence.

Did I forget to mention Joy Reid?

This campaign is owed an apology.

What are they going to do next, phrenology?

This is why no one trusts the media. These people are digging their own professional graves. https://t.co/ykpCUrWgAl
— Briahna Joy Gray (@briebriejoy) January 18, 2020

Before the kissing and making up on MLK Day, the Times endorsed Warren and Klobuchar.

Of the 30 votes in the NYT Editorial Board's endorsement, 8 voted for Warren, 7 Klobuchar, & 6 for Cory Booker

NYT's top three candidates are collectively polling below 20% and one has already dropped out of the race. You've really got your finger on the pulse of the public, NYT
— Aisha Ahmad (@aishaismad) January 20, 2020

It's not too early for snark, is it?

I feel like we need to get body language expert @janinedriver to tell us what these looks mean. pic.twitter.com/taKLpLht9S
— The Bern Report (@TheBernReport) January 20, 2020

Let's see; I believe that brings us to *checks notes* Hillary Clinton.

Not feeling the Bern: “Nobody likes him, nobody wants to work with him, he got nothing done. He was a career politician. It’s all just baloney and I feel so bad that people got sucked into it," Hillary Clinton says of Sanders. ⁦@ByMattStevens⁩ https://t.co/XyCBvMbV1L
— Peter Baker (@peterbakernyt) January 21, 2020


At this point both Bernie and his supporters chose to take the high road.  And as the fresh polling above reveals, the attacks appear to be driving more support -- and more small-dollar contributions -- to his campaign.  But you might have guessed that Nate's Liver disagrees.

Sanders' momentum could be blunted by his absence from the campaign trail due to the ongoing impeachment trial (same for Warren and Klobuchar, of course).  Bernie has the best support network, IMHO, with AOC, Ilhan Omar, Michael Moore, the fabulous Nina Turner, and a string of new endorsements this week from Pramila Jayapal, Zephyr Teachout, and a variety of immigrant rights and labor activist groups.

Sen. @berniesanders’ strong team of surrogates prepare to hit the trail as the impeachment trial holds him up in DC. Sanders’ stand-ins, many of whom are black, brown and/or women, will stump for the senator coincidentally in the wake of @EWarren allegations pic.twitter.com/fmhA8fizO5
— Cara Korte (@CaraKorte) January 17, 2020

Biden, Buttigieg, Steyer, and Yang -- who picked up a non-endorsement endorsement from Marianne Williamson earlier in the week -- might still be able to make some hay out of their opponents being MIA in the two weeks before the Iowa caucuses.  We shall see.

Worth noting also is that Barack Obama is again rumored (first instance, last November) to be tanned, rested, and ready to take a break from golfing and lounging around Martha's Vineyard to herd a few cows (second instance, this week) onto Bernie's train tracks.  For now, he's letting his stooges do the dirty work.  The former president apparently prefers Warren, having mumbled a few concerns last summer about Joe's tendency to swallow his entire foot at seemingly every available opportunity potential threat to the Great One's legacy.

Speaking of Goofy Old Joe, he had another incoherently bad week.

"No you don't have the choice, but you had the choice to — that's why — I'm not saying, I said, if you like your plan, you can keep it, assuming — I should add the obvious — if your employer doesn't take it away from you. OK?" - Joe Bidenhttps://t.co/FRPZx4BVwS via @commondreams
— Hillary Says I'm Nobody (@PatFromm) January 17, 2020

Make sure the folks in your lives know. Joe Biden's dangerous for seniors, the poor, VETS & so many more.
He seems to have no empathy.
👇🏼😏Joe telling Senate he's tried 4 times to cut Social Security, Medicare, Medicaid, Veterans benefits & "everything". #BidenSocialSecurityCuts pic.twitter.com/TS9I8ncTyQ
— Silvers4Sanders (@Silvers4Sanders) January 19, 2020

This is one of the videos Biden alleged the Sanders campaign "doctored".

Joe Biden was forced out of the 1987 presidential race for plagiarism and lying.

Today, Joe lied about his record on Social Security, lied about the Bernie campaign doctoring a video and lied about the press confirming it. #BidenSocialSecurityCuts #JoeLies https://t.co/ninQLBoz9j pic.twitter.com/H8CU4P59Fd
— 🔥A NobodyforBernie2020🔥RegisterToVote🔥 (@BernForBernie20) January 19, 2020

As if that wasn't bad enough, the stress of it all is making him crack up.

WATCH: After a campaign event in Mason City, Iowa, @joebiden reacts to @edokeefe's question about his ongoing feud with @berniesanders: "Calm down, it's okay." https://t.co/a2hmMbnjnf pic.twitter.com/ymOMWRR2zP
— CBS News (@CBSNews) January 22, 2020

Biden's polling has slowly eroded in recent weeks as these chickens have come home to roost, but it remains entirely within the realm of possibility that he could float to the nomination on the politics of exhaustion.  Ennui as campaign strategy seems like a loser to me, but YMMV.

I need some laughs.  You?

“Bernie has been polling very well, but everybody on Team Sanders knew that we were one Clinton endorsement away from losing everything,” stated senior campaign official Ron McMeel. “We already avoided the threat of a New York Times endorsement, so now everybody here at headquarters has decided to take the rest of the afternoon off and get day drunk.”

Update (1/25):  I follow politics pretty closely -- all kinds of politics, all kinds of obscure political crap -- and I have never read or heard of a single one of these people.  Via William Saturn at Independent Political Report:

The Lesser-Known Presidential Candidates Forum is a quadrennial event held at Saint Anselm College since 1972 by the New Hampshire Institute of Politics which invites the lesser-known presidential candidates who qualify for either the Democratic or Republican New Hampshire primary ballot.  Archives of previous events (2000, 2004, 2008, 2012, 2016) can be found at C-SPAN.org.

Now I do remember when the following happened, although I can't seem to find record of my having blogged about it.

In previous events, fringe and eccentric candidates, often more familiar to us than the public at large, have provided memorable moments.  Notably, at the 2012 event (held in December 2011)performance artist (and current candidate for the Libertarian Party’s 2020 presidential nomination) Vermin Supreme"glitter bombed" anti-abortion activist (and 2012 independent presidential candidate) Randall Terry.  In 2016 (at which Supreme was barred due to the previous incident), businessman (and current 2020 Republican presidential candidate) Rocky De La Fuente met fellow candidate, attorney Michael Steinberg, and the two later went on to form the Reform Party’s 2016 presidential ticket.

The full list of nobodies is here.
Posted by PDiddie at Friday, January 24, 2020