The Texas Progressive Alliance needs this weekend to recover from its Pride partying this past weekend to be ready for the long Independence Day weekend.  Weekend after next.

Here's your round-up of the best of the left of and about Deep-In-The-Hearta from last week!

Wednesday evening's first Democratic debate features the two Texans, Beto O'Rourke and Julián Castro.  Both have some work to do to move into the first tier of front-runners.  PDiddie at Brains and Eggs updated his regular weekly post about the primary race on Sunday, after the South Carolina Democratic convention took place.

State Sen. Royce West remains the leader in the hottest rumored 'next contestant' parlor game in the run-up to the "Beat John Cornyn in 2020" sweepstakes.

Asked for comment Friday (June21), West said in a text message, "I'll make a decision whether to run next month."

"Frankly what will make me decide is the breadth & depth of the support, being able to raise the $ necessary & put together the team that I need to get it done," West tells @gromerjeffers & @JulieFineNBC5 in intvu that aired this AM https://t.co/7SolqZhrcA https://t.co/8iX129e0rf
— Patrick Svitek (@PatrickSvitek) June 23, 2019


Texas Monthly's "Best and Worst Legislators" contained few surprises to those of us who followed the past session closely.

News about the wretched conditions that migrants being held by Trump's ICE are forced to endure continues to be a national topic.  A Twitter war broke out over whether 'concentration camps' was the right phrase to describe the facilities, an indication that the moral, Christian, Golden Rule values espoused by the administration are a fraud.  But some organizations are pitching in to help.

The 2020 Census will be the next big test for Texas children, writes Better Texas Blog, and as the Lone Star State continues to be among the ten worst for kids in the nation in overall child well-being, an undercount will leave more children underserved.

Texas Latinos will soon be the state's largest ethnic group, Stephen Young at the Dallas Observer blogs, which helps explain why the TXGOP is working so hard to suppress their vote.

Off the Kuff laments the sweetheart deal Ken Paxton keeps getting from the criminal justice system.

Socratic Gadfly notes that -- as most recently illustrated by the Assange arrest -- the media, the courts and the public all alike are often selective in their support of all five freedoms of the First Amendment.

Jef Rouner stays on top of the Communism situation in The Woodlands.

Bill Dawson at Texas Climate News says these hot summer nights we're experiencing across the state are getting hotter as climate change progresses.  Christopher Collins at the Texas Observer reports that nearly 500,000 Texans live in communities with contaminated water, and our Congress critters aren't doing much about it.

Laredo residents will be able to participate locally in the award-winning film preservation program "Texas Film Round-Up" in July.  LareDOS has more details.

Through a partnership with the Texas Film Commission, the Texas Film Round-Up provides free digitization for films and videotapes, including local commercials, home movies, industrial films, and educational documentaries to preserve Texas media heritage. To qualify for free digitization, the films and videos must be Texas related, and participants must be willing to donate a digital copy of their materials to the project. The materials will be digitized in Austin and returned by mail to the owners, along with a digital copy.

Zachery Taylor publishes his summer reading list of books from the progressive underground.

Harry Hamid has a tale of being auctioned as a slave by King Cicada.

Mariann G. Wizard at The Rag Blog posts about the memorial service for Austin newspaper publisher Akwasi Evans, who passed in April and whose life was celebrated yesterday. 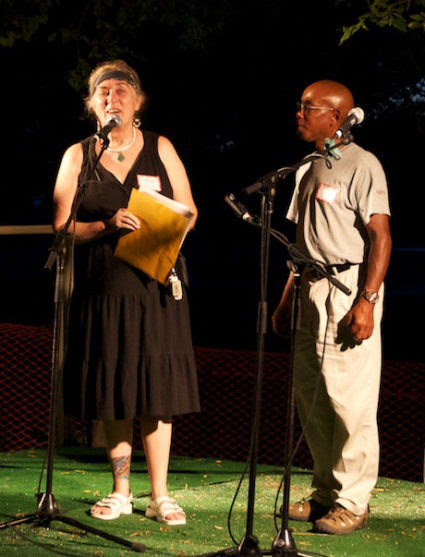 
In Texas Standard's news round-up of June 21, authorities in the Dominican Republic say that a Texas man is the accused ringleader of the shooting of baseball star David Ortiz, and that Ortiz was not even the intended victim.

Finally, Susie Tommaney at the Houston Press has a long list of Fourth of July events in the and around the Bayou City.
Posted by PDiddie at Monday, June 24, 2019