The Texas Wish-It-Was-Actually-Progressive Alliance supports the vision of Dr. Martin Luther King Jr. on this federal holiday, and denounces the attempts to usurp and reassign them for their own lousy conservative purposes by charlatans like Mike Pence.


Pence says Trump is acting “exactly like” Martin Luther King in demanding a border wall and quotes the “I Have A Dream” speech. pic.twitter.com/twZvIKzn7V
— Waleed Shahid (@_waleedshahid) January 20, 2019


Social justice events, and news spawned from them, dominated the past weekend. A quick review:

-- The 2019 Women's March carried on with rallies across the nation despite accusations of anti-Semiticism directed at some of its organizers.


Robin Paoli, writing for the HouChron, spells out why Houston women keep marching.

-- The Indigenous Peoples March in Washington was marred by a group of high school students from Covington, KY who squared off with Nathan Phillips, an Omaha tribal elder and Vietnam veteran.  The smirking young man captured in video has been identified as Nick Sandmann.


-- And today, the two MLK parades in H-Town draw national focus as one of the parade organizers has invited the two conservative electoral challengers to Mayor Sylvester Turner, Bill King and Tony Buzbee, to lead his parade ... competing with the city-sanctioned one.


What would Dr. King do?

(Organizer Charles Stamps) rejected the idea that his selection of Turner's rivals as grand marshals was a political swipe at the mayor, though he acknowledged he would like Turner to lose his bid for a second four-year term in November. Stamps said he sees nothing wrong with having two parades and that King would support the idea.

"He would join our parade and say there should be a thousand of these things," Stamps said.


(Wayne Dolcefino has been busy piling on Turner, claiming the mayor is trying to hide the use of federal disaster money earmarked for Harvey relief.) 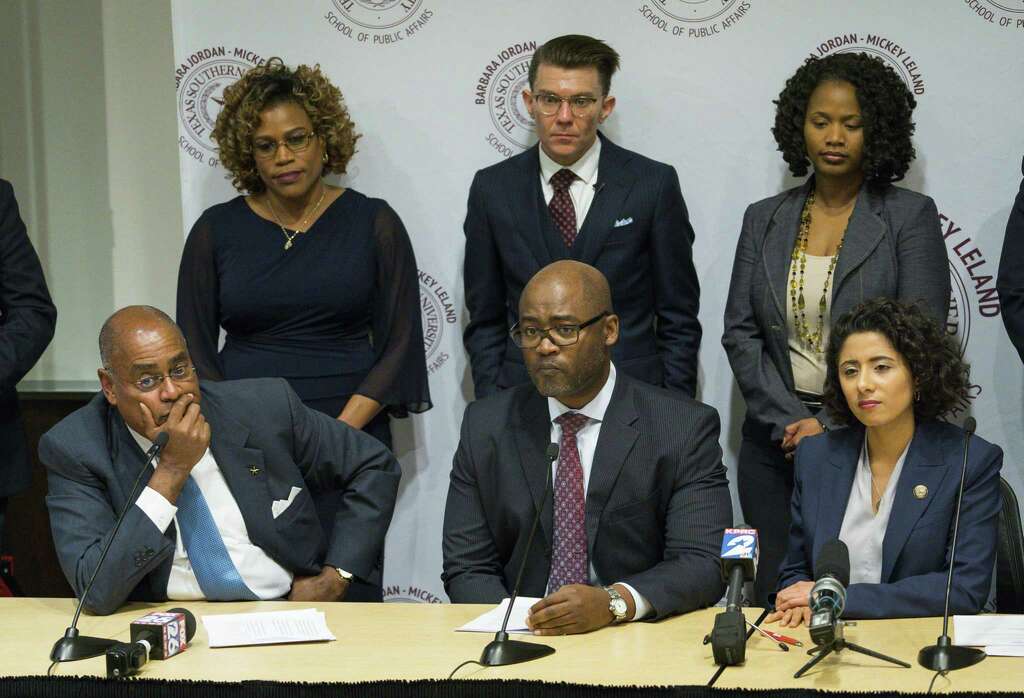 The new slate of Democratic judges have approved comprehensive revisions to Harris County’s bail system that could clear the way for thousands of people, regardless of income, to avoid spending time in jail while awaiting trial on minor offenses.

The county judges plan to present their new court protocol to a federal judge, in a joint request with the sheriff, the county and poor defendants, in a historic class action over bail practices, asking that she implement the revised system as a foundation for a settlement.

“What it means is that no one will be in jail because they cannot afford to get out,” said Court at Law Judge Darrell Jordan, the presiding judge, who has been on the bench since 2017. “This is a history-making moment for civil rights, not only in Harris County but for the US, because as the third-largest county in America, larger than 26 states, what we do here will be watched by all and can be emulated or replicated by all.”

- @franklinbynum, at yesterday’s press conference on the county’s changes to tear down cash bail.

The punishment bureaucracy that haunts our most oppressed is beginning to crumble. pic.twitter.com/vAMH1E2Xfi
— Houston DSA (@HoustonDSA) January 18, 2019


In Galveston County, a lawsuit brought by the ACLU to eliminate the practice of wealth-based detention continues to move toward injunctive relief.

The Fifth Circuit Court of Appeals ruled against Planned Parenthood and for the state of Texas (as represented by AG Ken Paxton).

A federal appeals court has lifted a lower court order that blocked Texas from booting Planned Parenthood out of Medicaid, potentially imperiling the health care provider’s participation in the federal-state health insurance program.

A three-judge panel on the U.S. 5th Circuit Court of Appeals ruled Thursday that Sam Sparks, the federal district judge who preserved Planned Parenthood’s status in the program in February 2017, had used the wrong standard in his ruling. The appeals court sent the case back to him for further consideration.

The case stems from a long-running flap over a misleading video released in late 2015 by the anti-abortion group Center for Medical Progress, which suggested that abortion providers at Planned Parenthood sold fetal tissue for profit. The sting video included edited clips of Planned Parenthood officials discussing the use of fetal tissue for research. A string of investigations that followed the video’s release were unable to confirm its claims, but it energized a crusade against the health care provider and sparked outrage from the state’s Republican leadership.


Women's reproductive freedoms are under assault all across the country.  Demonizing Planned Parenthood is simply another front for stigmatizing poor women seeking birth control.  Just two women's clinics remain open in San Antonio after the closing of Whole Women's Health in the Alamo City last week.

“Whole Woman’s Health has been a heroic advocate and provider of women’s health," said Mara Posada, director of public affairs for Planned Parenthood South Texas. "We regret that the state of Texas has made it increasingly difficult for providers of abortion care to be here for women who need them. Abortion is health care and health care should be accessible.”

“What changes is how people get access to those services,” (WWH corp. v-p Andrea Ferrigno) said. “Our decision to close the San Antonio location stems from the stricter regulatory landscape we have seen across the state for the last few years that disproportionately affected smaller providers. The regulations make it more difficult to access care and increases the cost of the services, making it unsustainable.”


After the US Department of Justice changed sides in the Texas redistricting lawsuit (the case argues that the state's long history of racial discrimination demands it be placed back under pre-clearance), the plaintiffs responded that the DOJ missed the deadline, and didn't follow the rules.

An op-ed by a group of Houston area faith leaders gives a rebuttal to Trump's warning about his self-created immigration crisis at the southern border being 'an emergency of the heart and soul'.  Groups like the Texas Pastor Council have come out in full support of the Trump agenda, and their shrill voices may be heard by some as speaking for the whole of the religious community.  These leaders provide the counter-weight.

There are two special elections under way to fill vacant Texas House seats, but you wouldn't know it judging by voter turnout.

HD79 special: Through Friday, the last day for which numbers are available, a total of 1,083 people had voted early, amounting to 1.2% of registered voters. Polls were closed today (Sunday) and will be closed tomorrow (Monday) for the holiday.

HD145 special: Through today (Sunday), a total of 637 people have voted early, amounting to 0.9% of registered voters. Polls will be closed tomorrow (Monday) for the holiday.


Both TXElects and the SA Current have the contenders for the HD135 empty chair.

Five filed for the HD125 special election to fill the unexpired term of former Rep. Justin Rodriguez (D-San Antonio), who resigned to accept an appointment to the Bexar Co. Commissioners Court:
Early voting begins January 28 for the February 12 special election.


There are municipal elections galore across the state; Fort Worth Democrats are encouraged by their candidate for mayor, Tarrant County Dem chair and former AT&T VP Deborah Peoples challenging Republican incumbent Betsy Price in May.  Stephen Young at the Dallas Observer is tracking that city's mayoral contest, with former state Rep. Jason Villaba the latest in, and former city attorney Larry Casto the first out.  He's made no mention yet of the Socialist Workers Party's Alyson Kennedy, however, whose announcement in The Militant indicates she's been campaigning since January 12.

Off the Kuff ran down the elections Houston has on the calendar this year.

Twenty-twenty presidential campaign developments caught the attention of Texas bloggers.  PDiddie at Brains and Eggs had a piece on five of the women getting ready to run, focusing on the enigmatic Tulsi Gabbard.  He followed up with "The Corporacrats" (Kirsten Gillibrand, Kamala Harris, and Amy Klobuchar).  SocraticGadfly saw the Gabbard announcement and examined the recipe for the Tulsi Kool-Aid, and who's mixing and pouring it.  David Collins also had something brief to say about Tulsi's bid.  And Zachery Taylor has several presidential candidates who are being censored by the mass media.

And Texas Lege business is getting serious: Better Texas Blog takes their first look at the opening state budget proposals, while Raise Your Hand Texas has a toolkit to navigate the legislative session.  The TSTA Blog explains the problem with merit pay for teachers.  And Frontloading HQ takes note of Rep. Lyle Larson's "flamethrower" bill, so called because it would move the Texas primary from March to the end of January in an attempt to make the Lone Star State more relevant in picking the presidential nominee.  (It's not given any better odds of passing than it has had in legislative sessions past.)

In this week's "Texas Republicans Behaving Badly" news, the Tyler Morning Telegraph reports that Louie Gohmert took Steve King's side in his latest racist brain fart.  The Current points out that Ted Cruz, Kevin Brady, and former US Rep. Lamar Smith provided lots of financial support to King in recent years.  And Juanita Jean has an update on the employment status of Blake Farenthold.

Ty Clevenger at Lawflog blogged about the DPS releasing the report about demoted Texas Ranger Brent Davis of Tyler.

Sarah Martinez, again at the San Antonio Current, has some lighter fare, reporting on Dr Pepper's effort to become the official soft drink of Texas.

Ken Hoffman at CultureMap gets all the great perks: he caught a free flight to Manchester, took in a soccer match, then rode the train to Liverpool and got his Beatles fix taken care of. 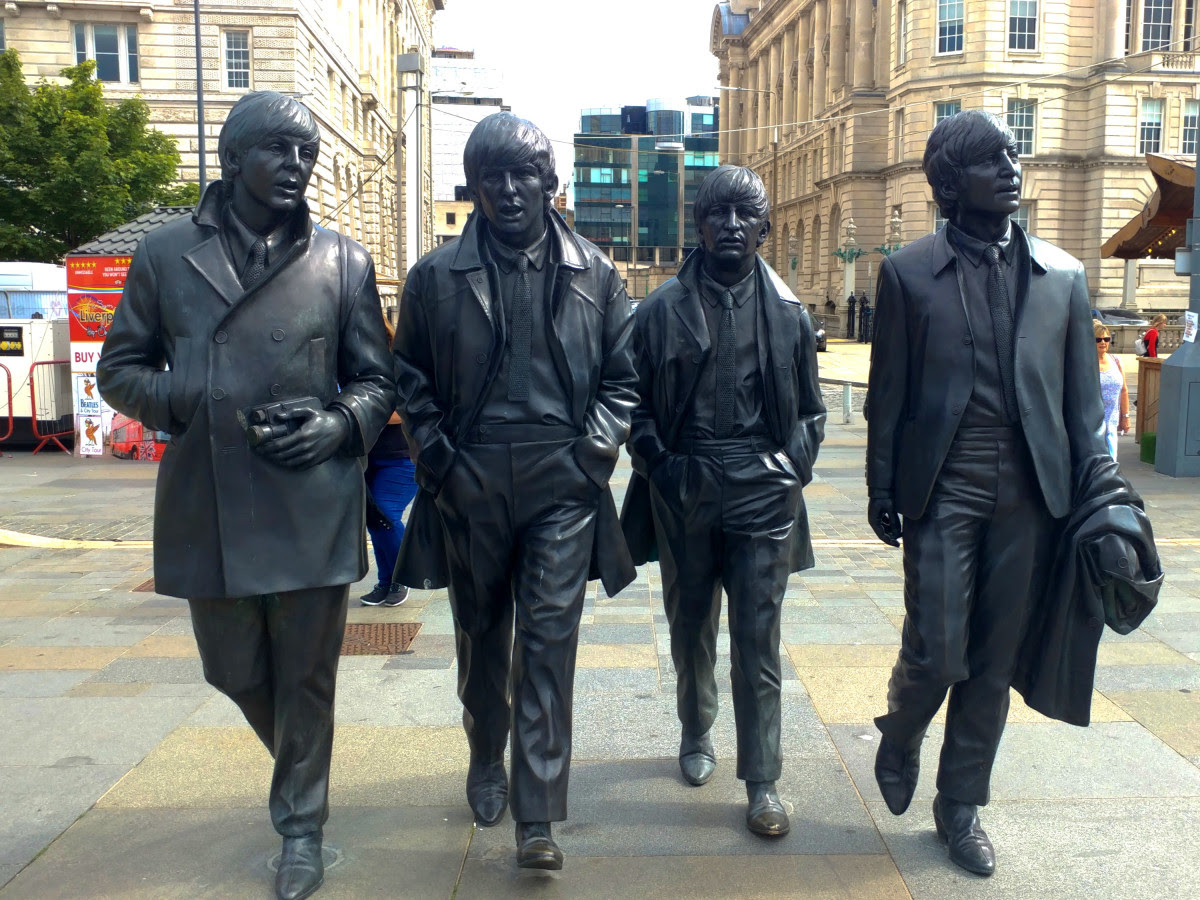 The Beatles bus takes you past John Lennon’s boyhood home on Menlove Avenue and Paul McCartney’s family home on Forthlin Road. We stopped at Strawberry Field for a photo op. We drove along Penny Lane and saw the barbershop, bank, and fire station in McCartney’s song. The tour guide carries a guitar and sings Beatles songs as the bus approaches places in John, Paul, George and Ringo lore.


And here's a slideshow of the best eateries to visit during Galveston Restaurant Week (lasting nearly a month), starting this weekend. 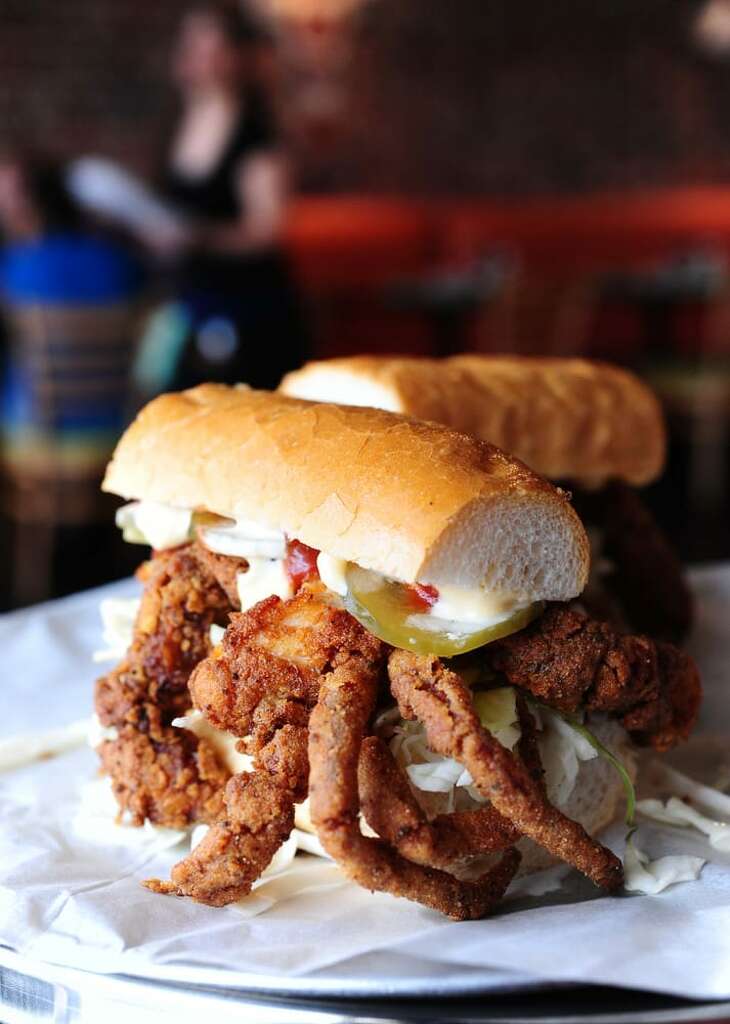 (From) January 26 through February 20, 33 participating restaurants will offer either a breakfast, lunch and or dinner 3-course meal for a steal. According to the Galveston Restaurant Week website, two- or three-course dinners will be priced between $20-$35 and two-course lunches, breakfasts and brunches will cost between $10-$20.

Proceeds from the meals go to Access Care of Coastal Texas to provide lunches for persons with HIV or AIDS.