B&E Co-Texans of the Year: Beto and Travis Scott

(Ed. note. Still doing the work that the rest of the Texas semi-Progressive Alliance gave up on a couple of years ago.) 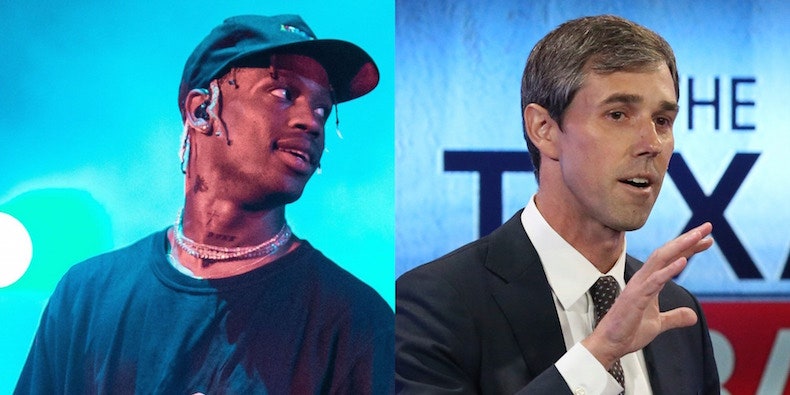 And there you sat thinking they had nothing in common.


What more needs to be said about the recently retired Congressman from El Paso that hasn't already been said ... or for that matter is currently being said?

In the span of seven days, Beto O'Rourke went from expanding his statewide cult of personality from sea to shining sea to exploding on the 2020 launching pad, writes PDiddie at Brains and Eggs, in a post originally motivated by two hilarious takes about Bernie Sanders from Bay Area Blue Dog John Coby.  But it was a takedown by David Sirota at Capital and Main of Beto's voting record that did the most damage to the erstwhile Congressman's reputation as a "progressive", and that in turn spawned an article about a "war" on O'Rourke being waged by "Berniebros".  The geek fighting didn't just carry on all weekend on Twitter, it again ruptured the 2016 fault lines between the center of the Democratic Party and the left.


And as the Christmas lights come off the tree and the wrapping paper fills the recycling bin, the snark keeps leveling up.


I mean, I get it that Beto 2020 is desperately trying to be a thing, but as a Sanders supporter, I can’t support any candidate until Putin calls Susan Sarandon to tell her who* to tell me to vote for.


Whatever happens with the two old white dudes running to be top Donkey in two years, you can rest assured that Beto/Bob will keep breaking news of one kind or another throughout 2019.

So about the man who re-opened "Astroworld" this year and took it across the country ...

The apex of Travis Scott’s second night at Madison Square Garden for his Astroworld — Wish You Were Here tour wasn’t when Kendrick Lamar — leading candidate for best rapper alive — made a guest appearance to perform his verse on “Goosebumps.” It wasn’t “Stargazing,” the rattling, pyrotechnic-inflected opener that set the tone for the night. It wasn’t even “Sicko Mode,” the second most popular song in the country that Scott extended to close the night out. Instead, it was one of his earliest hits: “Antidote.” As the opening synths swelled, a young woman with platinum blonde hair walked onstage and the audience screamed. Kylie Jenner was then buckled into a makeshift rollercoaster car. As her baby father performed one of his biggest songs next to her, she documented the entire moment on her phone and kicked her feet to the beat. They kept riding, back and forth over the roiling crowd, for three more songs.

Inside the stadium, the crowd milling around seems more likely to watch KUWTK than listen to “Mo Bamba.” A man in a suit walks by with his elementary school-aged daughter, smiling gleefully. A suburban mom ushers her daughter and friends to premium seats. A child stops, picks up his phone and debates his parental figures about the fiscal responsibility of buying food at Madison Square Garden concession stand prices. He swipes his debit card. Travis Scott has officially gone mainstream.

Travis Scott wants to see Kylie Jenner before her private jet takes off, but he’s running late to meet her, so he punches the gas on his Lamborghini SUV and sends the speedometer into hysterics: 80 miles an hour becomes 95 becomes a screaming 110, or exactly double the speed limit on this particular stretch of Houston highway. It is pouring rain. Farther up in Scott’s lane, where traffic is thicker, a Land Rover brakes, but Scott — left hand on the wheel, right hand on his phone, eyes on a maps app — does not. The Land Rover’s rear bumper is maybe 200 feet away, then 75 and then, sickeningly, 25. Scott has stopped accelerating but, for unclear reasons, he hasn’t touched the brake.


You can take the wheel from there.  L'il mo' from TexMo.

Travis Scott is the future. Ask Lil Wayne, who gushed about the 26-year-old artist from the stage during his sub-headlining set at Scott’s Astroworld Festival in Houston on November 17. Ask Houston rap legend Bun B, who likes to talk about how “there’s something special” about Scott. You could even ask Mayor Sylvester Turner, who declared November 18, the day after the festival, “Astroworld Day” in Houston.


See him at halftime of the Super Bowl in February as well (though Reverend Sharpton's recent opinion about that may resonate).

This has been a PSA for all of us elderly Caucasians out here.  Twenty nineteen is likely gon' be kind to both men, though it might be difficult to improve upon this past year.
Posted by PDiddie at Wednesday, December 26, 2018