The Texas Progressive Alliance is gathered here today to get through this thing called mourning the loss of Prince as it brings you this week's blog post roundup. 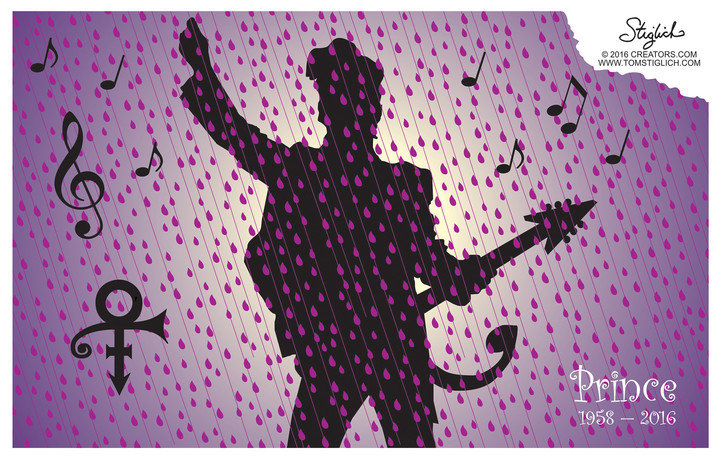 Off the Kuff looks at the different reactions to Houston repealing HERO and North Carolina passing its harsh anti-equality law.

Libby Shaw at Daily Kos insists that something has to be done about Houston’s serial flooding.  Bold political leadership and action are woefully lacking. Houston: We really can’t do this every year.

Socratic Gadfly notes there's no "old lace" in the GOP race, just arsenic vs cyanide, and speculates on how it might play out.

The greater Houston area has received four '100-year" storms in the past twelve months.   PDiddie at Brains and Eggs thinks it's either time to find a new name for these apocalyptic floods, or perhaps address the various root causes (climate change, too much concrete, greedy land developers) of them.

Egberto Willies observes that even a Koch brother is afraid of a Republican presidency.

Texas Leftist returns after hiatus with two posts this past week, regarding Texas Republican leaders' wanting to refuse their Medicaid expansion cake but eat it too, and a 'wake up and smell the coffee' post about Houston's serial flooding.

The HugGate scandal in Denton grew more significant in a two-part story detailed at TXsharon's Bluedaze.

Lewisville's Lake Park won't be open in time for Memorial Day weekend, due to flooding and for the second consecutive year, reports The Lewisville Texan Journal.

Neil at All People Have Value took note of the hopeful 2016 Texas Green Party convention. APHV is part of NeilAquino.com.

And if there are any Star Wars fans among Wrangle readers, you have an opportunity to be an extra in scenes for that series' next movie, to be filmed near Victoria, Texas (sometime in 2017, so plenty of time to get prepared).

Beyond Bones takes a stand against shark finning.

The Makeshift Academic urges Democrats to accept a lame-duck confirmation of Merrick Garland to the Supreme Court if it is on offer.

Grits for Breakfast dismisses talk of a "crime wave" in Texas.

Paradise in Hell just can't even with Sid Miller.

Prairie Weather asks what a blogger is supposed to do when he/she is fed up with the news, and answers the question.

And Pages of Victory describes some of the artists and songs among his old record collection.
Posted by PDiddie at Monday, April 25, 2016