Houston now receives a hundred-year storm on a quarterly basis 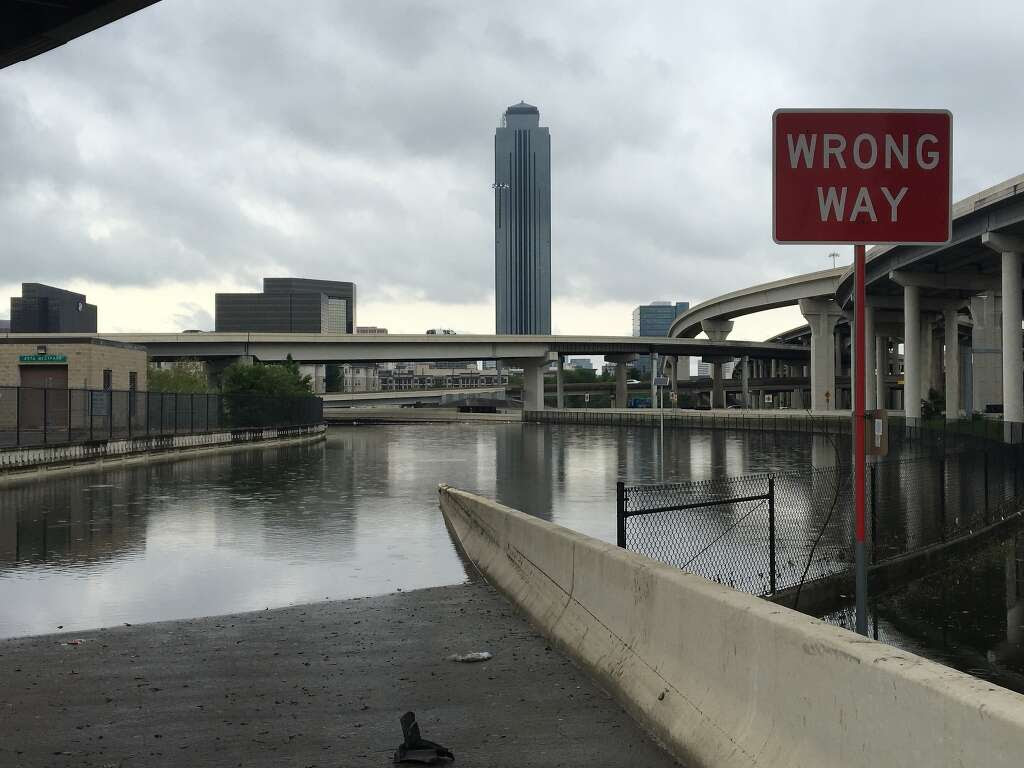 Perhaps we should rename them.

Houston (was yesterday) in the midst of an unbelievable deluge, with already more rainfall in a single day than any hurricane to ever hit the hurricane-prone city. The National Weather Service has called Monday’s flooding “historic.”

More than 21,000 square miles of southeast Texas is now in a flash flood warning, but the worst flooding seems to be occurring in western parts of the Houston metro area. More than 17 inches of rainfall has fallen in just the past 24 hours in some neighborhoods, with about 1 foot of rain coming just since midnight—already making Monday the rainiest day ever in Houston before noon. At Houston’s George Bush International Airport, 11.16 inches fell by 10 a.m., breaking the all-time daily record of 10.34 inches set on June 26, 1989. And it’s still falling. More rain is in the forecast for the next 36 hours or so. Update, 6:35 pm ET: The rain has stopped for now, with 11.75 inches measured at George Bush Airport on Monday.


5 dead, 900 rescued from floodwaters in their homes or on the highways and roads.

Officials in Harris County, where Houston is located, have declared a disaster area and estimate at least 1,000 homes have already been flooded. More than half the watersheds in Harris County are experiencing significant flooding, with at least one cresting above its estimated 500-year flood mark, a new all-time record. Bayous and creeks have overtopped levees in some parts of Houston, and the water continues to rise, with downtown Houston also in the direct path of some of the worst floodwaters.

Emergency personnel in Houston have already performed hundreds of water rescues, with firefighters taking to boats. With lightning crashing overhead, one journalist helped rescue a man after he had driven into floodwaters that threatened to overwhelm his car. Another image of a man rescuing an armadillo was widely circulated on social media, and there’s also video of people teaming up to save a stranded horse. 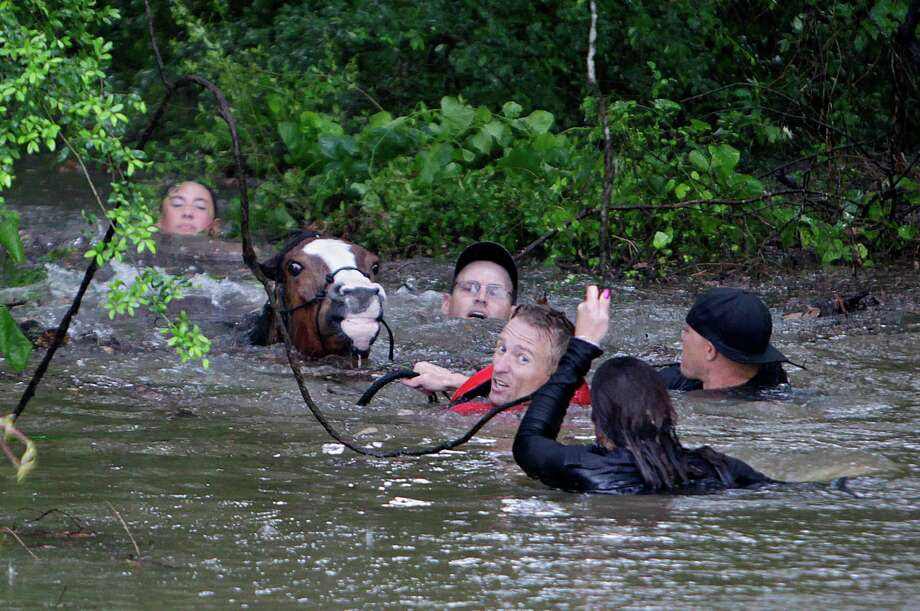 They saved more than 70 of the 80 or so at the stables in the northwest portion of the county, but not all of them.  Very upsetting video here if you can take it.

Honestly though, it's just situation normal for us old hands around here.  The main thing you have to do is stock up and hunker down.  This is obviously not feasible for the working class, those who must travel to jobs via public transit, and others of the least fortunate among us. 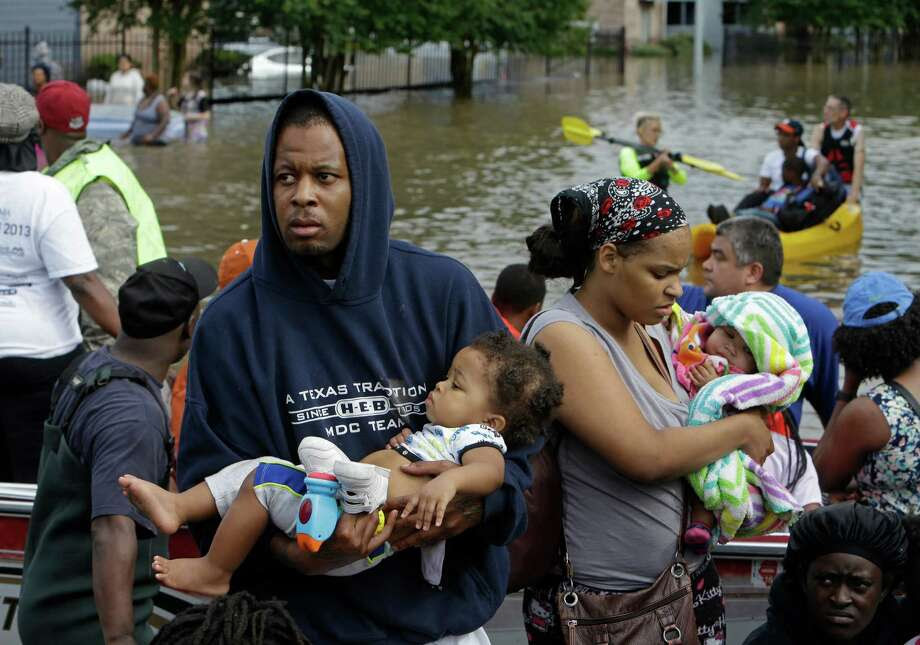 The poor always bear the brunt of nature's temper tantrums, exacerbated in H-Town by poor planning and decisions made long ago by short-sighted elected officials and greedy real estate developers.  But that's a digression.

The National Weather Service had been warning of the potential for very heavy rainfall in southeast Texas since at least last Tuesday, as a continental-scale blocking pattern—in which an unusually stable jet stream locks weather systems in place—made conditions favorable for a stalled weather front to unload copious amounts of tropical moisture.


I went to the grocery store on Friday, had some ice chests as backup in case we lost power.  (We did not.)  The only times I so much as opened the outside door yesterday was to let the dogs out to pee, and they didn't want to go outside either.  Because both I and the wife telecommute, we don't ever worry about traffic or flooded roads nor experience the accompanying stress.  (This may be white privilege; it's certainly a benefit of our class status.)

I think it's a rite of passage living here; you have to get your car flooded out at least once in order to learn your lesson about these things.  Ours was in 1994 and this old NYT account is accurate.  This was before blogging, and there's a great tale I have to tell about getting through that storm, but not today.

Since the 1950s, Houston has seen a 167 percent increase in the heaviest downpours—defined as the number of days where total precipitation exceeded the heaviest 1 percent of all local events—one of the fastest rates of increase anywhere in the country. That’s exactly what’s expected to happen as the climate warms, since warmer air can hold more water vapor than cooler air.

An increase in the frequency of heavy rain events has long been considered one of the likeliest consequences of global warming, and a recent comprehensive National Academies report endorsed this link. Blocking weather patterns like this weekend’s may be happening more often due to climate change, boosting the likelihood of heavy rainfall events, according to a new study published last week.

This is at least the fourth major flood in the Houston area in just the past 12 months, with previous flooding events last May, June, and October pummeling Texas hard. The triangle between Dallas, Houston, and San Antonio is sometimes referred to as “flash flood alley” because of its dangerous mix of hilly terrain, sprawling urbanization, and frequent heavy downpours, adding to the region’s already considerable vulnerability to climate change.


This go-around it was north Houston (from Aldine to Greenspoint) and northwest Houston (from Spring Branch to Cypress) that took it in the neck.  Less than a year ago it was my side of town, Meyerland, which still got a pretty good hit (first drone video here).

There is a great irony in the fossil fuel capital of the world being forced to endure the calamitous side-effects of the fossil fuel industry's misadventures over the past hundred years or so.  Even as oil in tank farms in Cushing, OK fills to the brim, and supertankers line up off the coast of Basra, Iraq to bring over more, Americans -- and Texans -- have reduced their consumption by switching to alternative fuels like wind and solar, and protest the mineral barons who are trying to squeeze a few more drops out of their respective lemons.

"Leave It in the Ground" doesn't seem to be resonating with the Persian Gulf oil states.

This business is as dead a man walking as your nearest Republican neighbor.  You can't tell a fucking zombie anything, though.  He just wants to eat your brain.
Posted by PDiddie at Tuesday, April 19, 2016