No sleep 'til (after) Brooklyn 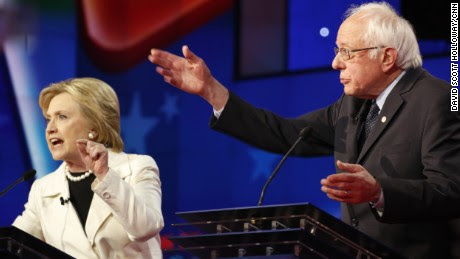 Apologies to the Beasties.

The bitter struggle between Hillary Clinton and Bernie Sanders for the Democratic presidential nomination erupted into fractious and at times personal attacks on Thursday night as the simmering animosities between the two candidates burst onto a Brooklyn stage.

In the ninth and possibly last televised debate between the former secretary of state and US senator from Vermont, the candidates hurled themselves at each other in barely restrained terms. From the first minute of the two-hour event to its final moment, they questioned each other’s judgment, susceptibility to lobbyists and grasp of political reality in by far the most heated discussion of the campaign to date.

From Wall Street to the minimum wage, gun control and mass incarceration, Israel and climate change, the rivals battled to set themselves apart in the hope of pulling ahead in the race. With the stakes so high – just five days before the critical ballot in New York state that carries a bonanza of 291 delegates out of the 2,383 needed to win – the rhetoric also reached a new intensity.


Right from the get-go, they were slugging each other.

“Oh my goodness, they must have been really crushed by this,” Sanders said to Clinton earlier on, referring to her claims that she was tough on the big banks. “And was that before or after you received huge sums of money by giving speaking engagements?” he went on, in a tone that went beyond sarcasm into the fringes of disdain.

The debate was feisty from the off. Sanders walked back from previous comments that he thought his competitor was unqualified for the White House. Answering a question on whether Clinton had the experience and intelligence to be president, he said: “Of course she does.” But hardly pausing for breath, he clarified: “I do question her judgment. I question a judgment which voted for the war in Iraq – the worst foreign policy blunder in the history of this country.”


There's much more at the Guardian, CBS relates more detail of the issues they quarreled about, and CNN has six takeaways, but ultimately this sparring revealed that the campaigns reached critical mass, and the most recent polling shows Sanders falling farther back.

Latest opinion surveys suggest that Clinton is extending her lead in New York with an NBC 4 New York/Wall Street Journal/Marist poll putting her 17 percentage points ahead, on 57% to Sanders’ 40%. But Sanders shows no signs of going away quietly. He came into the debate with wind in his sails, following an epic rally in Washington Square park in Manhattan on Wednesday night, attended by 27,000.


Bernie is on his way to the Vatican this morning to give a speech.  Hillary canceled a town hall on Good Morning America today, probably to rest up for her two California fundraisers this weekend, including another gig with the Clooneys.  New Yorkers vote in four days, and your taxes are due (if you haven't done them already, of course).

I'm going to try to make it out to the CounterCurrent Festival this weekend, maybe eat some crawfish.  See you later.

Update: Harry Cheadle at VICE wraps it up tight,  Socratic Gadfly's take is sharp, with a cartoon I was planning on using (Juanita Jean at the WMDBS usually pre-empts some of my selections on Fridays, making me scramble),  and Talking Points Memo has the details of the kerfuffle that has broken out overnight between the Israeli/Jewish liberal and conservative sides, who keep fighting their own war between themselves as a smaller skirmish within the larger Palestinian question.  The first paragraph at this MSNBC link tells what the debate mentions about Israel and Palestine were really all about.

Sanders was speaking mostly to American liberals (who are increasingly sympathetic to the plight of Palestinians), while Clinton was speaking to New Yorkers (whose Jewish community is still pretty pro-Israel). And by the way, yesterday’s NBC New York/WSJ/Marist poll – which came out before the debate – showed Clinton leading Sanders among Jewish Democrats in New York by a 2-to-1 margin, 65%-32%.

Update II: Oh, and Vox has 2 winners -- Bernie Sanders and the Fight for $15 (minimum wage), catching Hillary in another of her ridiculous waffles -- and three losers: Clinton (naturally), the lame-ass New Democrats, and 'liberal technocrats'...

The dynamic you see here is one where there's such overwhelming grassroots support for an idea that even policy elites who traditionally take it upon themselves to moderate and channel on-the-ground sentiment into more viable policy avenues aren't doing that. They're jumping on board and then talking to journalists like me off the record about their concerns, and about their concerns as to what happens if their misgivings were to become public.

Bernie was too polite in not joining Hillary in talking way over time limits, and other things. Per what you've said here before, even though he's extended the run longer than expected, it probably goes hand in hand with "playing nice" when the time comes.

On the Zionism issue? My gut says that for younger Jews, it's about as much an issue as Castro is for younger Cuban-Americans.

The cartoon? I got a heads-up on that from the professional side. My paper gets that JP Doodles, but, especially with the elections, I sometimes use what's on King Features' feed for non-dailies, which is where we get our crossword, sudoku and other filler.