It don't matter if you're black or white

Rest in peace, Michael Jackson.  I'm afraid it still does.

Some demonstrators hurled rocks at police as others scattered, while smoke engulfed the area. A Reuters reporter saw two young men preparing what looked like petrol bombs in a bus-stop shelter, their faces covered by bandanas. Police said protesters had thrown petrol bombs at officers.

Protesters have gathered every night since Saturday when 18-year-old Michael Brown was shot to death in the mostly black suburb of St. Louis, during what authorities said was a struggle over a gun in a police car. Some witnesses say he was outside the car with his hands up.

Police have deployed camouflage-clad officers in body armor, including one manning a rifle on a tripod atop an armored car, to Ferguson.

"I've had enough of being pushed around because of the color of my skin. I'm sick of this police brutality," said one protester, who gave only his first name, Terrell, 18. "I'm going to keep coming back here night after night until we get justice." 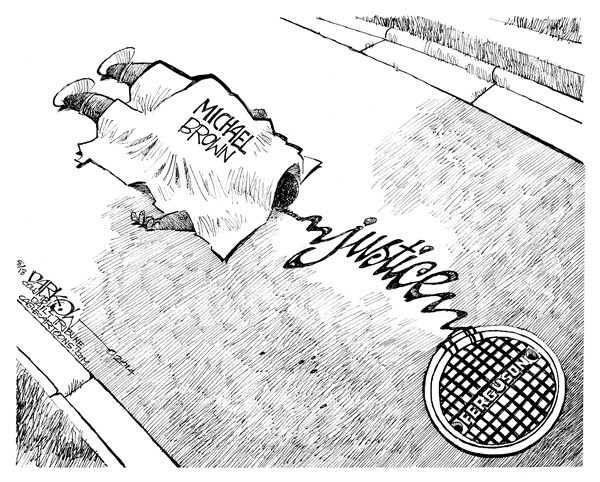 Yeah, that's pretty much the story now.  Trayvon Martin, Eric Garner, Jordan Davis, and this week, Michael Brown.  Next week it will be another black man, dead fairly quickly at the hands of police officers or vigilantes who are not, in questionable circumstances.

Racism is over in America, say conservatives.  Their children aren't the ones, of course, being carried to the cemetery week in and week out.  But the most important thing to keep in mind is that the riots in Ferguson aren't only about these dead black men.

It's also about the ones still with us -- not 'living' so much as just trying to stay alive.

...(I)t is about the bitter sense of siege that lives in African-American men, a sense that it is perpetually open season on (them).

And that too few people outside of African America really notice, much less care. People who look like you are every day deprived of health, wealth, freedom, opportunity, education, the benefit of the doubt, the presumption of innocence, life itself -- and when you try to say this, even when you document it with academic studies and buttress it with witness testimony, people don't want to hear it, people dismiss you, deny you, lecture you about white victimhood, chastise you for playing a so-called "race card."

They choke off avenues of protest, prizing silence over justice, mistaking silence for peace. And never mind that sometimes, silence simmers like water in a closed pot on a high flame.

One can never condone a riot. It is a self-defeating act that sells some fleeting illusion of satisfaction at a high cost in property and life.

But understanding this does not preclude recognizing that the anger we see in Ferguson did not spring from nowhere, nor arrive, fully-formed, when Michael Brown was shot. It is the anger of people who are, as Fannie Lou Hamer famously said, sick and tired of being sick and tired.

So maybe you have heard about the rally in Houston's Fifth Ward this weekend being held by the supporters of Open Carry Texas.

The event on Saturday afternoon is set to be located at the corner of Lyons Avenue and Lockwood, and scheduled to last about two hours, with two guest speakers included. It will not be a march, as past Open Carry Texas appearance have been, but a static event.

On Wednesday night members of the local Open Carry Texas group and (leader CJ) Grisham will be meeting with members of the community and the Houston Police Department to discuss what's coming up. Grisham says that he will not subject his members to an unsafe environment.

Maybe we'll hear today they called it off.  Because maybe Grisham took note of Quanell X's response.  Update: First it was no, then it was yes.

Meanwhile community activist Quanell X has had some terse words for the Open Carry people. He told KPRC-TV that if the group shows up armed that people from the community will show up with weapons too to counter them.

"Coming like this is totally unacceptable. So if you do come, I guarantee you we will not bring a butter knife to a gun fight," Quanell X told KPRC-TV.

Gun rights activists, overwhelmingly Caucasian and conservative, travel to Houston's most predominant African American neighborhood with their rifles slung across their backs in order to stage a rally.  What could possibly go wrong?

Sure does feel like the '60's all over again to me.  The race cauldron is boiling once more across America, which means it's coming to a neighborhood near you.

We desperately need some leadership on the various issues of social justice, and we need it most -- right now -- from some of our leaders who don't look like Barack Obama.  Has anyone checked in with Hillary Clinton lately?

Update: The treatment of the media covering the developments -- while important -- is the secondary story.

County police in riot gear and armored tanks gave way to state troopers walking side-by-side with thousands of protesters as the St. Louis suburb where an unarmed black teen was shot by a city police officer overwhelmingly avoided violence Thursday after nearly a week of unrest and mounting public tension.

The dramatic shift came after Missouri Gov. Jay Nixon assigned oversight of the protests to the state Highway Patrol, stripping local police from the St. Louis County Police Department of their authority after four days of clashes with furious crowds protesting the weekend death of 18-year-old Michael Brown.

"All they did was look at us and shoot tear gas," said Pedro Smith, 41, who has participated in the nightly protests. "This is totally different. Now we're being treated with respect."

Well, we need the leadership from "Dear Leader," too.

He could say "eff it" on angry black worries or whatever, and say:

"Dear Americans: While large parts of our population are largely past racial issues, I have been wrong in talking about a post-racial America."

OTOH, issues of race overlap with, but only partially, with issues of socioeconomic class.

On Ferguson: It's had a reputation, deserved, for problems like this, since I lived in St. Louis 20-30 years ago.

I'm kinda over with Obama, in case it wasn't obvious. There's not really anything he can say to influence this matter with the people who need to do the most changin'.

Good on Governor Nixon for moving to replace the FPD with state officers, however.

What Obama really needs to do (and of course never will), is take a week-long vacation with an all-black Secret Service detail, and an all-black U.S. Marshals contingent on standby, in scenic downtown Vidor, you know?

And right indeed on Nixon.

Would your preference instead be for the cops to stand back and let the riots and destruction continue until the outrage burns itself out?

And BTW -- Ferguson has been a pit since I lived in the St. Louis area 25 years ago. And I say that as a guy who from time to time shopped and ate in the community or went there to visit friends/colleague who lived there.

My preference has occurred.

@Greg ... and you say that like it was entirely the black people who moved out to Ferguson's fault.

On the other, you present a stereotypical black/white (no pun intended) solution. Per Perry, the real solution has happened.

Don't you wingnuts talk about "jackbooted thugs"? That's exactly what the original police were.

I made no assertion that "it was entirely the black people who moved out to Ferguson's fault." You might want to check your reading comprehension.

And as for police ready for riots that spring from marches by angry constituencies (and you will understand my use of that term in a moment), I have my own experience with that going back a few decades -- http://stories.illinoisstate.edu/magazine/illinois-state/features/oral-history-isus-beer-riot-30-years-later/