Nobody could have predicted this *snicker*. 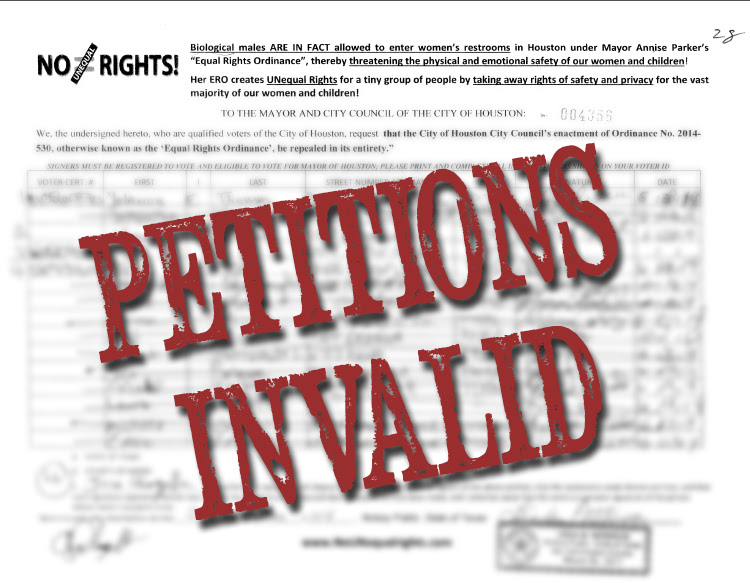 "With respect to the referendum petition filed to repeal the 'HERO' ordinance, there are simply too many documents with irregularities and problems to overlook," Feldman said. "The petition is simply invalid. There is no other conclusion."

Less than half of the more than 5,000 pages opponents submitted were valid, Feldman said, leaving the final valid tally at 15,249 signatures.


The 50,000 sigs the haters bragged about turning in fairly quickly became 35,000 upon cursory inspection, and when examined further it seems that many of the people who signed and collected signatures were neither Houston residents nor registered voters. Just over 15,000 made the cut, which was about 2,000 less than they needed.

Now that's just hilarious, I don't care who ya are.

The response from the haters was typical.

Dave Welch of the Houston Area Pastor Council helped lead the repeal petition effort. He pledged to fight the Parker's decision in court.


Welll, he's almost correct on that last part.  The petition's opponents completely disrespected the process of validly presenting their opposition, the process of democratically redressing one's grievances, and by extension, all Houstonians who are registered to vote.  Everybody that is legal, in other words.

So it gives me great pleasure to be able to scream in the faces of the illegals: "Get out of my city!"

Special acknowledgements go to Noel Freeman of the HGLBT and Brad Pritchett of Equal Rights Houston -- and several others -- for their efforts in mobilizing and coordinating the signature verification.  This is what political activism looks like, y'all.  And this is what the city's report, complete with images of the various pages of petitions, looks like.  There's legal action to come without a doubt, but nothing that can happen in time for this November.  Kind of a shame really, because I was expecting this vote to motivate liberals and progressives to turn out.

Social media blew up with the news, Wayne ran first, and TFN, Lone Star Q, Culturemap Houston, BOR, and Charles all have something additional on the development.

Back to your regularly scheduled outrages over nothing, conservatives.

Update: A consqueeracy?
Posted by PDiddie at Tuesday, August 05, 2014

When the petitions got posted last week, I went and looked at them. I noticed that almost every petitioner signed their own petition - and many had notarized the form with their own signature and their families' signatures.

This indicated that the petition effort hadn't spent any time training the petitioners on the rules.

Congratulations, Houston: We've entered, if not the 21st century, then at least the 20th.