A few more words about Bergdahl and his family

-- Our local cretin Burt Levine (yes, cretin) posted this on his Facebook page. 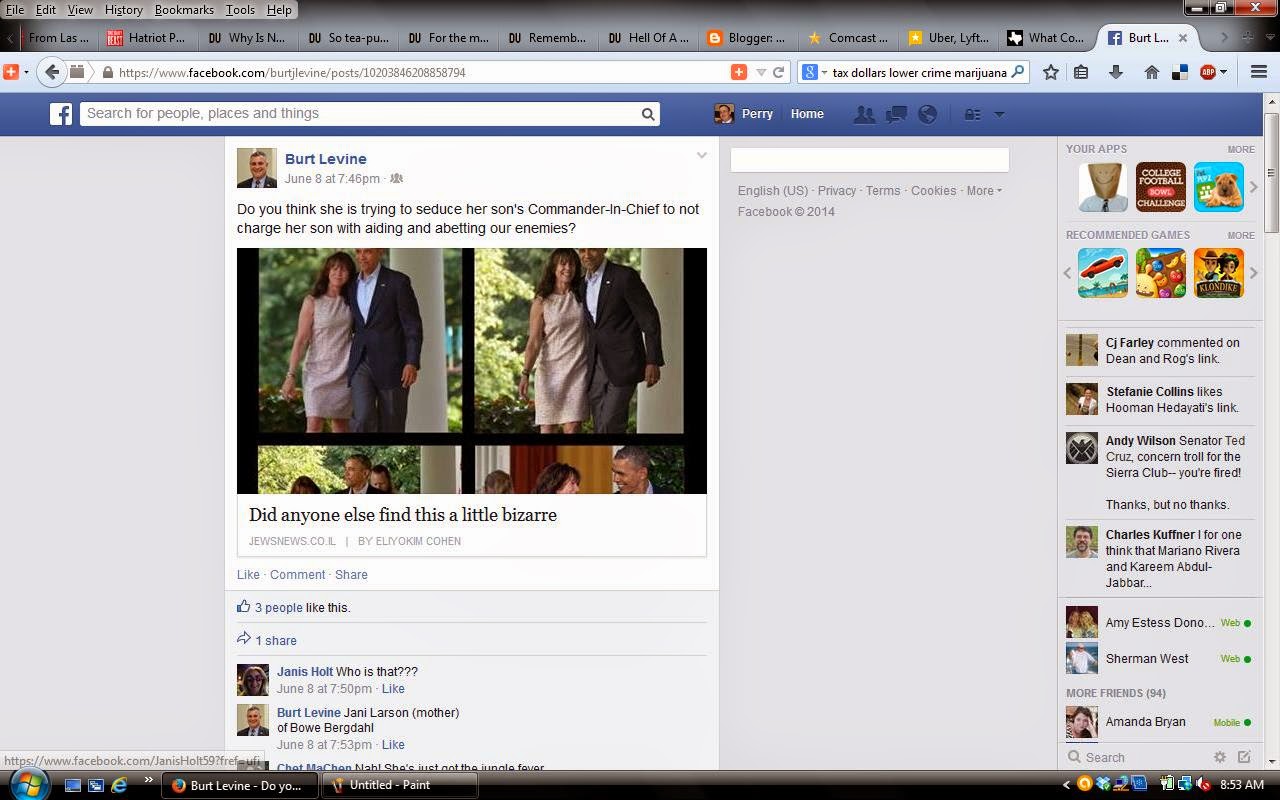 Never underestimate the depths to which conservatives can lower themselves.  Can they dive deeper into their own sewage than suggesting Bergdahl's mother is making sexual overtures to the president?  We would hope not, but the truth is they probably can.

Bob Bergdahl is a devout Presbyterian, not a Muslim; he self-taught himself Pashto and Urdu to better understand his son’s captors and the “world he could not escape;” he followed jihadis on Twitter to gain information; he researched Afghanistan to acquire information he didn’t have; along with his son, he questioned the war.  All of this has made Mr. Bergdahl an incomprehensible entity in this unfolding story. And as we have seen over the past many years, what the right doesn’t understand, what it can’t grasp, what eludes the very limited thinking it engages in, has to be something malodorous, something foreign, and therefore evil. Mr. Bergdahl, despite his deep religious beliefs, a strong commitment to his son, obvious intelligence and resourcefulness and patience – all positive attributes –  is not easily placed in one of the little boxes the right-wingers love to use. After all, if you’re unable to critically think, the only option left is to label.

As Sean Elder at Newsweek wrote of Mr. Bergdahl, “He wept, he suffered, but he persevered, and like any resourceful man, he tried to understand the nature and origin of the problem.”


-- Last, on the soldier/POW himself.

Republicans are so consumed by racial animus and rage that they have finally sunk to a level of attacking a white American soldier, a prisoner of war, as surrogate for Barack Obama. The conservative movement appeared to have sunk to the depths of depravity when they shutdown the government and tried to destroy the good faith and credit of the United States that was borne of racial hatred for this president. However, all their anti-American actions over the past five years pale in comparison to attacking a young man who volunteered to fight and die for his country, was held in captivity as a prisoner of war for five years, and escaped his captors twice, only to be the recipient of Republicans’ racial hatred for the president that negotiated his return home.

Racism is a vile cancer that has metastasized to such a level in the conservative movement that their animus extends to a white American soldier as surrogate for the black president who brought him home. Conservatives have indeed hit rock bottom.

This is where we are in the state of our political discourse today.  Conservatives will say any hideous thing they can think of to score a point with their side, and the rest of us are left with our mouths agape in disgust.

Update: A soft call for sanity from the right.
Posted by PDiddie at Tuesday, June 10, 2014

Absolutely correct. Conservatives believe they are engaged in a War. Not a real war overseas mind you they leave that to the poor and liberals but a war to control the American Government and ensure that the middle class is ground into dust and We, the People are shackled into unending Wage Slavery.