It's more of a disclosure problem. 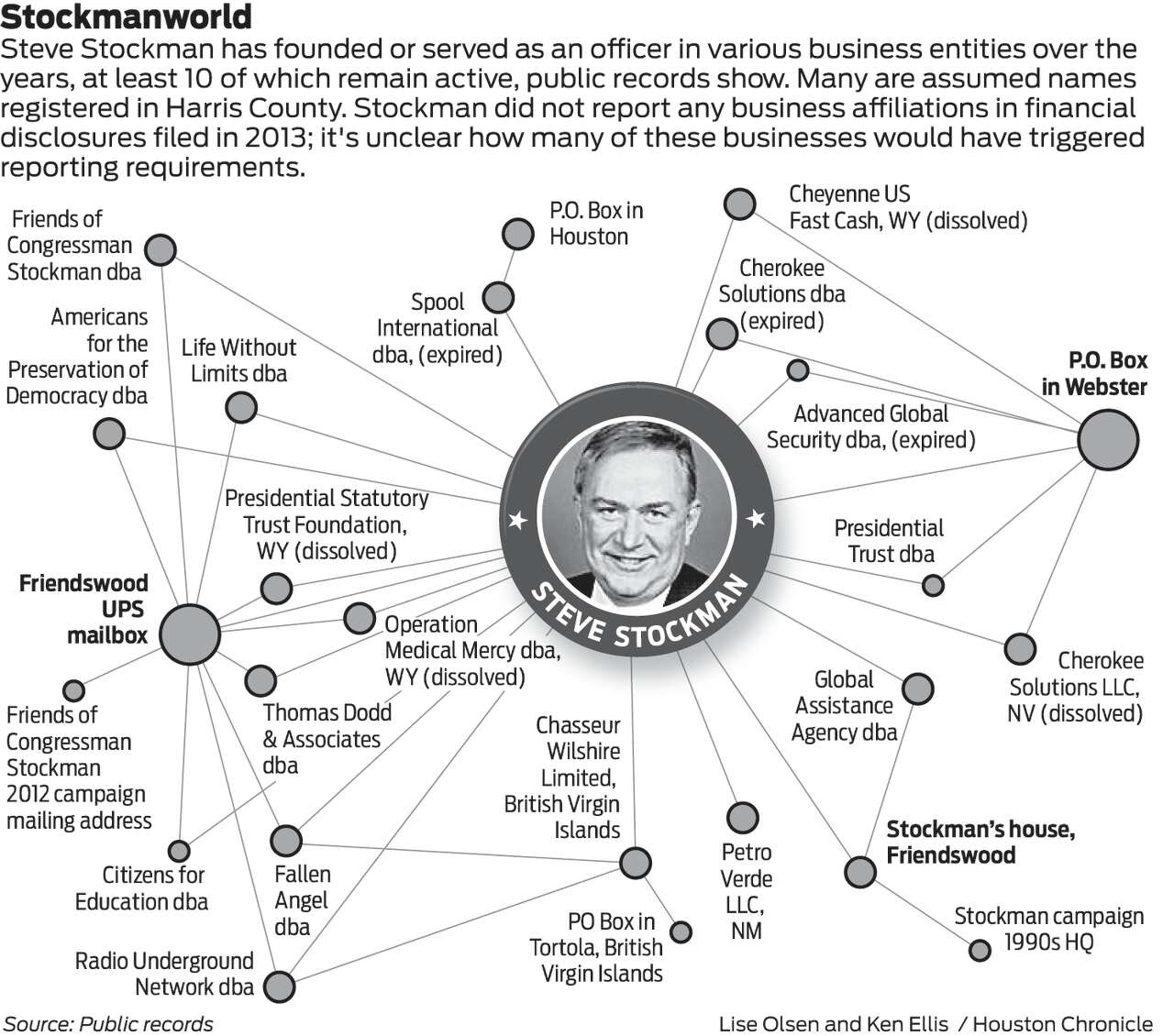 Both as a candidate and as a congressman, Rep. Steve Stockman of Clear Lake has failed to make federally required disclosures about business affiliations that stretch from Texas to the British Virgin Islands, and has provided no details about the business he claims as his sole source of income.

Stockman returned to office in 2013 after 16 years away from Congress - crediting a low-budget, come-from-behind campaign to which he claimed to have lent more than $100,000 of his own money.

Stockman failed to file a federal disclosure form during his candidacy in 2012 when he ran for the newly created District 36, which stretches east and north from Southeast Harris County, around Beaumont, and beyond to the Louisiana line.

Every other Texan in Congress, whether incumbent or freshman, filed a report in 2012.

The headquarters had been housed since early 2012 in a former motorcycle shop along the Gulf Freeway. Campaign staffers and volunteers had been both working and sleeping there, even though the commercial building was considered unsafe for human habitation, according to Webster city records and an interview with assistant fire marshal Warren Chappell.

Officials found 14 fire code violations and ordered the office closed and its electricity shut off on Nov. 7, fire department records show. No one had obtained the necessary permit for the campaign to legally occupy the pale yellow two-story metal building along a feeder road on the freeway, wedged between a spa dealership and a strip mall, building department records show.


But he does have actual money problems, too.  The Chron had prior articles that detailed Stockman's perpetual campaign finance woes.

Rep. Steve Stockman has fired two congressional staffers after disclosures that both made prohibited contributions to his campaign.

The incident is the latest in a string of controversial episodes that have dogged Stockman's political campaigns over the past two decades.

The Clear Lake Repub­lican's campaign for Congress in Texas' 36th District has been notified of potential problems with its campaign finance filings in 2012 and 2013 approximately a dozen times, including apparently misreported donations, late or missing filings of required reports, and inaccuracies in certain filings.

Both this year and in the 1990s, his campaigns were investigated for issues relating to campaign materials made to look like newspapers. While the earlier complaints resulted in a settlement with the Federal Election Commission and a civil penalty, the most recent complaint was dismissed without enforcement action, the FEC announced Friday.

Stockman spokesman Donny Ferguson told the Chronicle Thursday that staffers Jason Posey and Thomas Dodd had been terminated. Posey had worked with Stockman since the mid-1990s, and was his 2013 campaign treasurer.


Stockman has never been anything but a goon and a goofball, and that goes all the way back to when he unseated Jack Brooks in 1994.  But the good folks of East Texas chose to 're-elect' him, as his 2012 campaign signs urged... and who is to argue with the will of the people?  Even if he hadn't ever represented much of the newly-drawn 36th Congressional District -- and even granting that this is, you know, the Appalachia of the Lone Star State -- they knew what they were getting.

Before the "librul media" whining gets too loud, those who vote in the 36th's Republican primary will need to come to some measure of good sense and stop repeating this mistake.  It's not like Stockman is a coke addict or anything -- as I wrote before, there's good dope and there's bad dopes -- but if this buffoon gets re-elected in 2014, then they own him... and every shitty thing that he does and is.

Hard to imagine East Texas lowering its reputation any further, but it is certainly possible.

Update: Gator in The Bayou wishes Stockman a happy birthday.
Posted by PDiddie at Sunday, November 24, 2013

It's just too freakin' hard for some people (like Steve Stockman) for instance, to learn the damned rules, and follow the damned things.

It's just much easier to take money from people, and put it... anywhere, (mostly ... out of state, obviously) than it is to do what most people who run for, and are elected to office do..... which is follow the damned law.