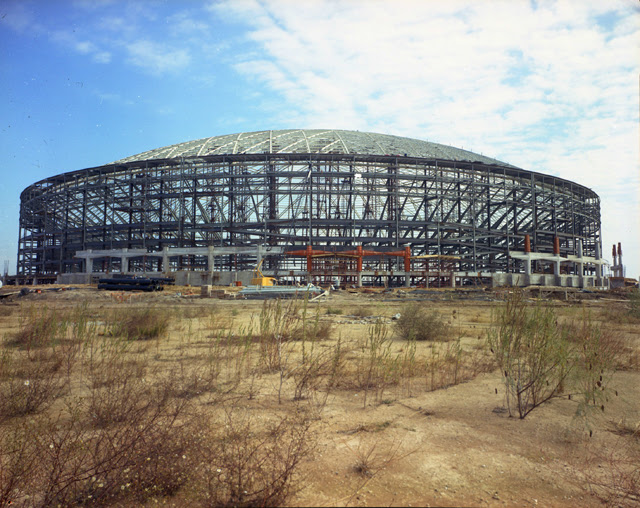 The county's voters rejected public debt to fund the proposed convention facility last Tuesday; that was not to be interpreted as "tear down the Dome".

The Houston Astrodome's obituary may have been written when voters rejected a $217 million bond proposal to renovate it, but some Harris County commissioners who will decide its ultimate fate said Wednesday it's possible that burial for the city's landmark structure is still some time away, if it comes at all.

"It's anybody's guess now," Steve Radack, one of the five members of the Harris County Commissioners Court, said.

And a quick decision or start to the demolition of the world's first air-conditioned domed stadium, dubbed the "Eighth Wonder of the World"?

"We will wait to see what the consensus of Commissioners Court is before we decide what to do with the Dome," another commissioner, El Franco Lee, said.


For those of us who want to see the old girl live on, Commissioner Radack has assumed the role of Astrodome protaganist.

Studies in recent years have estimated that the cost of demolishing the Astrodome to be as much as $78 million. Radack said he understood it would cost about $20 million to fill the hole left behind.

"I think the Dome has served its purpose, but I'll say this: I'm not going to support tearing it down and then covering the hole with $20 million in dirt and a parking lot," he said. "If that's all, it can just stand there."


It doesn't have to do that, either.  It can be a revenue-generating public facility and remain an iconic symbol of Houston's past... and future.  My request of the Harris County Commissioners Court is to please consider again the Ryan Slattery (UH architecture student) option.

The Rodeo and the Texans want parking; the Dome sits over a 35-foot-deep hole in the ground with a 9-acre footprint.  There's your parking garage, and it can be two levels.  Eighteen acres' worth of underground parking.  Put a floor down over that (a roof for the garage) and then strip the Dome to its skeleton -- a Texas version of the Eiffel Tower -- and repurpose it as a semi-open air park.

(It probably can't have a crater with a lake and trees as seen here, but it can be nine acres of green space with grass, shallow-rooted indirect sunlight-flourishing shrubbery, pavilions, playgrounds, walking paths, concessions, etc.)

A park like this instantly becomes the crown jewel of the city.  An actual tourist destination for people from around the world ... just like the Eiffel Tower.  A selling point for the Olympics.  Perhaps most importantly of all, a bold symbol of a world-class city that pays tribute to its heritage and shines as brightly as its future.

Let the Rodeo and the Texans collect the fees for the subterranean parking -- your car stays cool in the summer! -- with half of the money collected paying back the taxpayers for the deconstruction and revitalization expenses until the (yes, public) debt is settled.  After that, those greedy bastards can keep it all.

It's the best way -- as far as I can see the only way -- that everybody can get what they want.

This is the plan, commissioners.  Make it happen.
Posted by PDiddie at Thursday, November 07, 2013

You and I are in full agreement here -- nice to have that happen once in a while.