Texas Lt. Gov. David Dewhurst personally called police and asked to talk to the highest-ranking officer about getting a relative out of jail, Allen police said.

He also asked for the cellphone numbers of a judge and the Collin County sheriff, which a sergeant declined to give him.

The relative, Ellen Bevers, an Allen elementary school teacher, was jailed on charges of shoplifting at a Kroger’s grocery store on Aug. 3, police said.

Police released an audio recording of the phone call late Wednesday after a request from NBC DFW under the Texas open records law.

Go to the link above and listen for yourself.

"What I would like to do, if you would explain it to me, sergeant, what I need to do is to arrange for getting her out of jail this evening and you can proceed with whatever you think is proper," Dewhurst said on the call.

In the call, Dewhurst described Bevers as his sister-in-law but police said the woman was married to Dewhurst's nephew. In a short statement later Wednesday, Dewhurst referred to her as his niece.

Dewhurst said he had known Bevers for 30 years and described her as "the sweetest woman in the world."

He's known her for 30 years, but he's still confused about how he's related to her (by marriage). You would think he could've at least gotten that straight before he placed the call.

"The fact that David Dewhurst believes he and his family are above the law is the height of arrogance and recklessness," Patrick said. "This blatant abuse of power would be stunning coming from any elected official.  However, it is particularly disturbing coming from the Lieutenant Governor of Texas.”


Yes, even a blind state senator/talk radio host can find an acorn once in awhile.

I was fairly confident that with the three right-wing freaks running against him in the primary, Dew could still find enough of the so-called moderates to lift him into the runoff. Not any longer.

Place your bets on Dan "Pussycats" Patrick versus Jerry "Gunhole" Patterson, ladies and gentlemen, because Todd Staples' Tweets, though entertaining, aren't going to be enough to get him any higher than third. 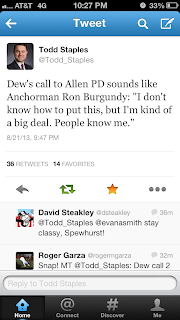 See, I think Patrick's abrasivenes will eventually piss off enough fellow wingnuts that he won't be the primary competition.

So I may be biased, but these wingnuts in Houston worship the guy. Since his radio program also airs in Dallas, I suspect he's got another committed following up there. He (and Patterson) have way more street cred than does Staples.

I think Patrick comes in first in that scrum with something like 30%. And I think he's even money to be the nominee.

Oh, you could be right. I was just thinking that Staples has a state office that puts his name in fromt of rural white voters. (What he does with that, and how well, is another story.)

And on Patrick, it's not like he has a past history of meltdowns, including with some of his own type, right? :)

Anyway, Patterson's got the stealthy campaign to pick up the pieces after Patrick finishes going attack dog.

Now, if Abbott only had a better primarier than Pauken. I mean, he's got some inside-GOP vulnerabilities, but Pauken's never been an elected official, and his past attempts show why.