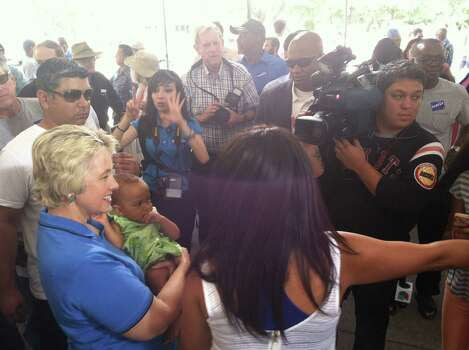 (Mayor Annise) Parker greeted, hugged and chatted with many of the more than 100 supporters and volunteers who gathered under the shade of a white tent swollen with the sounds of 1980s dance hits, clicking cameras and intermittent cheers. The mayor even put down a few moves between photos and handshakes.

Former City Attorney Ben Hall has announced his intent to oppose her, but Parker dismissed his campaign at the event.

"I've been asked if I have an opponent," Parker said, members of the crowd yelling back, "No."

"I have an opponent, but I don't have competition," she said to louder cheers.


Just as it was in March, that is precisely where things stand with six months to go before election day. That's also what the polling reflects (such as it is). Update, 5/15: The conserva-freaks circulated that link around and turned the tables on the mayor, and that was after she sent out a blast e-mail asking her supporters to vote. Ya gotta hate it when that happens.

Ben Hall's Gene Locke strategy is still in a holding pattern somewhere over IAH, and Don Cook is ... well, garnering the same amount of attention he traditionally has.

If the mayor only comes in for criticism as harsh as this, then it's going to be smooth sailing for her. The race to replace Helena Brown and the council seats being vacated due to term limits will be more competitive (and interesting). Charles also has a similar take on yesterday's pep rally.

Update: Worthy of note is that a perennial Green candidate for mayor in a large Texas city finished second -- with 13% of the vote and ahead of four others -- to a very popular Democratic incumbent just yesterday. Mr. Cook would exceed conventional expectations if he did half as well.
Posted by PDiddie at Sunday, May 12, 2013

Rhett Smith is certainly a perennial candidate, but he ran as a Dem for CD21 in 2004, in the GOP primary for Governor in 2006, and again as a Democrat for US Senate in 2008. Project VoteSmart says he ran for CD20 in 2010 (http://votesmart.org/candidate/biography/50059/rhett-smith#.UY-lT7XCZ8E) but I can't find any election results for him in the general or primaries, so who knows. My guess is that he was simply the most widely-known "not Castro" candidate.

He's certainly had more blog coverage in the past couple of years (at the very least).

Twould be nice to see real Greens running in Texas' major cities. With strong LGBT presence in Dallas, I'd think that would be prime ground for such a candidate.

Austin could probably use an Green candidate just to shake up Dems.