Nick Anderson, killing it as usual. 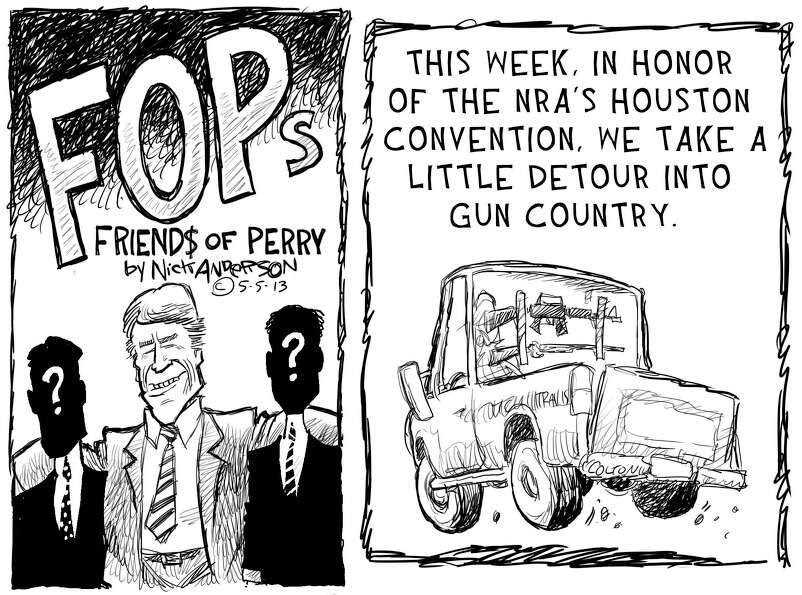 This is a national story now. Bill Maher also smacks 'em down: "The Axis of Assholes".

Bill Maher coined the perfect term. Rick Perry, Ted Nugent, and Sarah Palin are the axis of a**holes. From bashing charity events because they weren’t invited, to running campaign ads suggesting that Obama isn’t a Christian then cozying up to the president after your lack of regulatory oversight causes one of your towns to blow up, to blaming Obama for veterans’ suicides when you were a coward who refused to serve your country, these three are a**holes. In fact, they are three of the biggest a-holes in American politics.


At Ground Zero, there were conversations described as civil and spirited.

"How many of your members supported universal background checks?" asked Aaron Black, an activist who flew in from New York to protest. He cited polls showing the number as high as 92%.

"You have not told me three times," Black said.

"It's a bogus number," Rathner said. "If you explain to people that universal background checks require registration, that number would plummet."

"What endgame do you see?" asked Jeff Hunter of Houston. "Is the NRA going to form militias when the government comes to get your guns?"

"If there's no registration, we don't have to worry about it," Rathner said.

He tried to confront Rathner with autopsy photos of 16-year-old Brishell Jeffries, one of three teenagers killed in a drive-by shooting in Washington, D.C., in 2010. "Gun violence is so sterilized, and dumbed down and Disneyfied, that no one cares. It didn't even faze this guy."

Rathner acknowledged a problem with violence in America, but said he doesn't blame the guns. Protesters, he said, have been misinformed by the media.


I'm so old that I remember when protests at Houston NRA conventions were all about Tom DeLay.

Thanks for coming, gun nuts, and we hope you spent a lot of money while you were here. Now GTFO and make room for the OTC. (Was it just a year ago that the big story was the Chronicle's un-coverage of the oil and gas confab?)

I tried to "borrow" it, in picture form, and couldn't make it show up on my FB page. YellowdogGranny, out in West has a "cartoon panel" which I' m going to try to remember all four of the "problems" we have.
1. If a kid shoots a lot of kids in a school with an automatic rifle, we (the country) has a "mental health problem".
2. If a child kills another child with an accessible gun, the country has a "personal responsibility" problem.
3. If crooks, and robbers use guns to do their dirty deeds, the country has "a crime problem".
4. If idiot kids, after setting off bombs at a marathon, kill a police officer, the country has "a national security problem".

What we never can acknowledge is what we have: which is a "gun" problem.

You can visit the granny, and see the whole thing.