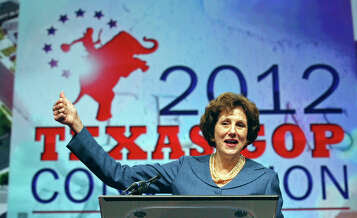 -- Texas comptroller Susan Combs, seeking any tactical advantage her overly-long arms can reach in her stealth bid for lieutenant governor in 2014, is going after Julian Castro and Annise Parker simultaneously via the bond issues on the respective local ballots.

"As taxpayers step into a voting booth to approve new debt, government should tell them how much debt they are already responsible for repaying and how much debt service is included," Combs said in a statement. "Elected officials are responsible for telling the taxpayers they serve about the price tag associated with new and existing debt."

Critics of Combs' report were quick to assert that local governments have been forced to take on essential projects the state has refused to fund.


Yes, it's those pesky unfunded mandates again, especially when it comes to the state constitutionally-mandated public education budgets. Muse did some of the best writing on this, but she has walled off her blog these days and I am not invited. (You, however, may be. Give this post by Big Jolly a click and try the links he has to see.) More from the TexTrib as to how the Lege tried to work around that in the last legislative session. Expect more James White-styled exemptions in the coming one.

The most laughable hypocrisy from "Stretch" was this:

Combs acknowledged that "there is plenty of good debt" that voters approve to help finance highway and water-related projects, for example. Still, she charged that too many governmental bodies are piling up debt without regard to its impact on future generations of Texans. "Have they done all their due diligence? Have they tried as hard as they know how to be strategic, to be careful?"


The first part defeats her purpose of dog-whistling to the Tea Party. The last part is just comical coming from the person who left your Social Security number posted online for a year. Like Mitt Romney, she just cannot pull off a freak-right pander. 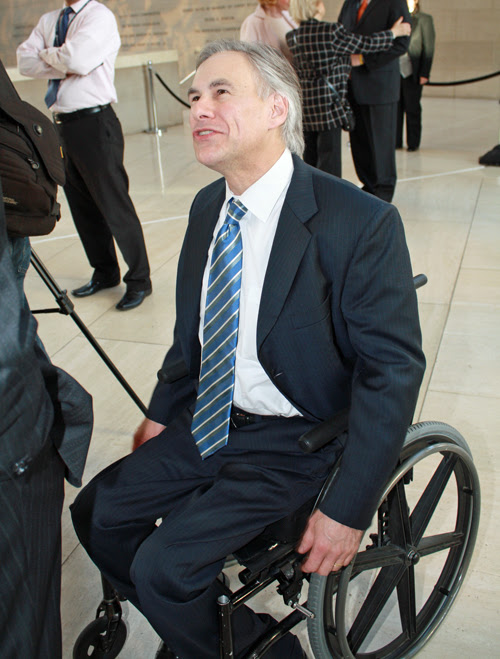 -- Greg Abbott wheeled himself into the Kountze cheerleader/prayer banner fray this week.

Kountze Superintendent Kevin Weldon initially banned the signs after the Freedom From Religion Foundation complained. But a judge ordered that the banners continue to be allowed until a court hearing can be held next month.

In a letter to Weldon, Abbott said he was on solid legal ground by allowing the signs. He said his office was prepared to file a brief on the cheerleaders' behalf if the Freedom From Religion Foundation sued.

The conservative Liberty Institute already is defending the cheerleaders, arguing that banning religious speech on student-made signs is discriminatory.


The Khronically Konservative Kommenters get it right on this one (see the bottom of the link). This is just one more legal case Abbott is bound to lose if the fight is joined.

Update: This is perfect.

-- Robert Miller, the GOP version of the Burnt Orange Report, suddenly noticed there were two other political parties on the ballot.

In Texas, the polling is beginning to show an uptick for Democratic legislative candidates.  We are also seeing the Libertarians poll strongly in Texas this cycle.  Normally, a Libertarian candidate will pull 2% to 3% of the vote in a competitive race between a Republican and a Democrat.

In 2012, we are seeing the Libertarians in the 3% to 5%+ range. Every cycle, there are a handful of races where the Libertarian candidate receives more votes than the margin of victory for the Democrat over the Republican.


He's got some fun spreadsheets, but can't come up with the names of the Libertarians and Greens running. Just 'yes' or 'no'.  He even got that wrong in HD-102; there is a Green, Michael Joseph Spanos, contending against Republican incumbent double-token Stefani Carter and Democrat Rich Hancock. She surfed into office on the 2010 Red Tea Tide, but may be more vulnerable in an Obama low-to-medium blue wave. Miller does has some good stuff, though...


Libertarians in the Austin area generally run stronger than any other area of the state, and this could be problematic for (Jason) Isaac and (Tony) Dale.  The Libertarian in HD 144 further strengthens Mary Ann Perez’ position.  However, the lack of Libertarians in the DFW house races and SD 10 is a significant benefit for the Republicans.  Finally, the Green candidate could provide the margin of victory for Harper-Brown in a close race, presuming all of the Green vote would otherwise be Democratic. A Green candidate can be expected to receive about 1% of the vote in a legislative race.
Although there are not that many competitive legislative races in Texas this year, the presence or absence of a Libertarian on the ballot is likely to have a major impact on the end result.


We're all hoping for a bit more influence than what Robert expects. Everybody except red and blue partisans, that is.
Posted by PDiddie at Friday, September 28, 2012