Thanks to Mediaite for that.

Former President Bill Clinton injected some of his gigawatt political star power into President Obama‘s reelection effort Wednesday night with a rousing speech to the Democratic National Convention, capped off by a last-minute appearance onstage by the incumbent nominee himself. With his trademark wit and charm, and his hard-won statesmanlike gravity, President Clinton made President Obama’s case for reelection persuasively and convincingly.


You can go on and read all that if you didn't watch. There's also video. Let's get this over with, though, for the sake of sensitivity to the other side.

What The Big Dog is, is a closer.

He's better at it than the best car salesman on Planet Earth. Better than Alec Baldwin in Glengarry Glen Ross. "Second prize is a set of steak knives."

Bill Clinton, the guy that The Most Interesting Man in the World is modeled after, has tapped so much ass -- scattered liberally across seven continents; yes, even Antarctica -- that most conservatives can't even count that high. He puts Wilt Chamberlain to absolute shame. Check this out from the Onion.

During his speech Wednesday evening at the Democratic National Convention in downtown Charlotte, former U.S. president Bill Clinton finally just unzipped his fly and showed the entire country his penis.

“So should we just get this over with then?” the president asked the 20,000-member audience, as well as millions watching the nationwide telecast. “Should I show you my penis?”

Immediately after Clinton asked this question, there was reportedly a brief pause, after which a few murmured consents of approval were audible in the crowd, as well as a number of voices clearly shouting “okay” and “sure.”

Sources said the sounds of convention attendees shifting in their seats could then be heard as the president stepped forward to the end of the stage.

“Okay, I’m going to show you my penis now,” said the former president, his hand reaching for his pants zipper as a dead quiet fell over the arena. “Wow. You know, it’s funny, now that it’s finally happening, I actually feel a little nervous. I think it’s good that I’m doing it, but still… Okay, here goes.”


And THAT's how the cow eats the cabbage. Any questions?

Clinton fixed the first Bush economy trainwreck and still found time for a handful of chippies on the side. Obama, of course, still has both hands full with a much bigger mess.

See, this is all you need to remember: Republicans fall in line, but Democrats have to fall in love. 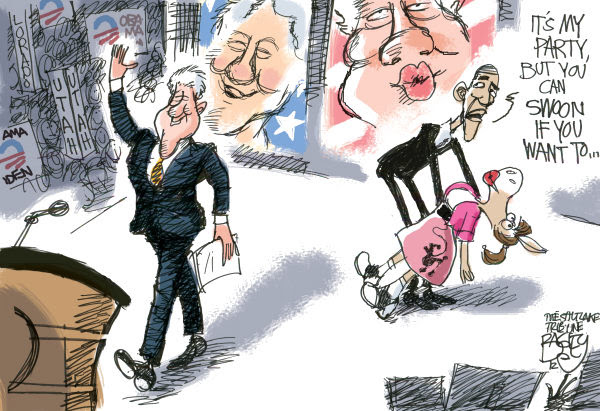 Yeah, they're swooning in Charlotte, the headliner is tonight, and it all spells blue wave disaster for the Bloods. Nancy Pelosi's slip of confidence is showing.

Good luck in 2016, GOP. Take comfort in the fact that this doesn't dent the status quo in Texas all that much.
Posted by PDiddie at Thursday, September 06, 2012