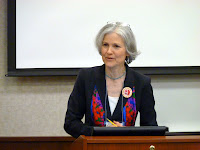 Details are still developing, but the schedule at this time is Houston -- specifically  the University of Houston in the afternoon and Lone Star College in Kingwood in the evening -- Thursday October 4th, Austin on Friday the 5th, San Antonio on Saturday the 6th, and back in Houston on Sunday October 7th for a big fundraiser in the afternoon.

Stein is headed to Texas from Denver, the site of next Wednesday's Obama-Romney debate.

As President Barack Obama and Republican nominee Mitt Romney square off in the first presidential debate in Denver on October 3, Democracy Now! will broadcast live from Denver with a special expanded presidential debate from 7:30 to 10:30 p.m. CT. We will air the debate, pausing after questions to include equal time responses from two presidential contenders who were shut out of the official debate: Jill Stein of the Green Party and Rocky Anderson of the Justice Party.


Anderson did not qualify for the ballot in Texas.

More as it is known. Media wishing to interview Stein should e-mail Media@JillStein.org . Here is the Jill Stein for President website.

Update: Stein will speak at the Student Conference Center at Lone Star College, 20000 Kingwood Drive, at 7 p.m. next Thursday, October 4.
Posted by PDiddie at Friday, September 28, 2012

Cool. I shall be there.

Thanks for the info!