After Mayor Parker announced her support last week of a resolution (signed by more than 70 other mayors across the USA) supporting same-sex marriage, the pastor of a Houston megachurch was quick to condemn. 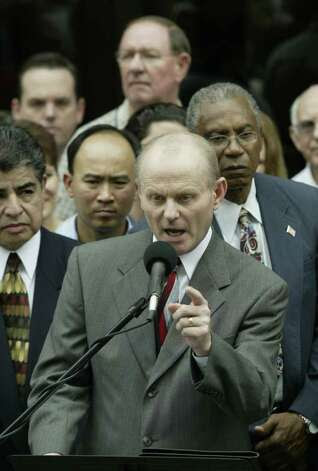 Pastor Steve Riggle of Grace Community Church, site of next month's county Republican Party convention, sent a letter to Parker late last month calling for her to resign if she will not stand down on gay marriage. He spent nearly an hour Sunday expounding on his feelings during his 10 a.m. sermon to roughly 3,000 congregants.

"Respectfully, if you cannot uphold the Texas Constitution, then you should do the honorable thing and step down," Riggle told his congregation, who responded with the first of numerous ovations.

"When you speak for us as the mayor of Houston, when the people of Houston have overwhelmingly expressed their will and you speak about this issue without their expressed will, I do have a problem with that," he continued.

Pastor Riggle, with
minority representatives
all behind him in the shot
Let's get caught up here if you're unfamiliar.

Mayor Annise Parker's determination to be known as a competent leader who happens to be lesbian is being challenged by political opponents promulgating the idea that she's becoming a gay activist to the detriment of the city.

In the first two months of her second term, Parker helped deliver a call by mayors nationwide for the legalization of same-sex marriage, proclaimed Valentine's Day as Freedom to Marry Day in Houston and said on cable radio that President Barack Obama needs to "evolve" toward support of marriage equality.

Emboldened by Parker's poor showing in November in which she barely avoided a runoff and by the victories by two opponents of gay marriage who became the first challengers to unseat City Council incumbents in 12 years, social conservatives have gone on the attack. They accuse Parker of reneging on a campaign promise to put the city first and social issues advocacy second, and they charge her with violating the Texas Constitution by advocating for a change to it.

Even the Houston Chronicle's cadre of mostly conservative commenters has gone on the offensive, demanding that Graceless Community Church give up its tax-exempt status. All of them, I presume, from the local drainage assessment to federal taxes on their income. For most of those folks it seems to be less about the US Constitution's First Amendment or DOMA and more about separation of church and state... which, some are quick to point out, isn't actually in the Constitution. I wonder if they will feel more strongly, or less, when they learn that the church is hosting the 2012 Harris County Republican Party convention. (Even though that information is in the lead graf, the CCC* -- or KKK, as I have commonly referred to them -- typically don't read the articles in the paper, they just knee-jerk a reaction to the headline in the comment box.)

Pastor Riggle wants Mayor Parker to either shut up about gay marriage or resign her office. That's an unreasonable demand. As Charles has noted, everybody has the right to voice their opinion, especially when it is both a legal minority and a moral imperative.

Pastor Riggle is just ginning up extra outrage among the TaliBaptists -- as if any more were possible or even needed -- to turn out the vote for Republicans in '12. Like the rest of the ultra-conservative flock, he misses the fact that these Christian jihads against gay marriage, abortion, and more recently contraception have the same mobilizing effect on his opposition.

I have evolved to be no great fan of Mayor Parker's for a variety of reasons, but this sort of thing will always bring me to her defense. Parker's style and policies associated with governing are separate from her support of any cause she chooses; as separate as the one between church and state ought to be. For his part, Riggle is just following the lead of Rick Warren and James Dobson and Richard Land and Tony Perkins, who followed Pat Robertson and the late Jerry Falwell before them, in a long-con game. Keep the sheep nervous, before and after the shearing.

Remarkably, many non-social conservatives are jumping that fence now.

Thanks Perry for bringing this to our attention... not just about the situation in response to Mayor Parker, but I have long wondered about these "churches" maintaining their tax-exempt status.

I've been thinking that it may be well worth starting a new "church" to support more progressive-leaning politics just to establish a more fair and balanced quid pro quo....