... here's a summary of things I'm reading that have nothing to do with Texas politics.

-- Obama to Israel, Iran: "As president of the United States, I don't bluff".

At the White House on Monday, President Obama will seek to persuade the Israeli prime minister, Benjamin Netanyahu, to postpone whatever plans he may have to bomb Iran's nuclear facilities in the coming months. Obama will argue that under his leadership, the United States "has Israel's back," and that he will order the U.S. military to destroy Iran's nuclear program if economic sanctions fail to compel Tehran to shelve its nuclear ambitions.

-- 'Man sues Google over Street View urination photo, says it has made him a laughingstock.' And if you haven't seen the compilations of some of these street-view photos, here's a good one. Just don't be eating or drinking anything when you click over or else you'll need a new computer.

-- Obama waives rule allowing indefinite military detention of Americans. This would be in regard to the fairly nefarious NDAA legislation he signed last year. Money graf:

Advocates for liberties will likely find the new rules for implementing reassuring, at least while President Obama is in office. But one of their big complaints with his signing of the law is that his policies only last so long as he is in office, and they will likely step up attempts to repeal it.

-- 25 people who Tweeted that Obama had Breitbart assassinated. This is pretty much all I will have to say on this topic.

-- 'Silence Gun: Strange weapon of the future immediately quiets you, whether you like it or not'. Between this thing and this law, the era of the public protest is drawing to a close. 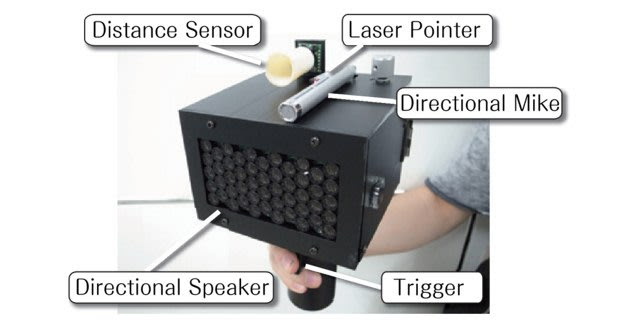 The gun operates based on the concept of delayed auditory feedback. An attached microphone picks up the sound being made by the target and plays it back 0.2 seconds later. The effect is incredibly confusing to the human brain, making it all but impossible to talk or hold a conversation. The device doesn't cause the person it's being used on any physical harm — it simply messes with their head.

When the human brain hears its own speech perfectly in sync during normal speech, it easily processes the input and allows you to largely ignore the sound of your own voice. However, by offsetting the response just a bit, the brain hears your mouth speaking as well as the strange echo effect produced by the gun. This unusual combination is confusing enough to effectively shut down the part of your brain responsible for managing speech, and you fall immediately silent.

-- Speaking of guns, the Texas Department of Public Safety now has its own navy: six speedboats with multiple machine guns each patrolling the Rio Grande. 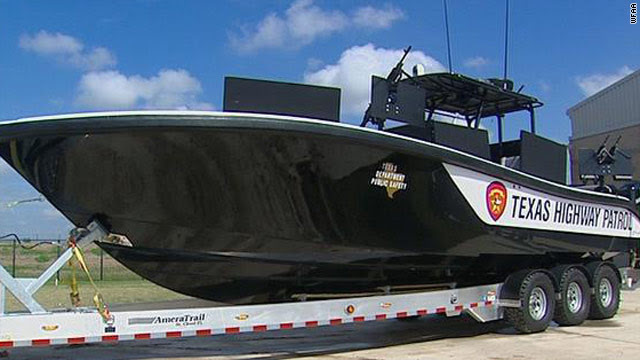 The 34-foot-long boats, each powered by three, 300-horsepower outboard engines, will have bulletproof plating and six machine guns apiece, not unlike the river patrol boats the U.S. Navy used during the Vietnam War.

The Lewsiville Texan Journal has video. The Texas Observer observes...

So is DPS going to start blazing away at women and children crossing illegally on inner tubes? Do they need six machine guns to nail some dope smugglers crossing kilos of marijuana? Also, the area of Falcon Lake where (DPS trooper) David Hartley was allegedly killed was on the Mexican side of the lake. DPS can't patrol in Mexico.

Ah, but who cares -- have you seen the bad-ass machine guns?

-- Our oceans are acidifying rapidly.

The world's oceans are turning acidic at what could be the fastest pace of any time in the past 300 million years, even more rapidly than during a monster emission of planet-warming carbon 56 million years ago, scientists said on Thursday.

Quickly acidifying seawater eats away at coral reefs, which provide habitat for other animals and plants, and makes it harder for mussels and oysters to form protective shells. It can also interfere with small organisms that feed commercial fish like salmon.

The phenomenon has been a top concern of Jane Lubchenco, the head of the U.S. National Oceanic and Atmospheric Administration, who has conducted demonstrations about acidification during hearings in the U.S. Congress.

Oceans get more acidic when more carbon gets into the atmosphere. In pre-industrial times, that occurred periodically in natural pulses of carbon that also pushed up global temperatures, the scientists wrote.

Damn those elitist snob scientists and their gloom-and-doom. Let's just pretend it's not happening.

-- Speaking of oceans, seventy years ago the USS Houston went to a watery grave in the Pacific after being shelled by a Japanese fleet near Jakarta, Indonesia. Two of its surviving sailors, now in their 90's, were in Houston yesterday to commemorate the anniversary. Both men survived not only the sinking but also three years in Japanese internment, where they participated in constructing the actual "Bridge on the River Kwai".