We are all Santorum's children now

Not talking about his poor little sick infant daughter. 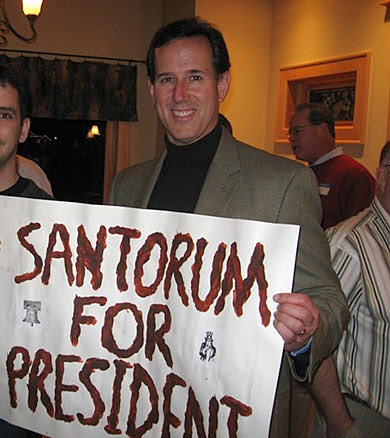 No delegates were at stake on Tuesday night, but Rick Santorum still scored three important -- and surprisingly large -- victories in the race for the Republican presidential nomination by winning caucuses in Colorado and Minnesota and a primary in Missouri.

"Conservatism is alive and well in Missouri and Minnesota," Santorum said when he took the stage, before the Colorado results had been announced, at his victory party in St. Charles, Mo. He called his wins "a victory for the voices of our party, conservatives and tea party people, who are out there every day in the vineyards."

It's a victory also for every man and woman who opposes not just a woman's right to choose but also a woman's right to choose contraception. (Sidebar: on the same day that the head of Catholic Charities of Galveston-Houston finally resigned over the latest child molestation scandal, you have to wonder if any of those pedophile priests would have been excoriated had they used a condom.)

For the moment, contemplate Rick Santorum's conservatism and his -- and his church's -- interpretations of heterosexuality and family planning, and what their effects may ultimately be.

The absurdity of the fundamentalists' increasingly conservative position on women's rights was illustrated recently in, of all places, the Oklahoma state Senate, where one of the lonely Democrats there introduced an amendment to a fetal personhood bill that was straight out of Monthy Python.

The concept of “personhood” defines human life as beginning at the moment of conception and, in the case of Oklahoma’s pending Senate Bill 1433, says that the resulting fetus “at every stage of development (has) all the rights, privileges, and immunities available to other persons, citizens, and residents of this state.” If Senate Bill 1433 were to become law, all forms of abortion and some forms of contraception would be considered murder and therefore illegal.

Sen. (Constance) Johnson, who represents Oklahoma’s 48th District introduced an amendment to the bill mandating that the same rights and benefits be granted to spermatozoa, writing: “However, any action in which a man ejaculates or otherwise deposits semen anywhere but in a woman’s vagina shall be interpreted and construed as an action against an unborn child.”

A second legislator, Democrat Jim Wilson attempted to introduce an amendment stating that all men would be responsible for the full support and well-being of any woman carrying their child for the duration of the pregnancy, including housing, food, transportation, and all medical costs. The amendment failed.

Behold; The Meaning of Life.

I am taking a fairly tangential digression from the news of Rick Santorum's electoral wins last night -- delegate-less though they may be -- in order not to miss the point about what his, ah, resurgence (and the corresponding political fortunes of American conservative Catholics, and of American religious extremists of all faiths) means for women specifically, and all the rest of us generally.

Ultimately Santorum will fall back and give way again to Mitt Romney. He's only slightly less likely to get the nomination than Newt Gingrich, slightly more so than Ron Paul. But his bloc of Christian Soldiers will, as a result of these caucus pluralities, have significant influence in the party platform and at the national convention, and his 18th-century Opus Dei-styled opinions will continue to get a public airing. They will also exert the occasional gravitational pull on Romney. Even Ann Coulter, formerly a doomsdayer on a Romney candidacy, is busily jamming Mitt to starboard.

Center-right and far-out right are shaping up as the duopoly options in 2012.

Update: A reminder to my Catholic friends; it's not you, it's your church and its leadership.
Posted by PDiddie at Wednesday, February 08, 2012