Try to keep focused on the fact that it's not the homosexuality, it's the hypocrisy.

Here's how the story broke in Arizona last Thursday:

Pinal County Sheriff Paul Babeu — who became the face of Arizona border security nationally after he started stridently opposing illegal immigration — threatened his Mexican ex-lover with deportation when the man refused to promise never to disclose their years-long relationship, the former boyfriend and his lawyer tell New Times.

The latest of the alleged threats were made through Babeu's personal attorney, who's also running the sheriff's campaign for Congress in District 4, the ex-lover says.

Babeu, obviously of French descent, was not just forced out of the closet but also his post as Arizona state co-chair of the Mitt Romney for President campaign. He remains a Republican candidate for Congress in the race to replace Gabby Giffords, as well as his position as county sheriff.

Let's review: it's OK to be gay, it's OK to keep running for Congress, it's OK to that you don't have to quit your job over a sex scandal that's really a massive abuse of power, but you HAVE to quit your position as head of Arizonans for Romney.

Got it. After all, it's not as if he was Tweeting pictures of himself to women other than his wife. If he had been doing that, he would have to resign from Congress.

Here's last week's local version of 'It's OK to be gay and abuse minorities, as long as it's just verbal abuse on conservative talk radio'. 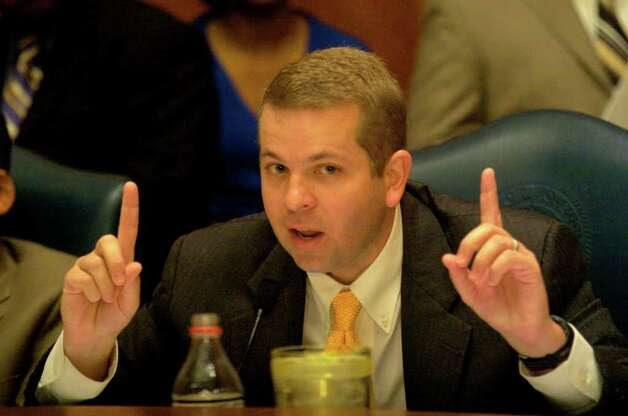 Security camera footage from a well-known gay bar has played a key role in a hit-and-run investigation of a former Houston City Councilman, who is now a conservative talk show host, Local 2 Investigates reported on Wednesday (February 16).

A Houston man reported to police that KTRH talk show host Michael Berry plowed his SUV into another car outside T.C.'s Show Baron Converse near Fairview in the Montrose area about 11 p.m. on January 31st.

Tuderia Bennett, of Galena Park, told Houston police that he was working as a bouncer at the front door during a popular cross-dressing 'drag show' that was going on inside the club. He watched the crash happen and told police he rushed up to the car after impact and got a good look at Berry behind the wheel.

Bennett wrote down the license number from the car that he said caused more than $1,500 in damage to his car. Then, when HPD officers traced that license tag to Berry, the victim said he had no doubt it was him.

HPD and the Harris County district attorney's office are apparently still deciding whether to files charges against Berry for hit-and-run.

A police source familiar with the investigation into a hit-and-run accident linked to former city councilman and radio talk show host Michael Berry said Houston Police Chief Charles McClelland is upset with the handling of the high-profile probe and is expected to order an internal affairs inquiry.

Berry has not been charged over the Jan. 31 accident, but HPD's crash report identified a car registered to him as the vehicle suspected in the crash. The owner of the car that was struck said Berry backed into his vehicle outside a gay bar in Montrose.

Berry maintains silence on this matter -- despite showing up for his talk show on KTRH since the story broke -- on advice from his attorney Dick DeGuerin (also French). Who is probably charging Berry much, much more than the cost of the damages to the bouncer's car.

Is it possible that an entire political party is made up of frauds? These two news items must just be coincidental. Aren't they?

Houston radio host Michael Berry spoke out against allegations that he was involved in a hit-and-run accident outside of a gay night club, slamming the media and saying he has been treated like “a member of Al Qaeda.”

Berry opened his KTRH radio show about the topic this morning and said the allegations against him were overblown and inaccurate. He said KPRC Local 2 reported the story last Wednesday to help boost its ratings during sweeps week.

“Was it a cover up?” Berry questioned. “No, it was a smear campaign. Channel 2, I’ve got my sights on you... You can smear my name without me but I’m not going down without a fight.”

Berry railed on the media and defended himself against gay activist groups who called into his program to criticize him. Berry said he has never spoken ill of gay people on his program and has instead spoken out against other conservative talk show hosts that make homophobic comments.

“Saying 'gay bar' and 'conservative talk show host' is too awesome for a news station to pass up because conservatives hate gays — or so we are told,” he said. “The only thing worse than a celebrity who gets it too easy is one who gets it too hard.”