"The last stage in any paranoid illness"

Matt Taibbi, always cogent, particularly so in this analysis of the Last Republican Debate of 2012.

(I)t was while watching the debate last night that it finally hit me: This is justice. What we have here are chickens coming home to roost. It's as if all of the American public's bad habits and perverse obsessions are all coming back to haunt Republican voters in this race: The lack of attention span, the constant demand for instant gratification, the abject hunger for negativity, the utter lack of backbone or constancy (we change our loyalties at the drop of a hat, all it takes is a clever TV ad): these things are all major factors in the spiraling Republican disaster.

Most importantly, though, the conservative passion for divisive, partisan, bomb-tossing politics is threatening to permanently cripple the Republican party. They long ago became more about pointing fingers than about ideology, and it's finally ruining them.

Really and truly, the old Republican moderates are going to be missed. George H. W. was one once upon a time, before the zealots blasted him on his support of Planned Parenthood, and then drove him out of office when he compromised on raising taxes. In the modern day, Dick Lugar of Indiana is now certain to be TeaBagged because he's been committing voter fraud for the past 35 years.

I will return to the subject of voter fraud at the end, after sampling Taibbi in the following.

Oh, sure, your average conservative will insist his belief system is based upon a passion for the free market and limited government, but that's mostly a cover story. Instead, the vast team-building exercise that has driven the broadcasts of people like Rush and Hannity and the talking heads on Fox for decades now has really been a kind of ongoing Quest for Orthodoxy, in which the team members congregate in front of the TV and the radio and share in the warm feeling of pointing the finger at people who aren't as American as they are, who lack their family values, who don’t share their All-American work ethic.

The finger-pointing game is a fun one to play, but it’s a little like drugs – you have to keep taking bigger and bigger doses in order to get the same high.

...(T)hey sit and wait for the return of a world where there was one breadwinner in the family, and no teen pregnancy or crime or poor people, and immigrants worked hard and didn't ask for welfare and had the decency to speak English – a world that never existed in reality, of course, but they're waiting for a return to it nonetheless.

The good old days. Happy Days. The Eisenhower years -- before those tacky things like the Voting Rights Act and the military/industrial complex. Back then they were only scared of the Russkies, the Bomb, and Black People.

Think Ron Paul in the South Carolina debate, when he said that in the '60s, "there was nobody out in the street suffering with no medical care." Paul also recalled that after World War II, 10 million soldiers came home and prospered without any kind of government aid at all – all they needed was a massive cut to the federal budget, and those soldiers just surfed on the resultant wave of economic progress.

"You know what the government did? They cut the budget by 60 percent," he said. "And everybody went back to work again, you didn't need any special programs."

Right – it wasn’t like they needed a G.I. Bill or anything. After all, people were different back then: They didn’t want or need welfare, or a health care program, or any of those things. At least, that’s not the way Paul remembered it.

That's all the early conservative movement was. It was just a heartfelt request that we go back to the good old days of America as these people remembered or imagined it. Of course the problem was we couldn't go back, not just because more than half the population (particularly the nonwhite, non-straight, non-male segment of the population) desperately didn't want to go back, but also because that America never existed and was therefore impossible to recreate.

Barry Goldwater, Richard Nixon and even Ronald Reagan -- who raised taxes and ran massive deficits that Bill Clinton cleaned up -- would all be to the left of today's Republican party, mostly as a result of this three-year-old phenomenon called the Tea Party. This condition is so acute, so diseased, so bad that none of the remaining Republican candidates wish to be described as moderate as George W. Bush, like Rick Santorum was last Wednesday. But back to Taibbi.

And when we didn’t go back to the good old days, this crowd got frustrated, and suddenly the message stopped being heartfelt and it got an edge to it.

The message went from, "We’re the real Americans; the others are the problem," to, "We’re the last line of defense; we hate those other people and they’re our enemies." Now it wasn’t just that the rest of us weren't getting with the program: Now we were also saboteurs, secretly or perhaps even openly conspiring with America’s enemies to prevent her return to the long-desired Days of Glory.

"Obama is a Kenyan Muslim Socialist". "Deport all illegals". You get the picture.

In the Clinton years and the early Bush years we started to hear a lot of this stuff; that the people conservatives described as "liberals" were not, as we are in fact, normal people who believe in marriage and family and love their children just as much as conservatives do, but perverts who subscribe to a sort of religion of hedonism.

"Liberals' only remaining big issue is abortion because of their beloved sexual revolution," was the way Ann Coulter put it. "That's their cause – spreading anarchy and polymorphous perversity. Abortion permits that."

So they fought back, and a whole generation of more strident conservative politicians rose to fight the enemy at home, who conveniently during the '90s lived in the White House and occasionally practiced polymorphous perversity there.

Taibbi has a summary of the W years, but I just can't live through even a minute of that again. I'll prefer to skip the Gingrich/DeLay/Armey years also -- go back over and get this if you want it -- so fast-forward from about 1994 to 2008.

And when the unthinkable happened, and a black American with a Muslim-sounding name assumed the throne in the White House, now, suddenly, we started to hear that liberals were not only in league with terrorists, but somehow worse than terrorists.

Try to notice how many times a conservative says or writes "destroying our country" or some close variation of that. Just for today, and make sure they aren't referring to the Russians, the Chinese, or even the Syrians or the Iranians.

See how many times you hear that mentioned. Just today.

All of the associated language -- the code words and the dog whistles as well as the obvious, blatant bigotry and hate -- that accompany this demonization is designed to do what the Ku Klux Klan used to do in the old days: Harass, intimidate, threaten. Without all of that messy killing and lynching, of course.

Those days, the mythological good old days, were still thriving in the late 1950s -- where today's Republicans, as Taibbi has noted, would wish the country to return. At least that far back, if not farther. 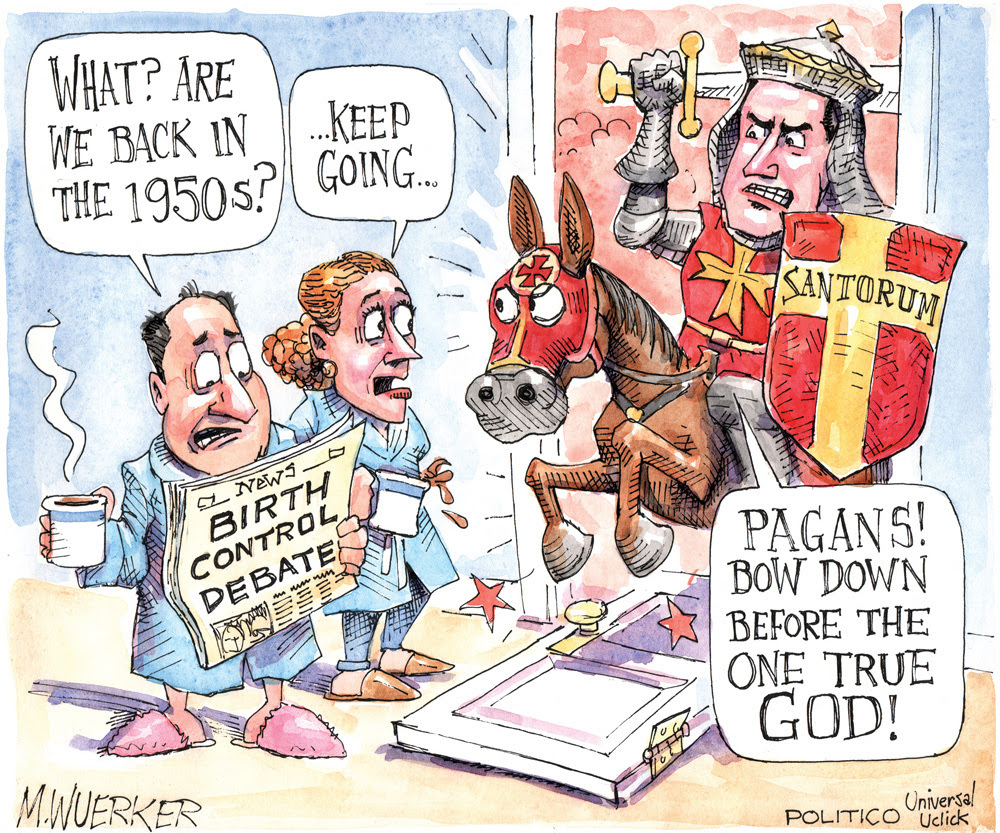 Taibbi has much more of this history and ties it all together, right up to Ash Wednesday's GOP debate in Arizona. I'll leave it to you to finish there. Here I will make my point about conservative paranoia as it relates to Voter ID legislation, the mythical voter "fraud", and our local contingent of Patriots who are taking their crusade across the country.

Once upon a time in this great nation -- I'm so old I remember it -- we encouraged people to vote. Voter registration drives were held at storefronts, a voter registration card came in your welcome-wagon packet, and by golly there was regular refrain from officials of all kinds (even teachers!) that voting should be your priority as a citizen.

The current iteration of the Republican party, however, decided they couldn't have that, though; when more people vote, they lose (see: 2008, and its polar opposite, 2010). So as a matter of survival they are now doing everything they possibly can to suppress voting.

Black box voting -- the assembly and counting of ballots electronically by machines they own, distribute, and sell to municipalities, and are both corrupt and corruptible -- wasn't enough to stem the tide. They had to turn to legislation that would address a problem that does not exist to any significant degree: they call it voter "fraud". It's as rare as unicorns and pink elephants (in fact the most serious voter fraud conviction in history was recently committed by the Indiana secretary of state, a Republican) but the Voter ID laws still passed, as much on the Republican paranoia that Mickey Mouse had cast fifty ballots in every precinct in the nation as the strength of their electoral victories in 2010 in statehouses across the country.

Here in Texas, Attorney General Greg Abbott sent agents from his office to a little old lady's house in Fort Worth to investigate allegations of voter fraud. They even peered in her bathroom window just as she was getting out of the shower, but they still couldn't find any evidence of voter "fraud". Abbott could have found some if he had looked at a Republican state senator Brian Birdwell, who voted twice in the 2004 presidential election... but again, Abbott wasn't looking for wealthy white male voter fraud.

As a result of all this voter fraud that Republicans have committed -- so goes the pretzel logic -- Democrats must be doing more of it, so local Republicans established an organization called True the Vote. What's more, they have weaponized it for 2012. It was born here in Harris County, they held a national summit here in Houston last year, its aim to spread nationwide -- especially through these legislative voter/photo id actions -- is ongoing and strengthening. How this strategy is executed, essentially, is that white people show up at minority-majority precincts and do whatever they can think of to intimidate black and brown voters; taking pictures of them, peering over their shoulders as they cast their ballot, and other discriminatory and illegal actions.

They have a goal for 2012 to stop 50 persons per precinct across the country from voting (those Mickey Mouse votes). They think they can win back the White House if they are successful.

Ultimately the long-term goal is to have only the people of their choosing eligible to vote: aka wealthy white property owners. We used to refer to them as slave masters. In other words, when you hear the words 'follow' or 'restore' the Constitution, what they mean is the Constitution as the Founders intended in 1787 (Google 'Three-Fifths compromise'). Calling themselves 'Patriots', wearing tri-corner hats, US flag shirts and lapel pins -- their gang colors -- is all part of the mental illness as well.

So, to conclude a long post, if you like all of that and want more of it, you know who to vote for. And if you don't like any of that and don't vote, you're doing nothing but enabling the mental illness that consumes today's Republican party.
Posted by PDiddie at Friday, February 24, 2012