Prima-caucus lives, and the potential fallout

Executive summary first from the R.G. :

Tempers flared today as delegates to the Texas Democratic Convention accused each other of racism and ignoring the needs of the infirm, elderly and soldiers overseas.

But in end they overwhelmingly voted 5,602-1,930 to keep the controversial Texas "Two-Step" system of allocating presidential nominating convention delegates through a hybrid of a primary and election-night caucuses.

Some portrayed the fight as the continuation of the 2008 battle between Hillary Rodham Clinton and Barack Obama. But others said problems in that election showed the shortcomings of the system.

Many Democrats were angered in 2008 because Clinton won the most votes in the primary but Obama out-maneuvered her in the caucuses to win the most nominating delegates: 95-91.

After hours of debate in the convention rules committee and another hour of heated discussion on the Democratic convention floor, the delegates voted to retain the hybrid system rather than go to a system of allocating all presidential nominating delegates based solely on the primary vote.

This is solid as to the synopsis and conclusion, so I'll just fill in some of the on-the-convention-floor color.

Royce West, the state senator from Dallas, was first to speak from the floor during the discussion and almost immediately played the race card, suggesting that eliminating the caucus would "disenfranchise" some activist African-Americans whose communities conduct politics as close-knit, neighborhood affairs. 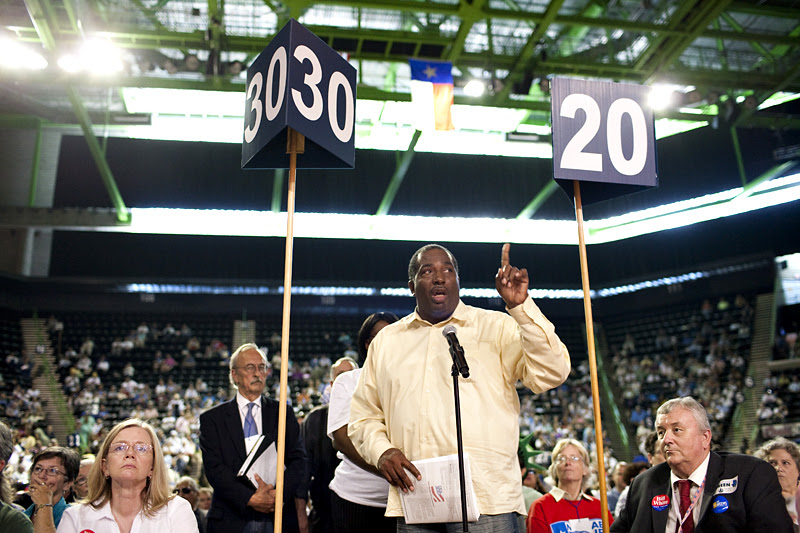 Some speakers after West picked up the gauntlet, suggesting that shift workers, the disabled, seniors and soldiers serving overseas were in fact the ones being disenfranchised by their inability to participate in the election-day-evening precinct conventions.  And some called bullshit on that. From the Texas Tribune's live-blog (2:29 pm entry):

Leroy Warren Jr., a Democrat from Collin County, got fired up at the mic. He wants to keep the two-step primary election process that allowed Barack Obama to get more delegates to the Democratic National Committee even though Hillary Clinton won the popular primary vote. He says others are using the veil of protecting minorities to try to change a system that allowed the black candidate to win election.

"These shenanigans ought to stop right now, and they ought to take that minority report and go trash it." ...

A couple more Af-Am delegates followed, echoing and amplifying West's 'disenfranchised' comments. And some others rebutted. It was uncomfortable and unpleasant, to say the least.

I would like to respectfully point out that "disenfranchisement" as defined here is entirely the wrong word to use to describe the caucus participation/effect:

Nobody is being deprived of their right to vote either by keeping or deleting the caucus portion of the delegate allocation. No one.

The caucus rewards those activists who take responsibility to get off their couch and go participate with their neighbors in the political welfare and future of their 'hood, their state, their nation. It doesn't penalize anybody. It's a valuable component of our democracy, IMHO.

(As Ratcliffe noted above, the caucus itself was not being ended by the proposed changes in the rules committee's minority report; only the math would change. But the math would disembowel the caucus' effect on delegate count; some consequently argued that was a distinction without a difference.)

So despite being a big fan of the prima-caucus -- and voting in favor of it -- what bothered me the most was the misunderstandings associated with the question and the divisions it opened.

I believe that Boyd Richie -- and by proxy, Bill White -- must mend fences with those who favored change (again, in the form of eliminating the mathematical emphasis given to the caucus results) and who lost that battle decisively. Indeed those appear to be RGV Latinos who preferred Clinton in 2008, and are being heavily relied upon to carry Texas Democrats up and down the ballot to victory in November. That same percentage of people (see the 12:24 pm TexTrib live-blog entry) supported Richie's challenger, Mike Barnes, and the endorsement Barnes received yesterday was from the Hispanic caucus ... a significant sign of weakness for Richie, despite the efforts of Democratic establishment Hispanics to downplay it.

I think there will be more unity demonstrated  coming out of Corpus if only because of political necessity.  But if I'm wrong, this could be the harbinger of doom. Latinos aren't going to vote Republican because of stuff like this but they may stay home on Election Day, and they have historically done far too much of that as it is.

See The Texas Blue for another take.
Posted by PDiddie at Saturday, June 26, 2010