Revenge of the Senate Nerds

A wise Latina woman with the richness of her experiences would more often than not know that a gaggle of white Republican men afraid of extinction are out to trip her up.

After all, these guys have never needed to speak inspirational words to others like them, as Sotomayor has done. They’ve had codes, handshakes and clubs to do that. 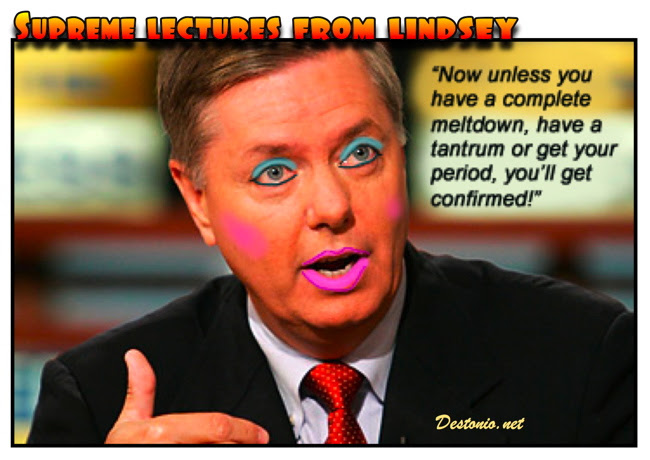 Graham read Sotomayor some anonymous comments made by lawyers about her, complaining that she was “temperamental,” “nasty,” “a bit of a bully.” Then he patronizingly lectured her about how this was the moment for “self-reflection.” Maybe Graham thinks Nino Scalia has those traits covered. ... Graham said Sotomayor would be confirmed unless she had “a meltdown” — a word applied mostly to women and toddlers until Mark Sanford proudly took ownership of it when he was judged about the wisdom of his Latina woman.

That tops Tom Coburn's impression of Ricky Ricardo (do you think the senator from Oklahoma knows the difference between Cuban and Puerto Rican?) and Jefferson Beauregard Sessions III's cornpone-and-hayseed-flavored bullshit. Our own John Cornyn's monotonous and repetitive droning actually comes in fourth in the competition. Some however will say it was his time to shine.