The GOP's politics of resentment 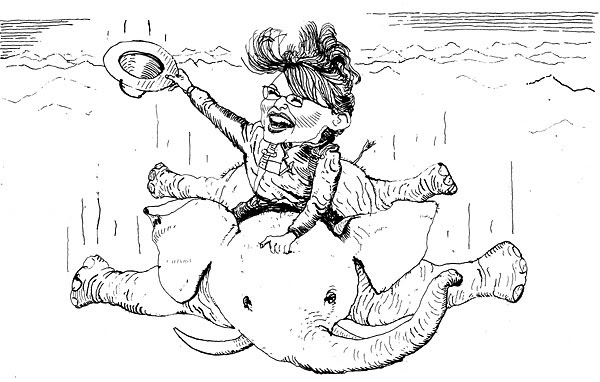 Another blistering from Frank Rich:

Sarah Palin and Al Sharpton don’t ordinarily have much in common, but they achieved a rare harmonic convergence at Michael Jackson’s memorial service. When Sharpton told the singer’s children it was their daddy’s adversaries, not their daddy, who were “strange,” he was channeling the pugnacious argument the Alaska governor had made the week before. There was nothing strange about her decision to quit in midterm, Palin told America. What’s strange — or “insane,” in her lingo — are the critics who dare question her erratic behavior on the national stage.

That's going to sting for a few minutes.

Sharpton’s bashing of Jackson’s naysayers received the biggest ovation of the entire show. Palin’s combative resignation soliloquy, though much mocked by prognosticators of all political persuasions, has an equally vociferous and more powerful constituency. In the aftermath of her decision to drop out and cash in, Palin’s standing in the G.O.P. actually rose in the USA Today/Gallup poll. No less than 71 percent of Republicans said they would vote for her for president. That overwhelming majority isn’t just the “base” of the Republican Party that liberals and conservatives alike tend to ghettoize as a rump backwater minority. It is the party, or pretty much what remains of it in the Barack Obama era.

That’s why Palin won’t go gently into the good night, much as some Republicans in Washington might wish. She is not just the party’s biggest star and most charismatic television performer; she is its only star and charismatic performer. Most important, she stands for a genuine movement: a dwindling white nonurban America that is aflame with grievances and awash in self-pity as the country hurtles into the 21st century and leaves it behind. Palin gives this movement a major party brand and political plausibility that its open-throated media auxiliary, exemplified by Glenn Beck, cannot. She loves the spotlight, can raise millions of dollars and has no discernible reason to go fishing now except for self-promotional photo ops.

There's a lot more to sink yourself into, including the inevitable comparison to Dick Nixon and the "kick around" speech.

(Let's try to remember that Nixon did make a big comeback, before he scowled away into history as America's worst president ever ... until, of course, the most recent Republican.)