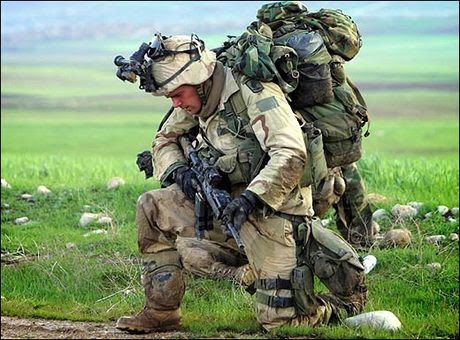 Paul Rieckhoff, of Iraq and Afghanistan Veterans of America:

While people are lighting up their grills, or spending a day off at the beach, it's important to remember the real reason for today's holiday.

Today marks a solemn day of remembrance for the more than 1 million American heroes of all generations who gave the ultimate sacrifice on the battlefields, defending our country.

To me, Memorial Day means paying tribute to heroes like Navy Lt. Michael Murphy, who was posthumously awarded the Medal of Honor for his selfless bravery. In the mountains of Afghanistan, Lt. Murphy's team was discovered and assaulted by more than 30 Taliban fighters. The ensuing firefight left one member of the team dead, and the other three injured.

Murphy was mortally wounded as he fought his way to an unsheltered position where he could transmit a call for support. But he fought on, requesting immediate support for his team. He gave his life to save his comrades.

There are no words that can adequately express our debt to the men and women of all generations who have paid the ultimate price in service of our nation. But we should take the time to honor their sacrifice today, and every day of the year.

I spent some time in the cemetery yesterday, looking at the red, white and blue flowers, and the tiny American flags gracing the headstones. One I walked past was a veteran of the Spanish-American war. He had been born in 1869, and he passed in 1940. As I pondered his life, it occurred to me that he probably knew men who fought in the Civil War, maybe even at the Alamo. He fought in the army with Teddy Roosevelt and the Rough Riders and the charge up San Juan Hill. He may have avoided WWI, but lived through most of the Great Depression and perhaps read newspaper headlines (generated by that old war mongerer W.R. Hearst) about the rise of the German Reich. He witnessed the transformation of the American economy from agrarian to industrial, the birth of the automobile, the dawn of the petroleum age.

Say a word of thanks to a vet today, and pay some small tribute to their service and their life.
Posted by PDiddie at Monday, May 25, 2009