I don't think Mike Huckabee is going to be earning Deadeye Dick Cheney's endorsement, either:

Days after national Republicans launched a new campaign to broaden the party's outreach, former upstart presidential candidate Mike Huckabee says the GOP is at risk of becoming "irrelevant as the Whigs."

In an interview with the California newspaper The Visalia Times-Delta, Huckabee said the GOP would only further decline in influence should it alienate social conservatives — largely considered the most energetic and loyal faction of the party.

"Throw the social conservatives the pro-life, pro-family people overboard and the Republican party will be as irrelevant as the Whigs," he said in reference to the American political party that largely disbanded in the mid 1800s.

"They'll basically be a party of gray-haired old men sitting around the country club puffing cigars, sipping brandy and wondering whatever happened to the country. That will be the end of the party," he said in the interview published Thursday.

Then again, who the hell said the evangelicals were getting thrown overboard, anyway? What teabag is Huck steeping? 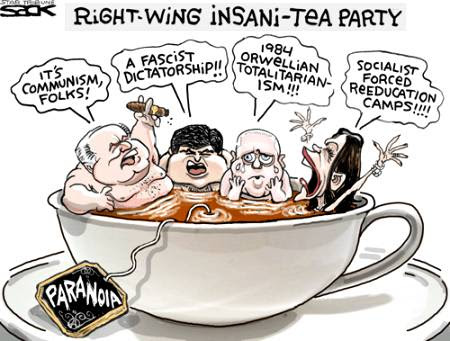 It's just amazing to me that the voices of the GOP at the moment are literally Rush Limbaugh and Dick Cheney. And Limbaugh is still pimping Sarah Palin.