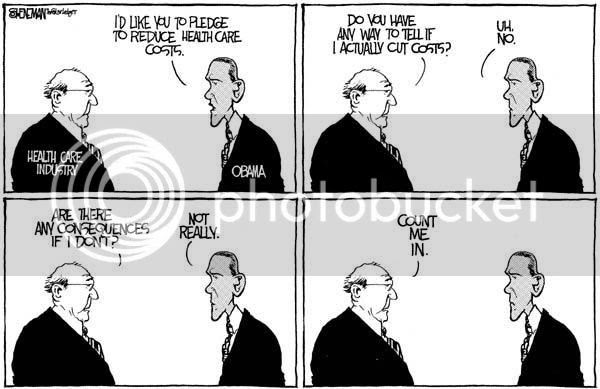 President Obama on Monday praised health care industry groups for coming together to try and cut $2 trillion in expenses over the next decade to slow the rising cost of medical care.

At a White House news conference flanked by industry officials, Obama called the meeting of officials "who often fought with each other" a "historic day, a watershed event in the long quest for health care reform."

Bullshit. $2 trillion can be "saved" in healthcare costs? What is being lost? Healthcare profits? Research?

"If these savings are truly achieved, this may be the most significant development on the path to health care reform," said Ron Pollack, executive director of Families , which advocates for expanded health care coverage. "It would cut health costs for families and businesses, and it would enable adequate subsidies to be offered so that everyone has access to quality affordable health care."

Six medical trade groups, including the and America's Health Insurance Plans, which represents health insurance companies, have agreed to the cost-cutting. Health care costs would continue to rise, just not as quickly.

That last sentence still isn't a satisfactory explanation. Jeffrey Young at The Atlantic shares my skepticism:

Organizations representing the biggest players in the health care market promised President Obama on Monday that they'd find ways to cut national health spending by an astonishing $2 trillion over the next 10 years. Later that day, executives from these industries told the press that their companies' bottom lines would not suffer as a result. Whatever happened to Alfred E. Neuman's Cosmic Health Care Equation?

Among other things, this seems to be the latest example of health care industry lobbyists and executives trying to reassure investors that the sweeping reform plan being assembled by the Obama administration and the Democratically controlled Congress isn't going to put them out of business.

I'm still a great deal less concerned about the impact of this on the companies' stock prices, but that's just me.

At a press briefing in Washington Monday, health care executives were asked to explain how, for example, physicians and hospitals could maintain their incomes if spending were $2 trillion less over 10 years.

"I do believe that these savings can be achieved without detrimental impact on all of the groups that you described," Thomas Priselac, the president and CEO of Cedars-Sinai Health System said. "It will be important as we go through this reform that the payments that are provided be adequate for people to do what it is we're talking about in a new and different system."

Here's what Jay Gellert, President and CEO of the insurance company Health Net said: "I think we believe that we can do it without undermining the viability" private health care companies, he said. "The unique opportunity that we have now is to provide care to 40 or 50 million people if we successfully do this."

"I think that overall, that the efficiencies we'll bring will more than make up for the cuts, for the savings that we gain," Gellert said.

There's that smell of feces again. Besides the two corporate titans listed above, the assembled participants included PhRMA President (and former Congressman) Billy Tauzin, the heads of Merck, Kaiser, and the AMA, and SEIU chief Andy Stern.

I'm almost as disappointed in Stern helping peddle this crock as I am Obama.