Half-baked Alaska (or, Cheney in a skirt) 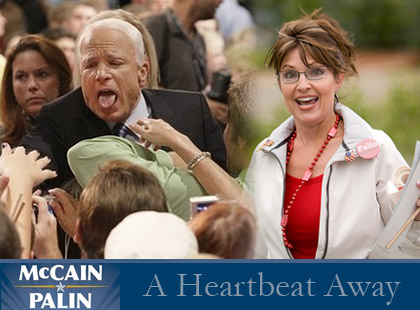 The right-wing freaks had little to rejoice about during the past week, but the selection of one of their own by a befuddled John McLame sent them into a tizzy. Denied by the Religious Right his first choice, turncoat Joe Lieberman, Senator Maverick chose instead to pander to them. And despite their entire Monday lineup of speakers canceling on them -- the Governator has a budget battle he would rather fight, W and Dick want to appear as if they are doing something about Gustav -- the RNC delegates go right on partying with the fabulous hookers in the Minneapolis-St. Paul airport stalls proceed with the solemn business of their convention today.

There's about a thousand controversies swirling around Sarah Palin, the gun-totin', beauty-queenin', rapidly-breedin', earmark-lovin', polar-bear-hatin' governor of a state with just about the same number of people as Fort Worth (and just as backward and conservative).

Personally, I do think she squeezed out that puppy herself. That's not much of a scandal anyway, in my book. But she's got so much baggage that she could probably save Alaska Airlines from bankruptcy just on the extra suitcase charges alone. And let's not even get started on that Neanderthal husband of hers, a piece of neocon work his own self.

Among the things Sarah has already learned in the past week: it's warm in Ohio this time of year.

Can't wait for the debates.
Posted by PDiddie at Monday, September 01, 2008