Far, far too much sad news this past week:

There remains among Western commentators a surprisingly persistent mythology of Soviet rule. This depicts Stalin as the usurper of Lenin's revolutionary asceticism, with Khrushchev and his successors tempering the bloodiest excesses. In reality, the grey bureaucracy of Khrushchev and Brezhnev laid claim to the individual mind. It defined political difference as mental illness.

On being released from the camps, Solzhenitsyn became the voice and dramatist of the zeks, the prisoners who languished in a system where the merest idiosyncrasy was an antisocial act. He became, with the dissidents Andrei Sakharov and Anatoli Scharansky, a towering moral witness against this system. And he was fearless.

I am reminded of that tiresome conservative canard about liberalism being a mental disorder as I read that last sentence in the first paragraph. 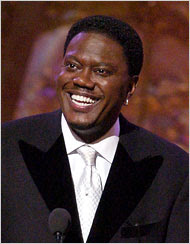 Bernie Mac blended style, authority and a touch of self-aware bluster to make audiences laugh as well as connect with him. For Mac, who died Saturday at age 50, it was a winning mix, delivering him from a poor childhood to stardom as a standup comedian, in films including the casino heist caper "Ocean's Eleven" and his acclaimed sitcom "The Bernie Mac Show."

Though his comedy drew on tough experiences as a black man, he had mainstream appeal -- befitting inspiration he found in a wide range of humorists: Harpo Marx as well as Moms Mabley; squeaky-clean Red Skelton, but also the raw Redd Foxx.

Saturday before last my wife and I attended a funeral service for a friend from college -- heart attack at 47 -- who was so much like Bernie Mac it was scary. Terrific smile, wonderful person, gone too soon. Fabulously funny, loved a good party, lived life to the max. Too many more parallels to iterate. His passing last week is magnified by Bernie Mac's this one.

Paul Newman has finished chemotherapy and has told his family he wants to die at home. ...

Yesterday, it was reported in America that Newman, 83, had only weeks to live and had returned home to his wife, Joanne Woodward.

"Paul didn't want to die in the hospital," a source said. "Joanne and his daughters are beside themselves with grief."

The source, described as a close family friend, said that the star had spent the past few weeks getting his affairs in order.