"They referred all questions to their attorneys..." 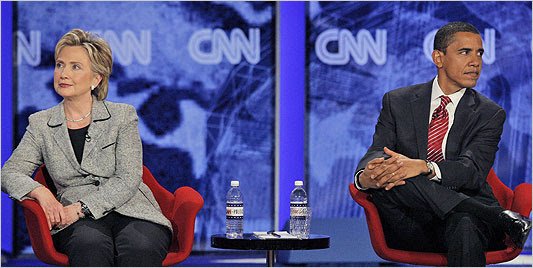 "... but it was clear from their body language that the two had not shared the same bed for quite some time."

Line of the evening goes to Dennis K:

"In the last debate, Hillary Clinton was criticized by John Edwards for some trade-related issue," said Kucinich. "But the fact of the matter is, John, you voted for China trade understanding that workers were going to be hurt. Now, you're a trial lawyer, you knew better."

When given the chance to respond, Edwards said, "I'm not sure what being a trial lawyer has to do with it."

"Cute," Edwards responded before emphasizing the need to stop big corporations from lobbying the federal government."

Kooch was the only candidate on the stage to qualify his support for the eventual Democratic nominee. I think this signals a third-party run for him.

Looks to me like Hillary won the evening, not only because the media is all saying so, but because Obama stumbled again on driver's licenses for undocumenteds and Edwards ... well, Edwards got knocked around a few times and even booed by the very pro-Hillary audience.

Her competition is busily conceding Nevada to her.

Inevitability creeped back quite a bit last night.